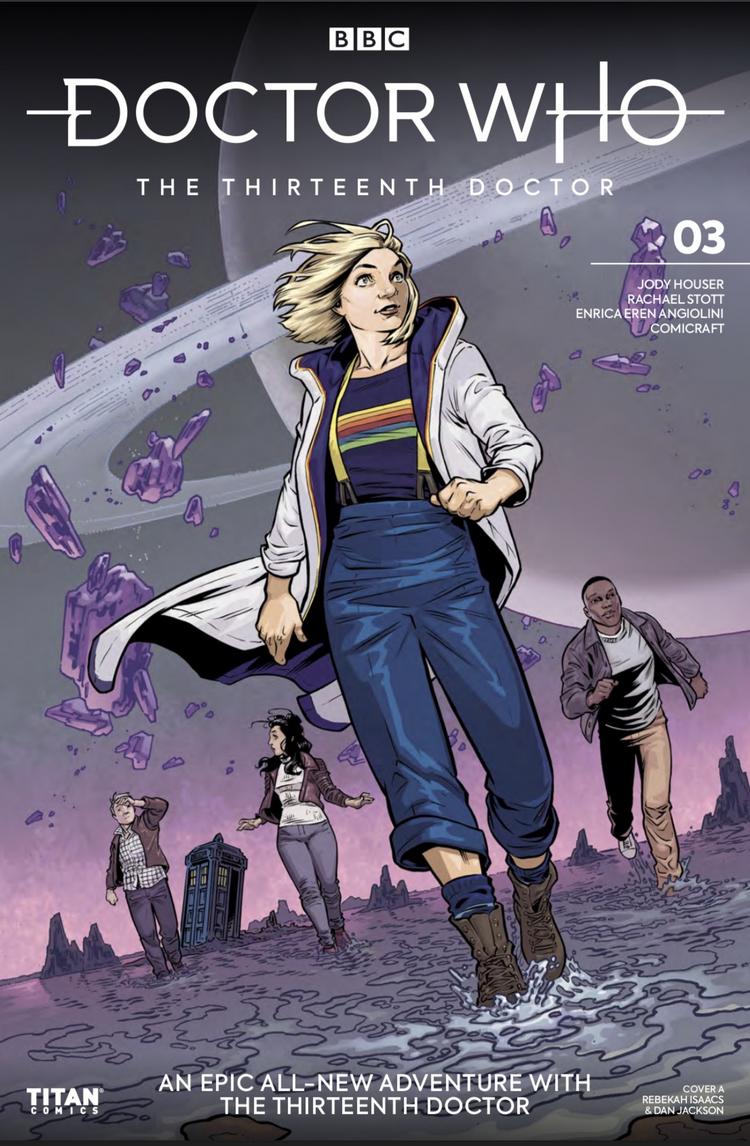 The sign of a solid licensed material issue is when you can hear the voices of the actors/characters in your head. When the dialogue feels genuine to what you’ve seen in other media there is an extra level of comfort added to the read. It’s an unfair standard that comics based upon other media have to live-up to with each story. So far, the Thirteenth Doctor’s time in comics has lived up to this standard, despite a somewhat slow start.

This issue continues the serial begun with the first. Two scientists, on the cusp of time travel, find themselves kidnapped and blackmailed into stealing for an grotesque and over the top alien they’ve nicknamed “The Hoarder.” Reminiscent of MCU’s Collector, it’s an alien that wants everything… and that includes living beings. All of this exposition is laid out over a spot of tea, after a rather traditional interaction involving someone holding a gun on the Doctor and her fam, in the TARDIS. Long time fans could probably predict what would happen before it does. Doesn’t make the opening interaction any less delightful or humorous.

Throughout the backstory and tea time there are nuggets of nerdy Easter Eggs that are familiar in both Jody Houser’s stories, such as her work in Faith, as well as in Rachael Stott’s artwork. It’s unclear who thought giving the Doctor a #1 Dad in the Universe mug or a Mrs. Pott’s teapot, but their all hilarious touches and gave me fangirl squeals.

The color work by the art team is vivid. Strong outlines, large amounts of shadow work and textured backgrounds in the TARDIS all help to sell the atmosphere. There is plenty of room for the tight and to the point dialogue, without it feeling boring or sluggish. The lettering team makes everything look succinct, even if lots of information is being provided. Stott’s faces are expressive and match the actors, as much as ever. There are a few panels where it feels like this enthusiasm for Jodie Whittaker’s expressions are a little over the top. It’s rare that I find facial expressions take me so far out of the story, as they do with this issue. I cannot tell if it’s inherent in the artwork or the dramatic shadowing from the color palette. All the parts that work so well together and are on point in the rest of the story are the very things that clash when Thirteen is making a massively scrunched up face. Everything else is clear, and lovely and makes you feel like you’re in the latest adventure with your favorite self-adopted space family.

The first two issues felt like they were trying to keep just enough of the plot hidden to create mystery, which only resulted in some muddled storytelling. Here we have a much more clear picture about the various side characters, their motivations and the risks. It all culminates in an Indiana Jones style adventure, which of course Ryan comments about. Yaz gets the chance to play cop, and show her distrust, while Graham gets a chance to show understanding. Art, storytelling and lettering blend seamlessly at these points making the story flow quickly, despite how much of it is just exposition.

I’m normally an advocate for going back and reading the previous issues of a series, so you don’t feel lost or that something is missing. However, looking back over them, I feel like I wouldn’t have been as confused about the story if I had just started with this third issue. It’s fast paced, to the point, exciting, with small bits of delightful humor, charm and reliable Doctor Who tropes (such as the Doctor’s feelings about guns). Fans of Classic and New Who will recognize various parts of the Doctor’s personality throughout this story, while allowing Thirteen and company to sounds true to themselves and the series.