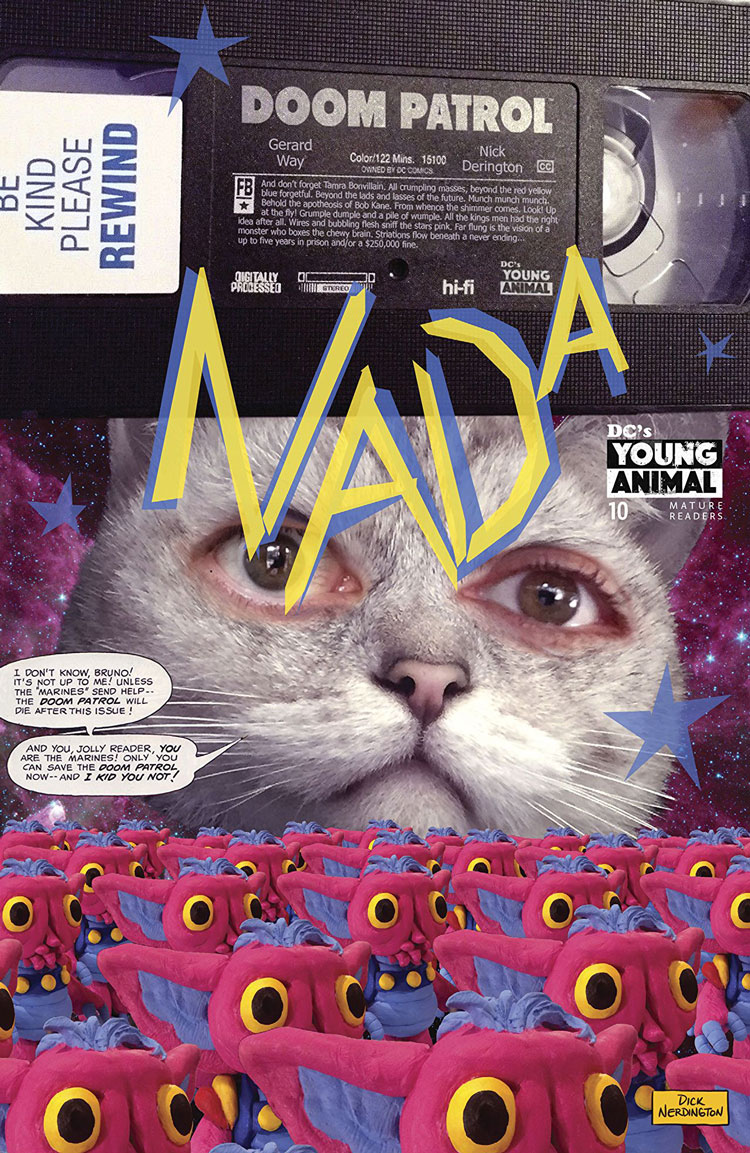 The world never saw it coming, and in Doom Patrol #10, it almost ends everything. What an awesome way to go.

Gerard Way turns in what has recently been revealed to be the penultimate issue of this run (for now?) and Jeremy Lambert gets a special thanks, so he did good, presumably with a writing assist. The story in this issue is bananas. In a blender. Then frozen, broken, and put in another blender, set to “smooth”. All of the threads throughout this series merge in Doom Patrol #10 – from Lucius Reynolds and the dead squirrel to Terry None’s first appearance, tap-dancing her way into our lives.

And not one bit of this zaniness could have materialized without an ace team on art.

On the art side of things, the regular visual contributors – Nick Derington (pencils), Tom Fowler (inks), Tamra Bonvillain (colors), and Todd Klein (letters) – get the usual credits and do their usual amazing work. Each of them contributing nothing but stunning, study-worthy efforts to this issue.

Yes, so very much of the visual punch in the face is directly from the pencil work of Derington (Poopers diapers under Flex’s arms and magnetic vowels marching through the street). Bonvillain matches Derington’s inventiveness, giving each character in the story slightly different coloring, which is, in and of itself noteworthy, particularly given that Doom Patrol #10 includes EVERYONE from this series, but it so much more remarkable in that Bonvillain treats the characters through light sources, like having the light come from Flex Mentallo’s left – aligning with the fixture in Lucius’ room as Flex stands just inside the doorway.

As for Derington, every single panel has depth, and craziness packed into those depths. Doom Patrol #10 has everything from 50% Chad literally stomping Flex Mentallo towards failure to a man-eating mustachioed frog, and oh, so very much more. As I mentioned at the top of this review each and every one of the creators brings their absolute best to make this adventure a visual spectacle beyond compare.

Tom Fowler inks everything Derington puts down, which on one panel alone contains fourteen characters running amok in a store, with shelves and displays of merchandise all clamoring for attention. That panel also makes for a single-image showcase of the requirements of an inker, as Bonvillain tackles some of the shadows through gradient, but some of the other characters are wearing leather jackets, combat boots, tuxedos, leggings, and more, like Keeg and Nobody who are black-shaded characters.

Klein keeps track of the action, clues in the readers, and augments the action, with classic looking effects like “KRASH”ing windows and the “WEEOW WEEOW” of a claxon blaring around and through the abundant dialog of this issue. The characters carry different tones and pitches, reflecting the action, naturally. Terry None’s labor pains have uncertainty and pain, while there is clear intent and potential menace in Sam Reynolds’ declaration of “GET AWAY FROM MY BOY!”

All of this – big blue hippos and inflatable pandas, Mr. Nobody and Richard the clerk at Retconn – comes together so delectably that Doom Patrol #10 stands no chance but to be read and re-read, studied, analyzed, dissected, and sampled. This issue IS Doom Patrol, and Way, Derington, Fowler, Bonvillain, and Klein make sure there is no mistaking this for any other title, giving us everything Doom Patrol can be, has been, and should be all in one story. There’s uncertainty in the certain, mystery in the solved, and fun in the danger, and it all comes together so very, very nicely.