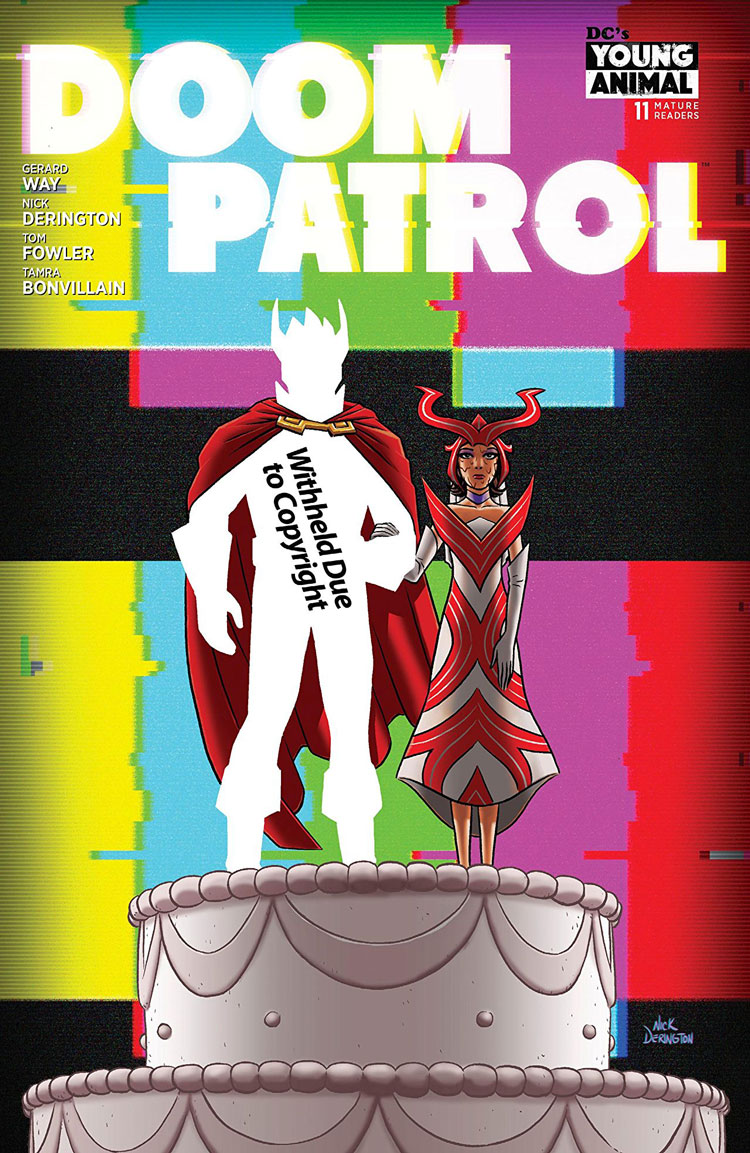 “At the Bottom of Everything” brings a close to Gerard Way’s Doom Patrol series under the Young Animal imprint. Except it doesn’t. Well, it does, but only because things got a bit out of whack, but that’s in reality, not comic book continuity.

For readers who didn’t wait to read “Milk Wars,” this issue will fill in some gaps. For those who have never heard of a “Milk War”, well, this is the next chapter in the adventures of the Doom Patrol.

Written by Gerard Way, drawn by Nick Derington, inked by Tom Fowler (who also provides a tremendous variant cover!), colored by Tamra Bonvillain, and lettered by Todd Klein, Doom Patrol #11 wraps up everything from this run, but teases out some pieces that are picked up in “Milk Wars.” You want to know about the gyro and how Cliff got to be where he was? It’s here. The deceased alien who was assaulted by someone wielding Danny the Brick? Also here. So it is that Doom Patrol #11 takes all the divergent threads Way had started and brings them together in a satisfying conclusion.

The main characters in the Patrol get sufficient panel time, but this issue has a manic pace, as there are a number of stories to finish. In Doom Patrol fashion, Way and company throw in a few twists, some surprises and some dodges. Had this released near its originally slated release date (November 22, 2017) or at least before the Young Animal “Milk Wars” crossover, it would have been more poignant. Instead, it comes off a bit anticlimactic. It’s still fun, mind you, and taken on its own merit, its head and shoulders more engaging than a bunch of other comics.

A major contributor to the high engagement factor is the magnificent artwork from Derington. With a solid assist from Fowler, Derington is able to pack the twenty-six story pages full. Lucius makes an appearance, as does Lotion. Rita’s transformation is stunning and painful, Flex Mentallo is rugged and strong, and the skirmish in Doom Patrol #11 is smartly choreographed. Derington shifts the camera angle around, investigates the characters, and then piles in the details.

Bonvillain and Klein are both given plenty of opportunities to show their craftsmanship, as the twenty-six pages don’t include a single splash page, but do include some top-flight villainous monologging and plot explanation. Bonvillain is able to reach deep into the digital crayon box, and uses a fun range of colors throughout, anchoring the story in warm coral hues in the showdown in Final Heaven. The baddie of the piece – Haxxalon – explains everything and even sets up “Milk Wars” tale through near-countless caption boxes that Klein treats just differently enough to give Haxxalon a tone that doesn’t blend into the rest of the story.

The Young Animal Doom Patrol experiment was a fun one, and fans of the whole Patrol certainly benefited with a great story fraught with delays as it was. Way had some ideas that were of the Doom Patrol cloth, and he worked those ideas nicely, as solidly evidenced in Doom Patrol #11. Some of those ideas could have used a bit more marinating. Some could have used a bit more Doom Patrol. This is a fine farewell to a fun adventure – a fitting homage to the parts of the Patrol Way and crew chose to celebrate.

I’m not sure where the Doom Patrol goes from here – if it’ll be more Young Animal or back in the DC Universe proper – but I definitely know I’ll be coming back to re-read this series again.