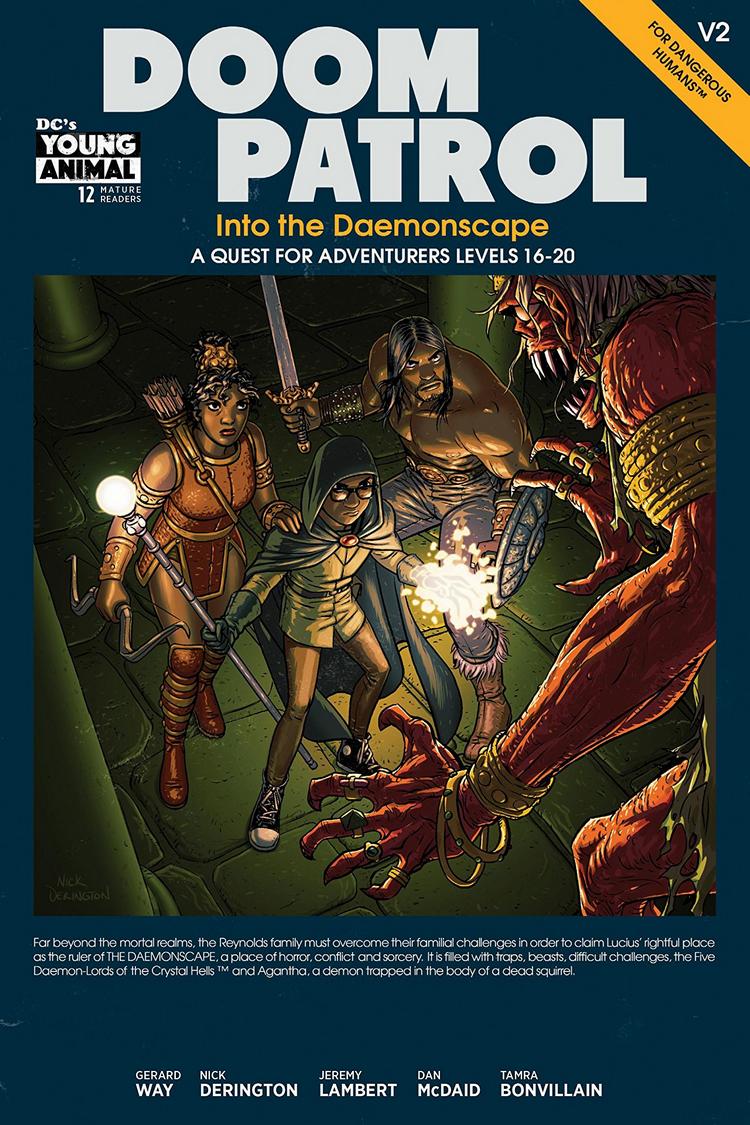 More than two years after the first issue of the Young Animal iteration of the Doom Patrol hit the stands, the twelfth issue is finally here. Yeah, there were a few delays, but waiting for Doom Patrol is something fans of those fabulous freaks have gotten accustomed to.

So we finally get Doom Patrol #12. Gerard Way, Nick Derington, and Jeremy Lambert are all credited with writing this issue. Dan McDaid jumps onboard to draw the issue, while series’ regulars Tamra Bonvillain and Todd Klein handle the colors and letters accordingly. This issue introduces us to the Daemonscape, following Lucius Reynolds and his demonic guide squirrel on an adventure unlike anything in Doom Patrol comics of late.

This is a fun diversion from the “typical” Doom Patrol fare, but given the scarcity of fresh Doom Patrol adventures, it seems a touch misleading – enjoyable, but misplaced. I would have definitely preferred to read another tale of Cliff, Casey, Larry, Jane, Flex, and crew, but we get what we get.

Taken on its own merits, Doom Patrol #12 is a fun fantasy tale directly in line with the Dungeons and Dragons vibe transmitted by the standard cover drawn by Nick Derington. Except it goes a step further and picks up the family theme that has threaded through the Young Animal Doom Patrol series. The family in this case is the Reynolds family – Sam, Val, and Lucius. Sam was introduced in the first issue of this run, with the rest of the family soon following. Paramedic partner to ambulance-driving Casey Brinke, Sam was almost our every man gateway into this series, but he didn’t have a consistent presence throughout the series, as Gerard Way’s ideas continued to grow organically with each subsequent issue.

McDaid’s art is keenly detailed, carrying hints of Derington’s work, but not unnecessarily. McDaid falls somewhere between Derington and Tom Fowler, and the fantasy setting of Doom Patrol #12 nestles into that style quite nicely.

Likewise, Bonvillain is at home in the Daemonscape. Able to conjure magentas and purples into the skies and entities of the new-to-us world, Bonvillain balances the colors nicely throughout, boosting the Reynolds family into the spotlight without actively constructing a spotlight around them.

Klein, per usual, delivers tremendous sharp lettering. The arrow “THUNK” and the falling screams fit nicely around McDaid’s art, without getting lost or demanding more attention than their place in the story. Likewise, Klein balances the word balloons nicely, and gives the lilting tails to create a sense of wonder present in the cast as they explore this new world around them.

Doom Patrol #12 is a great divergence. It’s not a Doom Patrol story, but there really is no better place in the current DC Universe to introduce this type of tale. There’s potential for the further adventures of the Reynolds family, and I hope we get to read them one day. Next time I see a Doom Patrol title on the racks, though, I really hope it includes Robotman, Crazy Jane, Negative Man, and the rest of the Niles Caulder’s collection of outcasts in some combination or other. Maybe the Reynoldses can appear, or even have a backup tale, but the focus should be on Doom Patrol itself.