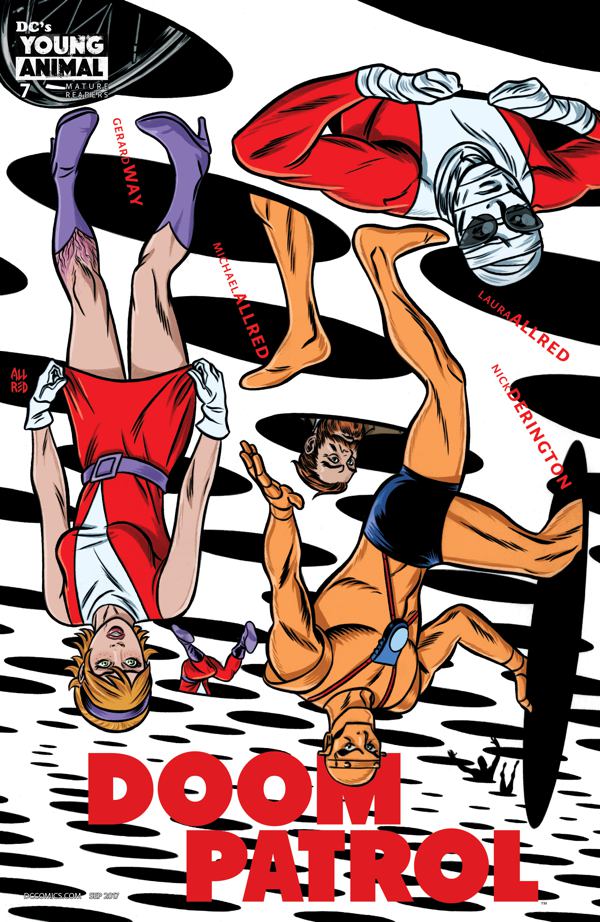 Your illustrious leader is back, Doom Patrol! Finally!

….or not. Straight up, I’ve read exactly zero Doom Patrol comics before this Young Animal run, so my history with Niles Caulder is not vast. I have, however, listened to a lot of Waiting For Doom (fabulous podcast, but don’t tell them I said so) and what I’ve gleaned from their discussions is that Niles Caulder is like the fuckup version of Professor X with a bit of stereotypical-60s-smart-guy mixed in for giggles.

This issue really drove that home for me.

Gerard Way’s writing in this issue continues his stellar work on the title thus far, bringing readers into a world of fantastic strangeness and utter insanity. The pacing of this issue is fabulous, and what struck me most about Way’s writing is how well he collaborated with the Allreds. Mike and Laura Allred are comic book forces of nature, but there are certain stories and types of tale that they absolutely crush and this is one of them. Way does a great job of taking this new Doom Patrol and and trying to stuff them back into their old box, showing how this group is not the team that Niles once headed up, despite his desperate need to lead them again. This group will not fall back on old patterns willingly, which readers find out in a number of absolutely hilarious ways. The dialogue is spot on and the situations this team finds itself in continue to baffle my brain. It’s wild, it’s crazy and I love every second of it.

I’ve already called the Allreds forces of nature and dammit, I meant it. Every page they produce in this issue is flawless and they do an amazing job of putting this team back in the old uniforms and roles and making it feel awkward as all hell. They capture these personalities so well that you can feel that this team is a square peg trying to fit into a round hole when being led by Caulder. Mike’s pencil work and Laura’s colours sell the fact that this just isn’t the team it was, and this is never going to work. The characters are wildly expressive and this comic is a visual joy to read. Their work is the perfect blend of the retro feel of the team trying to return to their roots, but being completely unable to.

Nick Derington’s pair of pages shocked me for one reason and one reason alone: I didn’t realize it wasn’t the Allreds. Until I was preparing the solicit info at the top of this review, I didn’t realize this entire issue wasn’t Allred-irrific and I was seriously impressed with how well Derington’s work melded with Mike & Laura’s. He’s an artist I wasn’t familiar with prior to Doom Patrol and I really enjoy his work.

Doom Patrol #7 is a wildly entertaining comic in what has been one of the best series in comics since it was relaunched. Way is on fire and you can’t miss with the always-amazin’-Allreds, so go give this one a read right now…you won’t regret it!