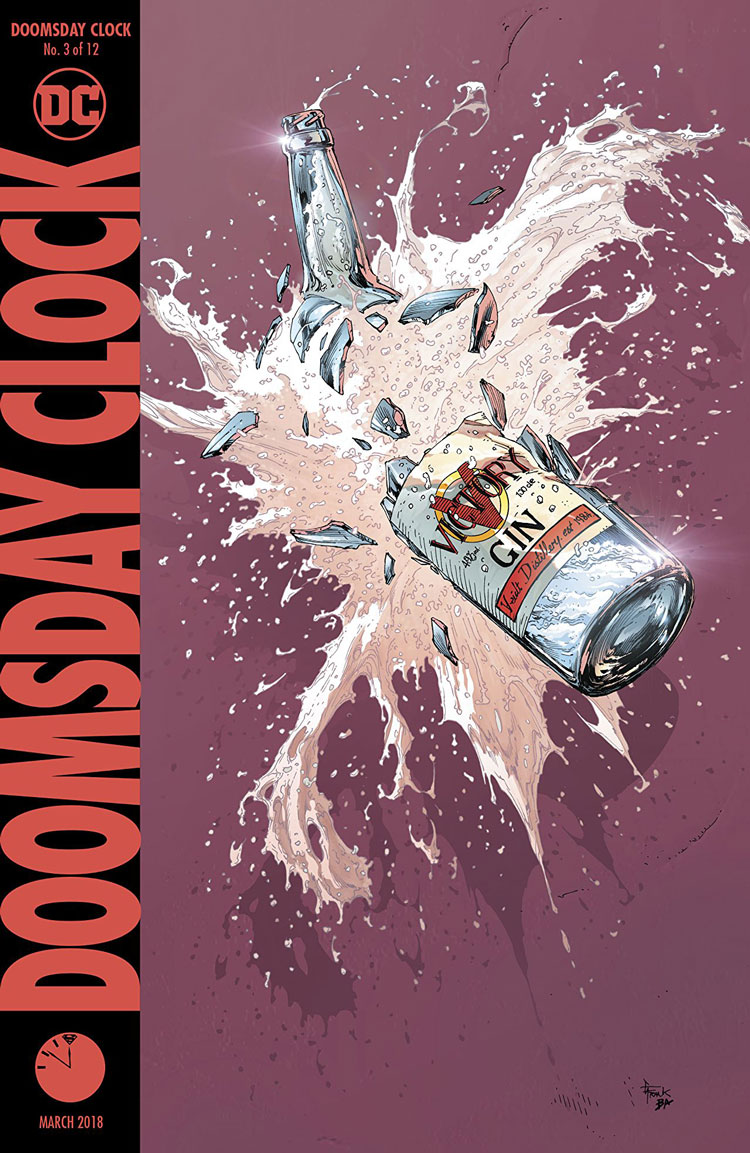 As the countdown towards the inevitable conflict between Superman and Dr. Manhattan marches on, Geoff Johns continues to make revelations in the story even as he layers more and more mystery onto the narrative.

From the use of Marionette and Mime (characters who serve as shadows of Charlton Comics’ Punch and Jewelee) to the subtle references to DC Comics history, Johns is clearly a writer who knows that Watchmen and DC Comics have always had ties, even if those ties were referential only. I am, of course, talking about how Dr. Manhattan served as a shadow of Captain Atom, Rorschach of Question, etc.

Throwing these characters into a singular universe is proving to generate genuine friction at the moment with Veidt having found Lex Luthor and the second Rorschach having entered the Batcave. Unfortunately, much of what could be considered “explosive” reactions to these characters meeting is still a long way off from from happening. Doomsday Clock #3 is still a slow burn which has yet to reveal more than has been hinted at.

Fortunately, Johns gives some tantalizing answers to some key mysteries in this issue that makes the book a worthwhile addition to the narrative even if, hey, Batman doesn’t do as much as you’d think he would considering he’s come across a rather bizarre home invader.

To start, one of the better things Johns brought into the mix was Marionette and Mime. Having been separated from Vedit and the new Rorschach, they explore their new surroundings with ominous results. Their journey takes them into a bar whose occupants take particular dislike to the way in which the two are dressed, an occurrence which might, to some, seem haphazard, but to those with a watchful eye? Yea.

This is all part of Johns drip-drip-dripping obvious clues about ‘why’ these two characters matter. As far as this author is concerned, pay close attention to a bottle of booze which the drink from. Considering who these characters are and who they decide to search for? Yea. It’ll drive some fans nuts, and that is part of the fun. As the search for Marionette and Mime’s child comes closer to its conclusion, pitting together the pieces serves as part of the fun.

The art used when Marionette and Mime encounter some trouble in the bar, work by the fantastic duo of Frank and Anderson, is standout stuff. Mime’s body is presented as dynamic yet rigid in his movements while Marionette is dynamic, wild and nimble. While the stoic expressions on Mime’s face are tough and steely, Marionette displays some of the creepiest faces this side of … well… some of DC’s more notorious clown-themed villains. A particular sequence which transitions through seven panels is particularly chilling. This is both because it ties into something I mentioned earlier in this review that people should keep an eye out for, but also because it’s just damn creepy in the best way possible.

In regards to action, the other key set-piece in this issue is the confrontation/payback-match between Veidt and Blake. This is, weirdly, an almost fan-fiction level of weird, but again, it’s weird in a good way. Johns presents Blake in what appears to be a younger, healthier body and he only wants one thing. The action again shows a dynamic between a stronger, more stoic character in Blake and a more nimble, acrobatic character in Veidt. Johns uses the sequence to showcase some unique uses of strong blacks and minimal colors for the conflict, yet unlike with the Marionette and Mime material, this sequence is lacking.

Luthor, a charater who would be a fascinating third player in this sequence, is removed from the story through obvious means. It is a pity, but Johns quickly finds a way for Veidt to find his own way out a window and thus for the story to keep moving. With a story as big as what Johns is building, that is probably for the best, even if there are few answers. What is shown, i.e. how Blake got to the DC Universe, is hinted more than it’s explain, but what is present is good enough for now.

Finally, there is the new Rorschach and Batman. Unfortunately, this section of the story, which could have been the strongest, is probably the weakest. While we have a reveal as to what the inheritor of Kovacs’ mantle looks like, there are little answers provided. Well, in a way. One popular suspect is instantly ruled out, but a second one is still in the running.

Still, much of Bruce and the second Rorschach’s meeting is conversation, and almost none of it comes from Bruce. The eventual purpose of their exchange is more mystery, with the narrative taking an ironic yet problematic turn. Here is where Johns stalling some of the more unique narrative potential is an issue since, hey, why introduce these characters only to separate them in the manner that was done? To get Rorschach there?

There is so much more to this comics than I can really dig into, some of which constitutes a big part of the comic. From Johnny Thunder in his retirement and that tie-in to the Justice Society to the mysteries behind the “Superman Theory,” this comic is littered with references to bigger events within the DC Universe. For history buffs of golden-age film, check out the back-matter for an interesting cross-over into film history which makes use of real Hollywood personas such as Hedda Hopper and Jacques Tourneur.

Also, a question for Geoff Johns and/or anyone else: is the older gentleman in Thunder’s retirement home reading the 2003 semi-autobiographical novel The Fortress of Solitude by Jonathan Lethem?

Doomsday Clock #3 is a good book, but if it can or cannot be considered a great one is going to hinge on how the mysteries presented within its pages unfold throughout the whole, complete story.