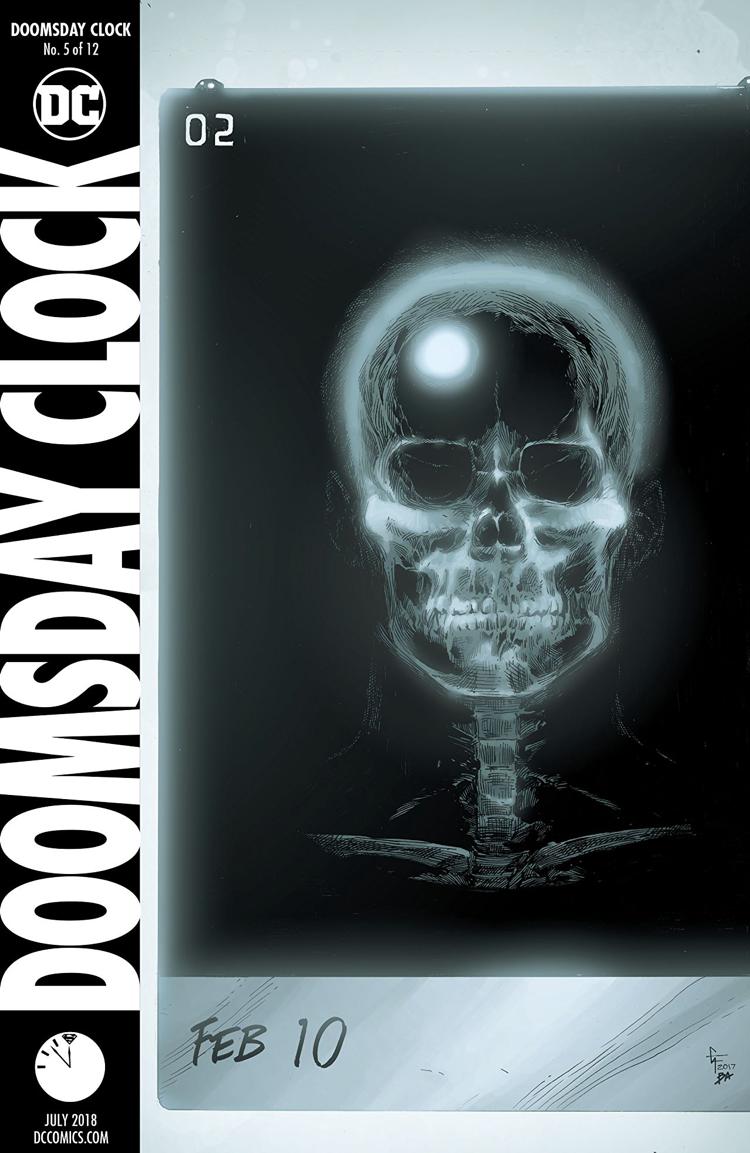 It’s all beginning to come together. Characters are meeting, storylines are converging and progressing, and the Doomsday Clock continues to tick with ample surprises and reveals along the way.

Issue Five of the series about the Watchmen colliding with the DC Universe gets more complicated as several players make moves of their own and the DC Universe of 2019 is revealed even more so as Johns expands on several stories throughout. Picking up with Ozymandias recovering after his run-in with The Comedian and Lex Luthor, the nine-grid paneling is always at work with what the specific panel going alongside the dialogue to maximize what’s going on the page. This section with Ozy establishes his newfound predicament and Frank is incredibly detailed with what’s displayed across the grid with the bottom three showing an incapacitated Ozy and word balloons revealing comments and events surrounding the world. Frank inches each panel towards the next one in a step-by-step manner that marches you to the whatever comes next, letting you see everything you need to know. From the panels either surrounding or expanding outward to get the full scope, the colors from Anderson are pitch perfect in the light and darkness of the hospital. Frank varies in perspectives and angles on a panel by panel basis and the range and compact spacing for the panels leaves a lot of room for how the characters come across with Anderson’s inking adding to the darker scenes when need be.

Johns continues to build up a familiar yet, growingly political DC Universe that doesn’t dwell on the growing happenings but is simply a part of the universe now. One or two panels featuring prominent characters and some dialogue spread throughout panels continue to peek interest surrounding Metahumans and the hits continue to grow as we catch up with more classical and unfamiliar DC characters and their roles in this strange new world that has Metahumans at the forefront of some dire news that creates an air of mysticism and danger around the DC Universe that is only one year ahead of where we’re at now. Johns goes back and forth with larger events on the news in relation to other characters and the other mysteries that have been established in Doomsday Clock. The cast in this issue is increasingly large, with who Johns writes and who Frank gets to pencil and there is a lot to go over with the characters that appear. Frank includes details in the backgrounds of the panels that make this issue a dedicated look at the world as it bounces around between several parties all making strides in some surprising directions.

Frank and Anderson capture the normalcy and fantastical of the DC Universe and the character journeys across the book. Johnny Thunder is on a one-man mission to get back his friends and glory days and the sadness and isolation are well embedded in his journey with how Frank portrays the 102-year-old with Anderson’s colors being dipped into inking and the shadows along the way. Going across different plotlines and events leave some characters in places that you have to go along with because of the urgency but that some plotlines take in the back half of the book.

Johns handles the ongoing Metahuman debacle with a lot of conflicting sides and voices giving their own views on “The Superman Theory” and the role that Metahumans now find themselves in. The conflict has escalated across several locations around the world and the panels showcasing the different stances and who stands on which side makes the back matter of the issue all the more tantalizing and exciting. Part of the appeal from the get-go with Doomsday Clock was the characters of the Watchmen Universe interacting with the DC Comics characters and Johns makes good on these interactions in this issue. The writing between two of these characters is exactly how you’d expect it to play out, with both of their ways of life clashing because of the differences in their universes. The Watchmen Universe was always more realistic when it comes to the way they look at the good, evil, and the greater good and the conversation the two have show the fundamental differences on where they stand with superheroics wholeheartedly.

Doomsday Clock #5 is a top-notch balancing act of stories and material that populates the sole book that propelled us into the very near future of the DC Universe. This book is filled to the brim with various conflicts and issues that make the universe we read every Wednesday both familiar and unfamiliar given the state of things. Johns, Frank, Anderson, and Leigh all work in unison to provide a very well-executed book filled with multiple layers of its characters, story, and going off the beaten path of where we expect the story to go. Doomsday Clock is basically about the Watchmen and DC characters colliding but it’s also a continuation of the road to a darker, more rampant DC Universe that may be more in league with what the Watchmen characters left behind. With issue five, we made steady progress on multiple fronts with events rising to the occasion or leaving us with exciting developments for the next issue and the art team of Frank, Anderson, and Leigh make everything look visually spectacular and the issue is more often than not just people talking! Doomsday Clock #5 is an example of an issue that makes this limited series worth the wait.