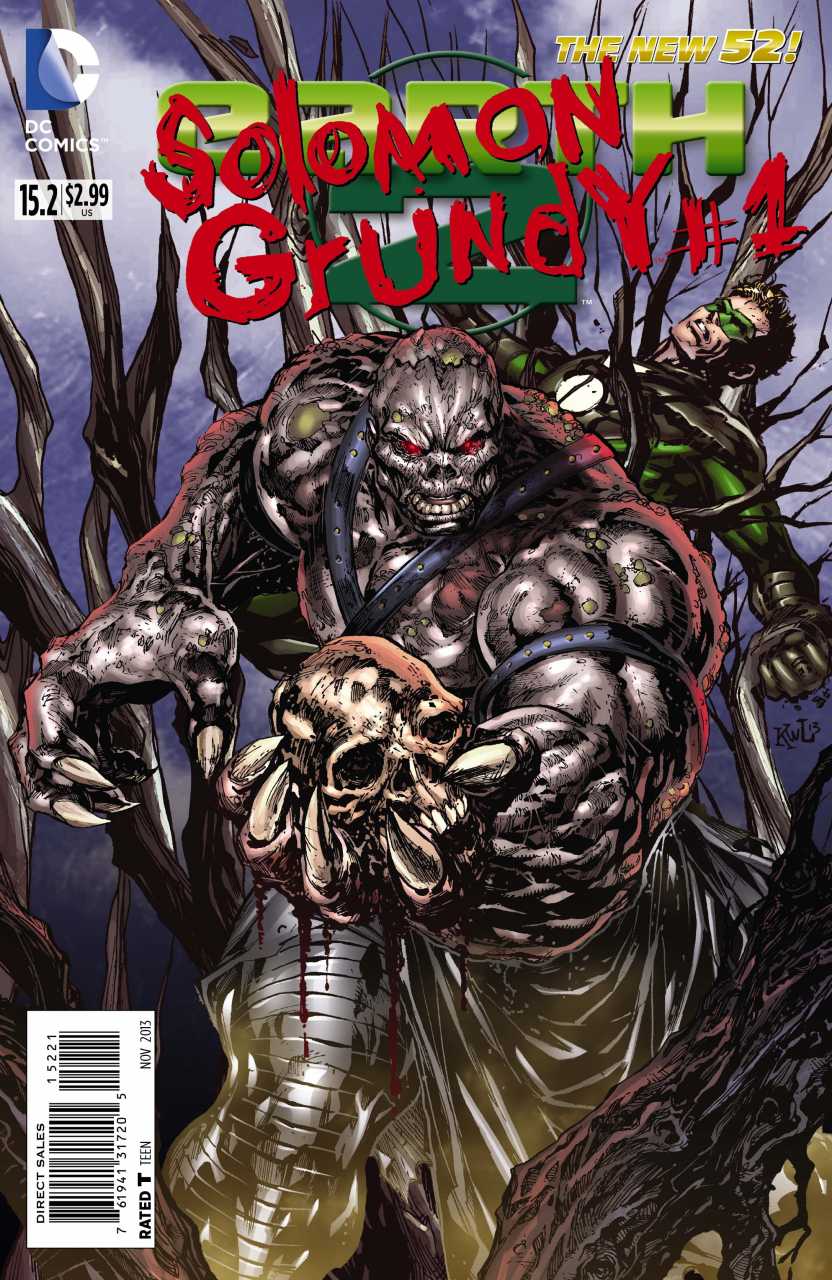 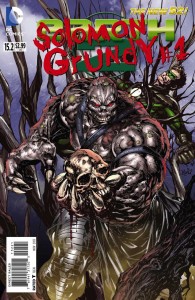 Solomon Grundy. Born on a Monday. Christened on Tuesday. Married on Wednesday. Took ill on Thursday. Grew worse on Friday. Died on Saturday. Buried on Sunday. That was the end of Solomon Grundy.

I’ve got to start by saying any book with the name Earth 2 in the title has a lot to live up to. James Robinson and Nicola Scott have crafted a world in such detail that every character and setting feels substantial and complex. So, going in, I expected a different flavor or pacing, particularly since these Villains Month titles are meant to be the elusive done-in-one that comic fans say they want (but don’t really, as it often turns out). What I didn’t expect was a story that ended up being… well, empty.

Matt Kindt had a decent reference in Earth 2 #4-6 for Solomon Grundy’s speech patterns, motivations and relationship to the earth, and also had the opportunity to craft a completely fresh character in Solomon’s original template human. In the final product, however, neither version of Grundy seems to have any depth or sense of individuality. The modern day avatar of the Rot has been reduced to a mindless monster, a far cry from where we left him in his final confrontation with the Green Lantern Alan Scott, and newly naked for reasons to which we’re not privy. His previous garb came out of the ground with him, so there doesn’t seem to be much of a reason for it to burn away, or at the least, for him to wear a Native American blanket as a loin cloth instead of generating new garb himself. And original Solomon fares not much better. A one-dimensional character who kills… um, everyone… for some reason after the latest instance of his boss raping his wife, and then himself, leaving a crying baby — for whom we get no resolution or further reference. And all he can utter is the nursery rhyme above. It rings hollow, and this Grundy — the New 52 Solomon Grundy — is done a disservice for the lack.

Aaron Lopresti starts off the issue beautifully, really capturing the sense of wonder that usually permeates Earth 2 and its inhabitants, but I don’t ultimately think the book was geared to his strengths.  His Grundy has not of the grit or grime of Scott’s, or Ken Lashley’s gorgeously grotesque cover version, which is a pretty exceptional rendering of what the greatest agent of the Rot should look like. Lopresti’s flashback scenes in 1898 seem rushed, with detail barely roughed in and backgrounds falling away in multiple panels both there and in fight scenes that seem to go on too long.

With little more plot to fill twenty pages than the nursery rhyme that inspired the lead character, Earth 2 #15.2: Solomon Grundy falls short of giving us an interesting tale for an already interesting character. If anything, it seems to unravel a bit of what made this version of the character so unique, and that regrettably seems counterintuitive to the mission of this month of one-shots.