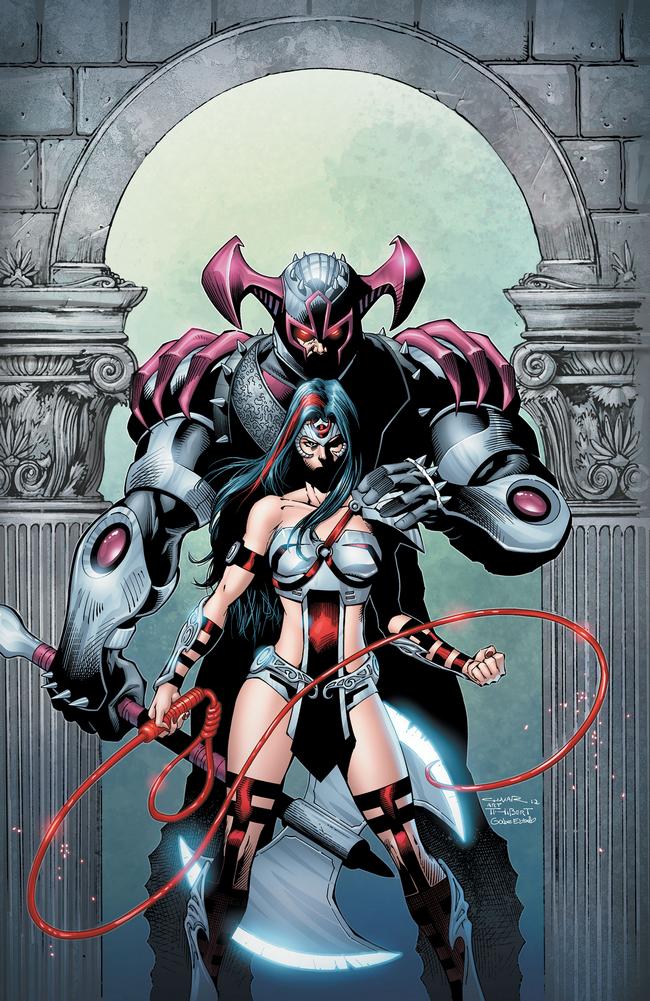 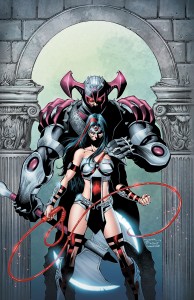 It’s time to catch up with the forces of Apokolips that sought and failed to devour the alternate world of Earth 2, and there’s a new addition to the madness. At the side of the dreaded Steppenwolf comes the warrior known as Fury! Will she be every bit the mad genius of war her seeming mentor was, or will her earthbound origins betray her master? And just what kind of nation or king would willingly give comfort to the most hunted man in the world? This interlude only begins to answer these questions and more!

Robinson has definitely captured my attention with the introduction of a fresh new female protagonist who, on the face of it, is a sharp amalgamation of quite a few popular pre-New 52 DC Universe characters. Of course, long time fans know that the name “Fury” was held most famously by the daughter of the Golden Age Wonder Woman, and, as a result, some revelations in this narrative will come to little surprise. But the true treat of this new character is how much she owes in appearance and backstory to a number of other powerful female characters. Much like the Atom before her, Fury’s character strength really comes from Robinson choosing ever so carefully from the best of what has come before, without being afraid to take radical turns from established history. Shades of Big Barda and most certainly Lashina (my favorite of Jack Kirby’s Female Furies of Apokolips) are cast on Fury most heavily, leading me to wonder just how she will inevitably become one with the side of angels (as both those characters eventually did) and join the other new Wonders of Earth 2. It certainly would seem to be an uphill battle, leaving me all the more excited and intrigued. I adore seeing the world at large be more fully developed — as details on the country of Dherain slowly unravel — but I admit I missed seeing other aspects of the planet and its wonders in this particular installment, for the sake of evolving a single plotline.

Cinar’s interior art unfortunately fails to hold my attention to the degree that the work of both permanent artist Nicola Scott and Cinar’s own work last issue do. Perhaps it’s the ink change from Trevor Scott to Winn and José, but I found the pencils much less precise and eloquent than I have come to expect from Earth 2. Backgrounds are frequently left blank, faces illustrated with far less detail (even pupils seem to drop from drawn eyes about midway through the story), and expressions more generic on all characters at one time or another. Action is definitely dynamic, with Fury’s battle scene in particular a great stand-out, but the care for elaborative work seems to be missing. For an issue weighted with talking heads and political posturing, the art leaves me with the gut feeling that this story is merely fill-in, a forgettable effort, when I suspect its plot points will have ramifications for months (maybe years) to come.

While much about Fury and Steppenwolf’s roles in this strange alternate world’s order is still unknown — even after devoting the entirety of a single issue to them— my hope is that this is merely prelude to a significant part to play in the near future. I’m not sure I can stand to wait too long before getting more information on this mysterious new woman Wonder, or see her mentor’s rule get more fully developed. Like every other sharp turn Earth 2 takes, or Easter egg eagerly uncovered, the mystery of Fury (and the return of the full original creative team) has me counting the days to #9.