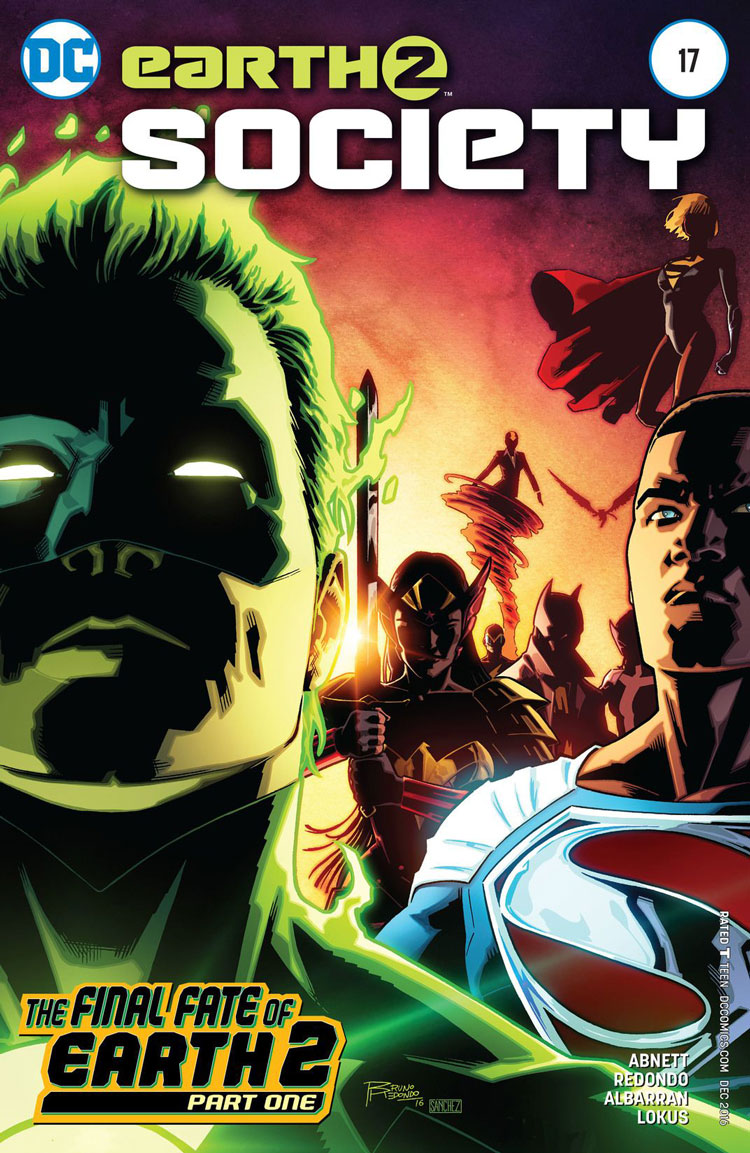 I’ll admit. I’ve been keeping tabs on the downward spiral Earth 2 has taken in the DC Universe since that last triumphant moment at the end of Tom Taylor and Nicola Scott’s run in Earth 2 #26.

And to be truthful, it hasn’t even been as alluring as watching a carwreck or as entertaining as seeing a presidential campaign go down in flames. Quite frankly, it’s just been flat out depressing.

With Earth 2: Society #17, it looks very much like we’re turning a corner. In part one of a story entitled, “The Final Fate of Earth 2,” readers are re-introduced to a few of the heroes of what would be the Justice Society in a total void. Not even just a narrative void. Literally a blank void, inhabited by an ingeniously creepy version of an old friend (kudos to Abnett on that, as well). Their world is reforming itself in the wake of whatever happened last issue that, honestly, I don’t even care about.

What I do care about is getting to instantly see that these heroes — Red Tornado, Power Girl, Hawkgirl, Fury, the Flash — are REAL people under their masks. They are confused, hurt, have feelings about each other. This is what this book (and its predecessor) has been missing: character. It only took destroying a world to get to it.

And truly, maybe that is what it took for writer Abnett to get to a point where he could extricate these honestly wonderful characters from the creative morass they’ve been subjected to throughout World’s End and Convergence. Maybe it took a Rebirth line to divorce itself from this title to give it the room it needed to start over.

Whatever the case may be, let me tell you: I am pumped. And for more than one reason.

With the addition of Bruno Redondo as regular ongoing artist, the sense of this title as centered on character is amplified 100-fold. Redondo is easily the natural inheritor to the likes of Kevin Maguire and Adam Hughes with his clean, weighty style. Facial expressions and body language are top notch, conveying so much about the story Abnett is beginning without having to rely on backgrounds and environment.

Redondo, of course, was one of the key contributors to former Earth 2 writer Tom Taylor’s brilliant run on Injustice: Gods Among Us, giving the book’s heady and somewhat disturbing plot a grounding in real character and personality. If he can do the same for Earth 2 in its time of need, it wouldn’t be a moment too soon.

It’s clear Redondo gets what needs to come out in this cast of characters. It’s clear Abnett can build out these relationships with the care and characterization they deserve. The only question remains is whether this time is for real. Can we keep an Earth 2 that isn’t just one world war after another and honestly focuses on the WONDER of this society of heroes?

I don’t know, but given the success linewide DC has been experiencing, and the results of this first issue — I’m eager to find out. Welcome back to my pull list, Earth 2. I missed you. A LOT.