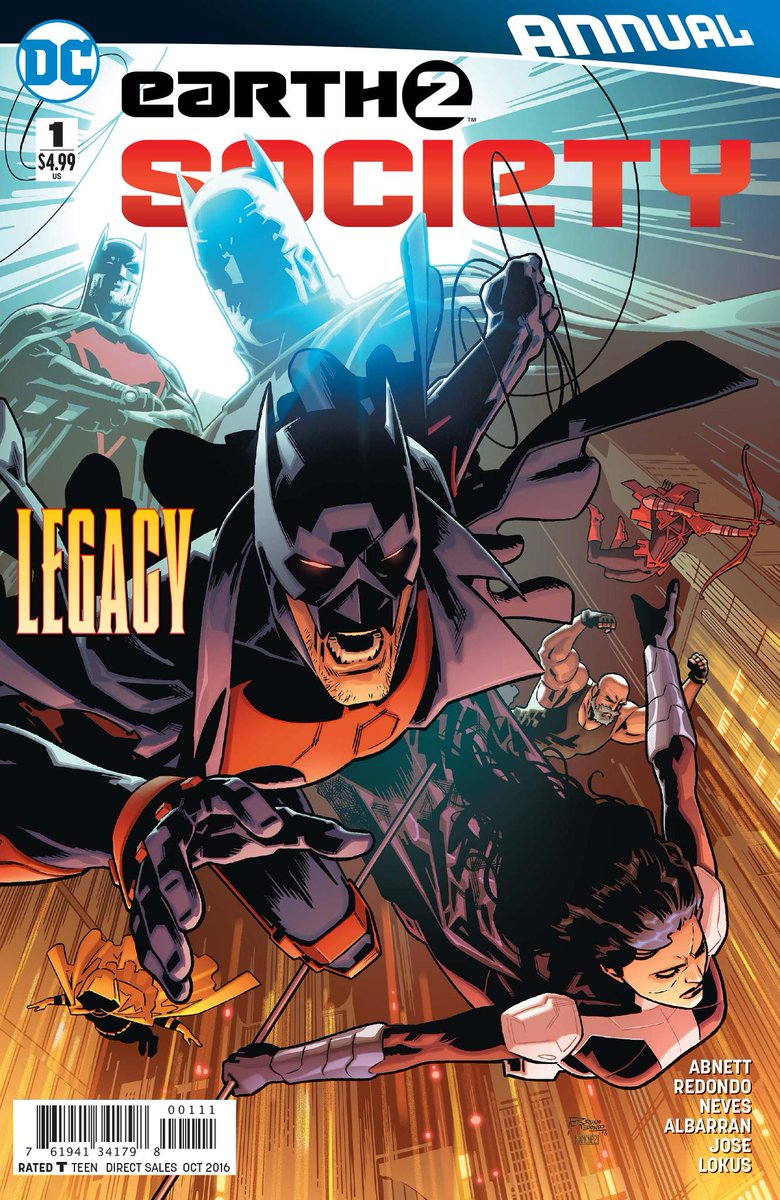 In the five years Earth 2 has been around, the path to peace and prosperity has been rough. There was the death of the Trinity that opened the first issue, an entire war fought and lost against the forces of Apokolips, and the renewal of their planet thanks to the aftermath of Convergence.

Now, in this packed annual that adds depth and growth to some not so super-powered Wonders, and inches the current Earth 2 arc to its conclusion, we ask the question of “What should the ideal Batman be for the legacy of the mantle to thrive?”

In the main title, the race against time between the Wonders and the Ultra-Humanite Army of Orphans to claim a device that could very well change the nature of their Planet reaches a boiling point, with most healing after attacks on numerous fronts. Dick Grayson isn’t in the best shape but one thing keeps going, the revelation that his son John is living and breathing… just on the side of the Ultra-Humanite. The issue focuses on two connected stories serving as character spotlights for Dick and Helena Wayne aka Huntress.

Dick recounts the legacy aspect of the Batman mantle and those affected by it. Unlike his predecessors Bruce and Thomas Wayne, he comes from a mundane life and was only recently thrust into this role during World’s End and Convergence. It’s a conundrum we witnessed play out over the course of the Batman Arc “Superheavy” where the person behind the mask has self doubts on what type of hero they should be? Do they honor who came before wholeheartedly or give the legacy their own spin?

Dick comes out of this annual with a decision and along the way Dan, Bruno Redondo, Juan Albarran, and Rex Lokus chart an emotional backbone to the brave new future for the Earth 2 Batman. We get a sense of where Dick has been as a character and what demons have been haunting him along the way. While the segments featuring Dick and John are just conversation, it all holds weight because these two have come out on two completely different ends. And there’s some trepidation for the father and son going forward, Abnett writes them both showing a wide and range of emotions as three-dimensional people with their own hopes, fears, and wants. It all blends together as the most relevant plot line for the annual.

The art team for this sequence nails the lighting, shadows, and occasional color pops when the moment strikes. All of the scenes with these two are given a scientific flare yet, grounded in reality.  Redondo, Albarran, and Lokus keep the art and colors consistent with the writing and it shows with the moments of empathy and quiet between the father and son. You feel the sadness and disappointment behind Dick’s eyes as he explains he doesn’t compare to who came before him as far as being Batman is concerned.

As far as the other half of the issue? THIS is where the annual packs several punches to the face!

We’re thrown back hours before Dick’s crisis of (Bat?) faith where Huntress is tasked with getting John to Dick in the first place, only thing in their way? One of Ultra-Humanite’s Special Officers, Grief. If the segments with Dick questioning himself about the mantle are any indication… the action-packed battle between Huntress and Grief prove you don’t need to live up to any previous history and stick to your guns because she owns the spotlight despite not saying much.

The action is fluid, clean, and right at home with the art that Jorge Jimenez has accustomed readers too with the main Earth 2: Society title. The fight is the more vibrant colored part of the annual thanks to Diogenes Neves and Ruy Jose, and Lokus as the colorist as well. Huntress moves quickly and efficiently with all of her purple armored glory and proves why she has a spot as a Wonder on Earth 2. Both segments look stunning and everything is kept tightly color wise, the annual never falters when it comes to character looks and everything clicks to a resounding win for our heroes.

All in all, the first annual for Earth 2: Society succeeds in both bringing us closer to the end of the arc without taking away or halting what the main title has given us thus far. You can’t go wrong with Dan taking the time to “smell the roses” with some of the actually normal Wonders and displaying why these guys deserve to be here. While Earth 2: Society hasn’t felt the touch of DC Rebirth quite just yet, here’s nothing wrong with recognizing the past legacies while looking towards a new future all your own.