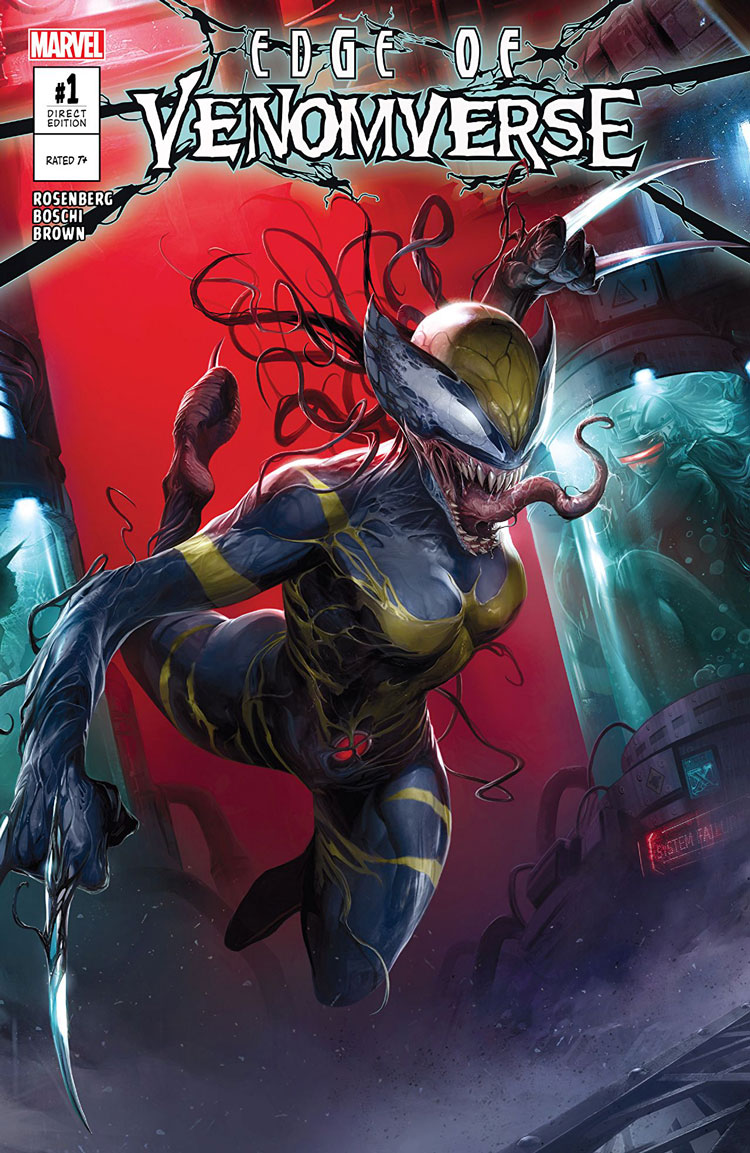 If any particular element of the Venom character as endured beyond the host character of Eddie Brock and the alien suit’s ties with Spider-Man, it is probably the fascination everyone has had for decades with putting other characters into the suit. For this reviewer, many friends in high school who drew characters like Venom or Carnage would also draw ‘venomized’ versions of other characters, even non-Marvel ones.

Rosenberg’s foray into the Venomverse has a relatively easy to understand premise: introduce a character from an universe where they were the recipient of the Venom symbiote.  Wolverine/Laura Kinney serves as one of the perfect models for how to introduce an idea like this since her time in government captivity also suits the symbiote. Why wouldn’t a black site with a female clone of Wolverine also have a symbiote? The pairing succeeds and Rosenberg does an amusing re-exploration of the 2001 NYX, albeit with more symbiotes.

The biggest strength of the story is actually how well Laura’s origin and motivations can be summed up in a single issue. The first few panels show Laura on her latest escape attempt from those who have had her imprisoned, as well as some brief narration to explain this isn’t Laura’s first rodeo. She has tried to escape multiple times, but then comes the almost “What If …?” comic twist. In her attempt to escape he breaks a symbiote sample loose from containment and then becomes merged with the alien suit.

If there is any problem with the opening it is simple one panel where Laura’s claw breaks the glass that allows the symbiote to be free. In one panel Laura’s hand is gentle set against the glass pane separating her from the symbiote and in the next panel she is clenching a fist with her claw out slicing through the glass. At first I thought she was freeing the symbiote, but the third panel she is clearly surprised by something coming out after her.

The remainder of the comic is a re-exploration of NYX. Laura comes across Kaiden, Tatiana, Bobby and Lil’Bro while being homeless and alone in NYC. The main thrust of the action in the comic comes from watching how Laura and her friends evolve alongside the symbiote together, although this isn’t clearly shown one way or the other if it is something detrimental to her friends. They seem to work well with sharing Laura’s symbiote to gain access to weaponized hands and jaws, but it isn’t clear if they have the same bond Laura and her symbiote does.

Part of what is interesting about Edge of Venomverse is Boschi’s pencils and the ink/color team-up of Gorham and Brown. The world of the Venomverse for Laura is not a pleasant one and the adventures of a homeless venom-infused group of homeless kids can easy get away with being dark. The scratchy, sharp edges of Boschi’s art work well to shape the frames of Laura’s friends while the colors and inks, which appear spotty and scratched in some respects, gives the characters and NYC a worn, dirty feel. Gorham and Brown also pair well for shadows, one of the strongest elements of the comic. Panels are infused with shadows and grain, a sort of smeared and used tone that makes Laura’s NYC hang-out feel effectively old, or the Facility lab dangerous.

Regardless of if you’re a fan of All-New Wolverine or just NYX, Edge of the Venomverse #1 is a functional little comic that encapsulates Laura’s origin with a neat twist while also setting up ‘who’ this version of Laura is going to be in the up-coming multiverse battle on the horizon of the Marvel universe.