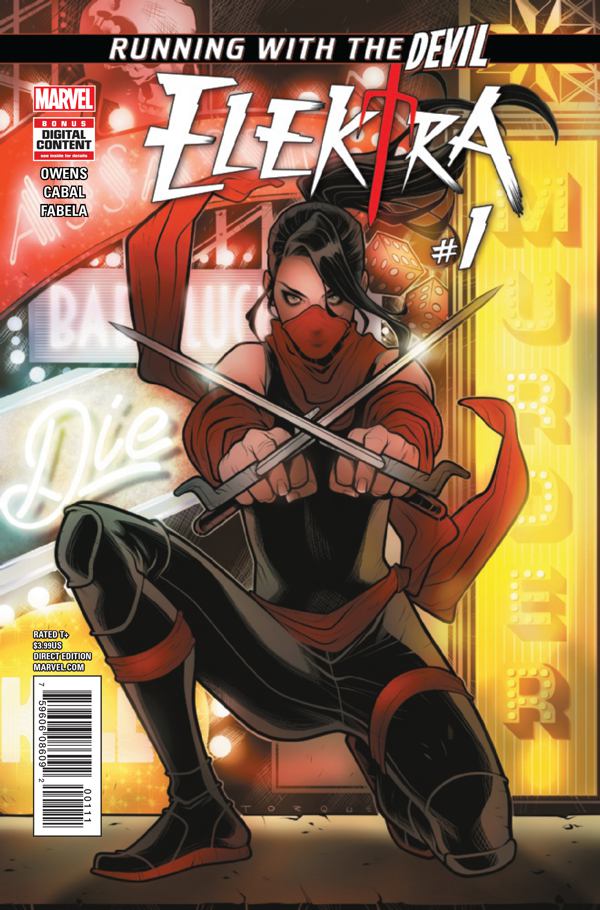 Red is always her color.

Elektra likes hiding in plain sight, and she’s willing to chill at a casino to avoid her usual schtick. Yet, she comes to the aid of a bartender who’s at the mercy of her employers, taking care of business and catching the attention of someone who is dangerous, but is likely to underestimate her skills and prowess.

I have mixed feelings about Elektra for a few reasons. For one, the premise seems odd considering her background within the Marvel universe. This first issue almost felt inconsequential. There are moments which touch on her skills and her brazen nature, but other than that it almost feels as though she could be any other character versed in espionage. The story didn’t seem to touch on what makes Elektra Elektra, why she’s doing what she’s doing, and the setup doesn’t give the indication that such a revelation will happen. I wanted more substance than for her to be thrown in a villain’s scheme by happenstance, and I feel much more could have been done with her.

Matt Owens writes an interesting Elektra, who is not always one for words and knows how to move silently when she wants to. My contention is with the setting and the plot. As an everyday hero who has no qualms with death, I find the protagonist interesting already. Her willingness to help Lauren was a nice touch, though what I hope is that, especially with a woman as the headliner for the series, more women are introduced beyond the limited dichotomy of abused and empowered.

This launching issue isn’t heavy on words, which allows the visuals to tell the story. Juann Cabal sets up excellent shots through many of the panels, taking “show, don’t tell” to heart. I like the scenes interspersed with activity and environment because they play on the enigma that is Elektra herself. There’s so much more to the story besides what’s up front, and I feel the art excels at this effect. Antonio Fabela and Marcio Menyz use startlingly clean colors. Everything feels pristine, somewhat like Elektra’s own presence in the story. Through their work, Fabela and Menyz employ hues that give each image a clarity which is a statement in itself, but that also allows different layers of the overall narrative to emerge.

Some stuff works, some doesn’t in Elektra #1. I hope it survives, but the next issues are going to have to pick up for that to happen. Elektra’s characterization is cool, just the setting she is immersed in feels like an odd choice, especially considering the shaky foundation that exists under a comic’s survival. I think there’s promise, but this is a rather odd start for what is honestly a risky series, even if Elektra herself is really cool.