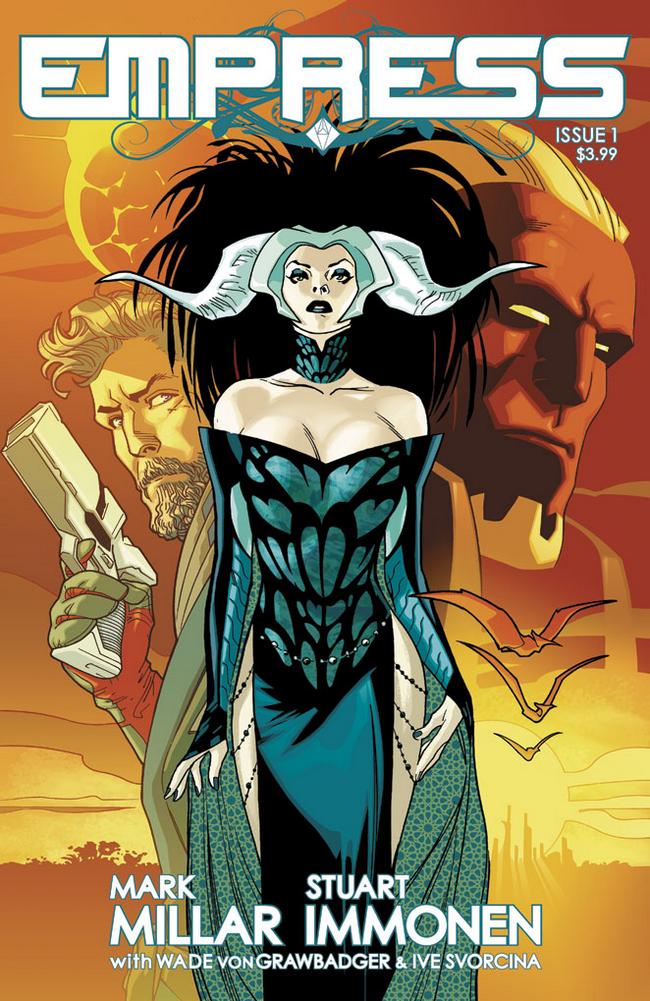 Stuart Immonen brings his skills of illustrating dog fights in space (Star Wars,) to a spectacle of family drama. Empress is the straightforward story of a woman who has had enough of her dangerous husband’s ways. Now she is taking drastic measures to seek safety for her family. She may be a queen, but that does not mean she has power. What sets this comic apart is the creative team’s take on this almost fairy tale like story.

Millar has constructed a universe that is technically at home in reality. That’s because this regal land of science fiction takes place on Earth. It’s not Earth of the future, but millions of years in the past. The initial pages tempt you to think with the furthest reaches of your imagination. It asks you to think of a time period so far gone, that it would be impossible today for remnants or clues of it’s existence to be found in modern times. Despite the scientific arguments that could be made about this fictional work, it allows the mind to wander. It also allows the reader’s heart to create an emotional connection. Had the story taken place, in another far off fictional planet, the desire to feel connected to the characters would not be as strong.

The familiar story and loose connection to an Earth of the past help to create a strong structure. The stellar art magnifies the world building. Svorcina’s color work lavishly layers blocking and gradients to create depth on every page. Von Grawbadger is careful to not ink in or block out every shape on the characters, so that Svorcina can add such dimensions. It is disappointing that the only skin tones visible in the story seem to be white or alien-like in color (reds, greens, etc.) Panel work along with massively detailed explosions and ship movements drive the pacing. Readers can feel caught up once the “great escape,” from the clutches of the despot-ruler, gets underway. It would be nice if there was more of a color or style distinction to showcase flashbacks and exposition. If it were not for letter Peter Doherty and his well placed time stamps, the art would not have provided any clues in a scene or time change.

The simplicity of story and the excitement of the action are delightfully boundless. The ending leaves the door open for a world of possibilities. We are left with only the faintest hints of what lies ahead. Empress begins as an ancient fairy tale and ascends into a massive space opera.