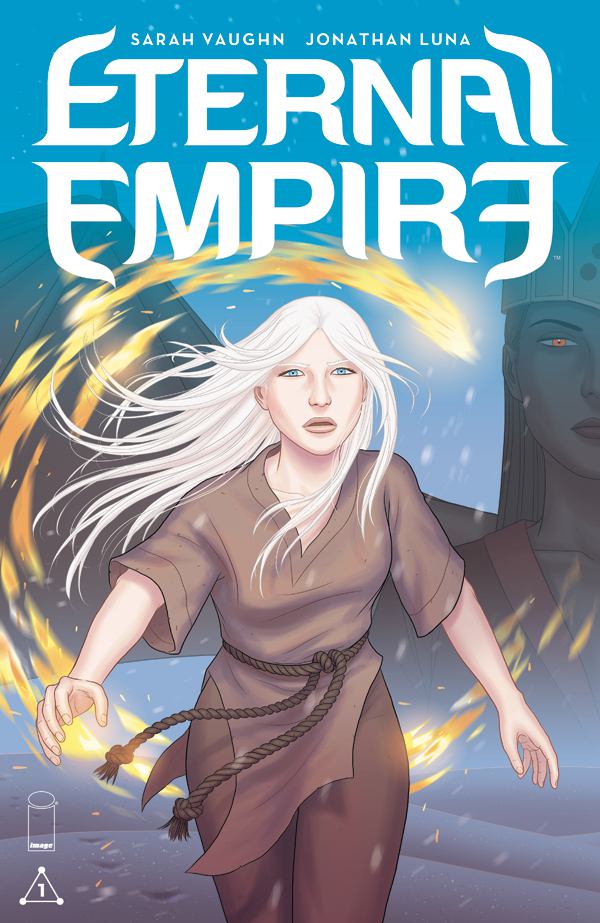 “Into the land, crimson doth flood…The Suns align to call for three. New blood rises to conquer old blood…and set all suffering nations free.” In a far off land, one hundred and forty one years ago, a woman did a horrifying deed out of desperation and loss of hope. Now, another woman lives in the world the other has shaped, a world still ravaged by a war from that older time in this first issue of Eternal Empire.

Vaughn and Luna have developed a dark world, filled with an empty sense of victory and a loss that encapsulates the lives of those who live in the world. They set the tone of this comic in the first few pages and it is a dower one. While I wish there is more explanation about the world the characters live in, having too little exposition is always better than having too much exposition.

The most interesting part of the series so far is probably “White Hair”’s connection to a character revealed at the very end of the issue. She’s definitely different, and the visions she has throughout the first issue bring her to this being. I’m intrigued by who she discovered and I wonder how the two of them are connected.

Luna creates a world of desolation. His art brings forth how brainwashed most of the population is to the Empire they live under. His work shows terrible conditions for the poorest of the citizens, a labor camp devoted solely to feeding the Empire’s distant armies. The place where the farm is located is an interesting choice, and since it is definitely another planet somewhere far off, the climate for agriculture can definitely be in the disparate conditions Luna places the farmers.

The garb of the Empire officials is probably the most interesting. It feels as if the Empire is more of a cult than a place that cares for its people, and the robed men with the Three Suns of the Empire on their white attire really cement that idea. “White Hair”’s evolution as she transitions from the labor camp she is from to where her visions are taking her is interesting to watch as well. It’s a nice segway to her fateful meeting at the end of the comic.

Eternal Empire is a good comic so far. It hasn’t exactly captured my attention, but I could read the next issue. I feel like the twist at the end is enough to make me at least pick up issue #2 to see what it’s all about.