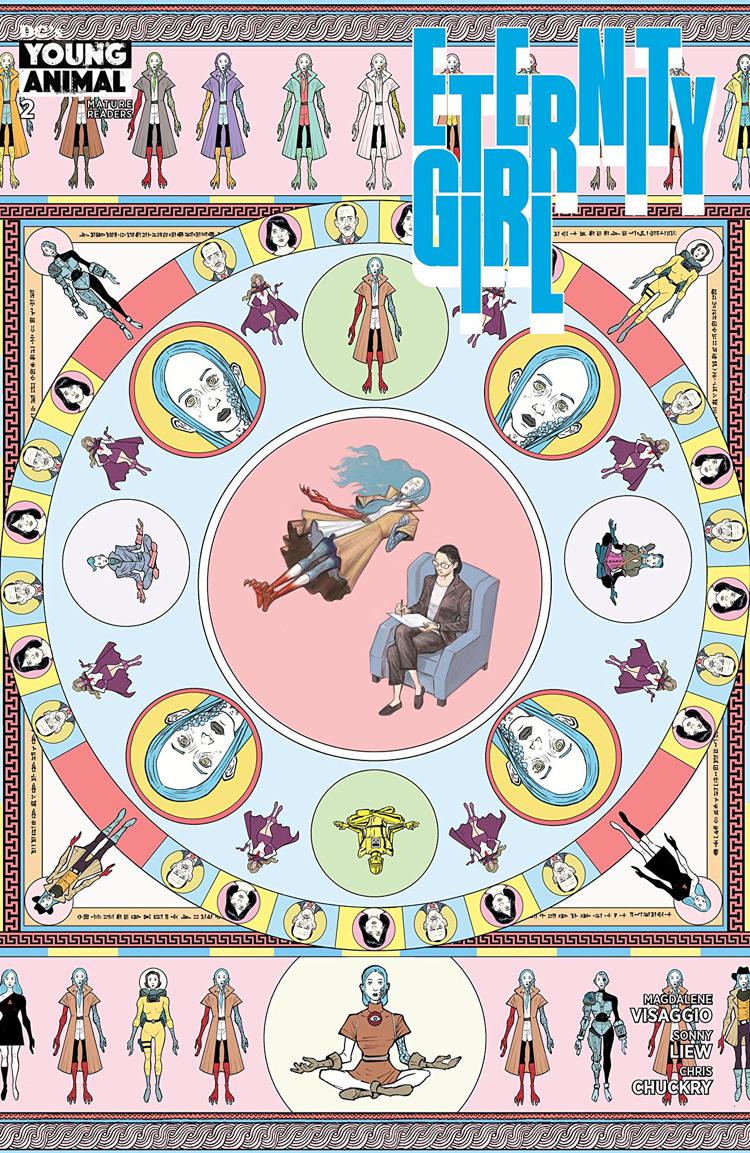 As Caroline’s thin grasp on reality slowly crumbles, what will become of her? Find out in this issue of Eternity Girl!

Visaggio is a fantastic writer. I’ve read her work before in Kim & Kim and Quantum Teens are a Go, but this might by my favorite series by her thus far. I love the meta talk about DC reboots. It’s just really well executed. I love the glimpses of wants and desires, of needing satisfaction from those who did her wrong, of needing sweet release from the loathsome existence of an elemental homunculus. It’s a fascinating dive into the psychosis of this deeply troubled individual suffering from trauma forced upon her due to a seemingly ‘necessary’ sacrifice. I love that her “greatest power is [her] weakness”. That shapeshifting, once her pride, her grand ability, debilitates her with powerful exhaustion and nostalgia filled with regrets over poor choices during war times.

Liew’s work compliments the downwards plunge into irreconcilable madness, depression, and horror that Visaggio’s words paint. The glitching reality of certain panels feels like this infinity shriek into the breaking of reality, these glimpses into what Caroline sees in her head and in the world around, her molding and mixing as well as oil and water. It’s a distressing image of sanity breaking and one’s most negative feelings seeping in and ruining what’s good in one’s life, a more physical formation of the spiraling Caroline is working through at the moment. It is her “splintering mind” trying to shove circles into square holes. It’s great work.

The coloring is perfect. This delve into the retro, especially when Caroline is dragged by her old nemesis into psychedelic bouts of possible hallucinations. The bright acid trip of space would not be as impactful of an image if not for Chuckry’s work.

Read Eternity Girl. Oh my god, read it. Please. It’s so good. The DC’s Young Animal Imprint puts out a lot of very well done, trippy creations but this is by far my favorite and more people should be reading this.