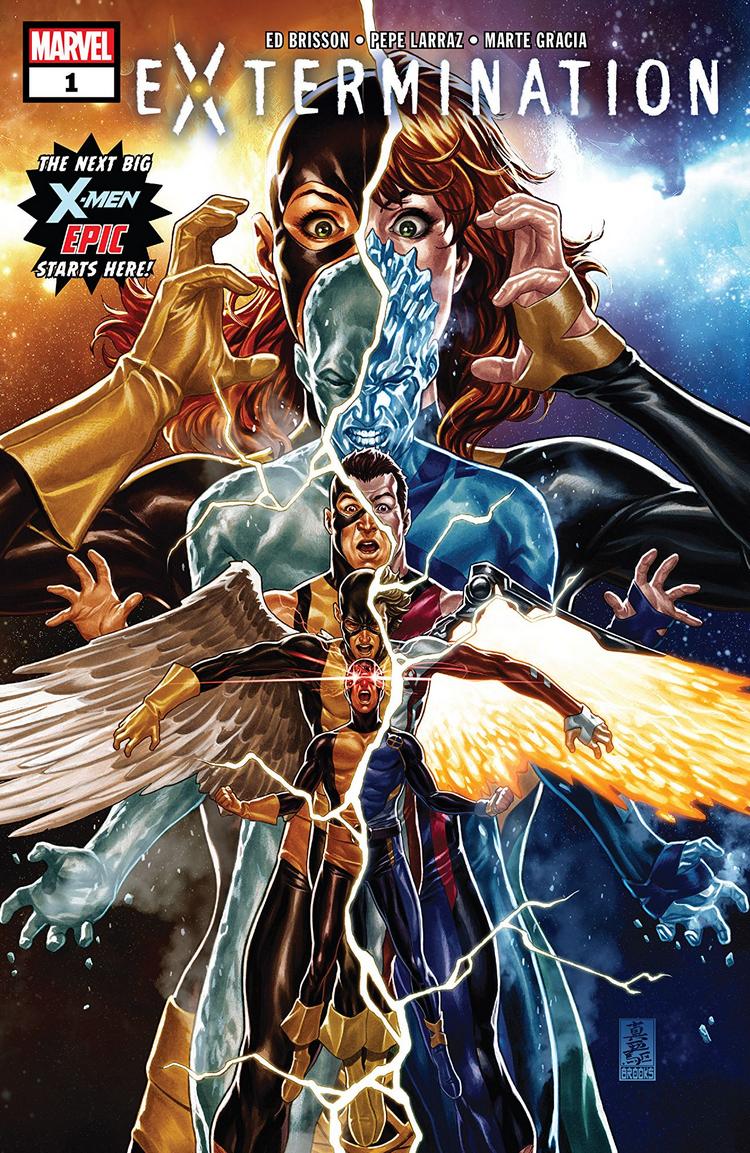 “Mutants are violent, we won’t be silent!”

That’s just one of the masterfully crafted word balloons letterer Joe Sabino drops into the anti-mutant chants of an angry mob. A trope of X-Men comics and particularly mutant-centric comic events, the protest against Homo Superior is used to shift the opening of Extermination #1 from a pre-credits future at a decimated Xavier Institute for Mutant Education and Outreach in Central Park, New York, to the Chicago, Illinois of here and now.

Out of the gate artist Pepe Larraz makes the Marvel Universe his. Following his work on the epic “No Surrender” arc in the Avengers title, Marvel’s Young Gun has, with Extermination #1, drawn more of the Marvel Universe than most artists currently working for Marvel and not named Mike Deodato, Jr. (As a quick aside, a stint with the Guardians of the Galaxy would address that quite effectively).

And it all looks amazing.

Sure, Joe Sabino leads the way into this issue with his on-brand location tag lettering and word balloons that fit the need (not the space available!), but Larraz FILLS the panels of every page of Extermination #1. There are scraps of litter, decorative plants, shattered glass, and iconic characters throughout the issue, each wonderfully crafted onto the page with precision and energy.

And there are thirty pages of it.

The story centers around the time-displaced original five X-Men – Cyclops, Marvel Girl, Iceman, Angel, and Beast – but, honestly, aren’t there more than a few time-displaced X-Men? Yeah. Rachel Grey and Cable appear in the issue as well. So take some X-Men, and some time travel, add in a mysterious foe, and a general sense of unrest about mutants, and you’ve got an X-Men tale that feels epic, but familiar.

In the text page at the back of the book, writer Ed Brisson shares that Extermination “is largely about cleaning house”, which adds to the bloodshed of the issue. The characters whose stories appear to end in this issue get some solid development from Brisson before their apparent demises, but it’s the deaths that bolster the title: Extermination. There’s a definite list of targets, and possibly more than one hunter. The final page reveal of Extermination #1 made me exclaim out loud, and it’s definitely enough for me to already be looking forward to Extermination #2.

Oh yeah, and the Larraz art is pretty spectacular.

Completely matching his visual collaborator, colorist Marte Gracia fills Extermination #1 with amazing colors. Like Larraz’s drawings, Gracia’s hues demand your attention, seize your imagination, and invite you to stay and have a look around. The best part of it all is the true collaboration – when Larraz eases off the detail, or abstains from filling a background, Gracia steps in, completing the visual quite nicely. Between Larraz’s and Gracia’s work, I see plenty of reasons to come back to this issue a time or three before the next chapter.

So is Extermination #1 worth reading? As a pedestrian X-Men reader (I’m in on Tom Taylor’s X-Men Red and have been reading Exiles, Domino, and X-23) I found this issue easy to enter into, rewarding in its premise, and promising in the potential for the rest of the series. The challenge Brisson, Larraz, Gracia, Sabino, and editing crew Chris Robinson, Darren Shan, and Jordan D. White (who has a cameo!) have in front of them is to keep the remainder of this series accessible while continuing to raise the stakes.