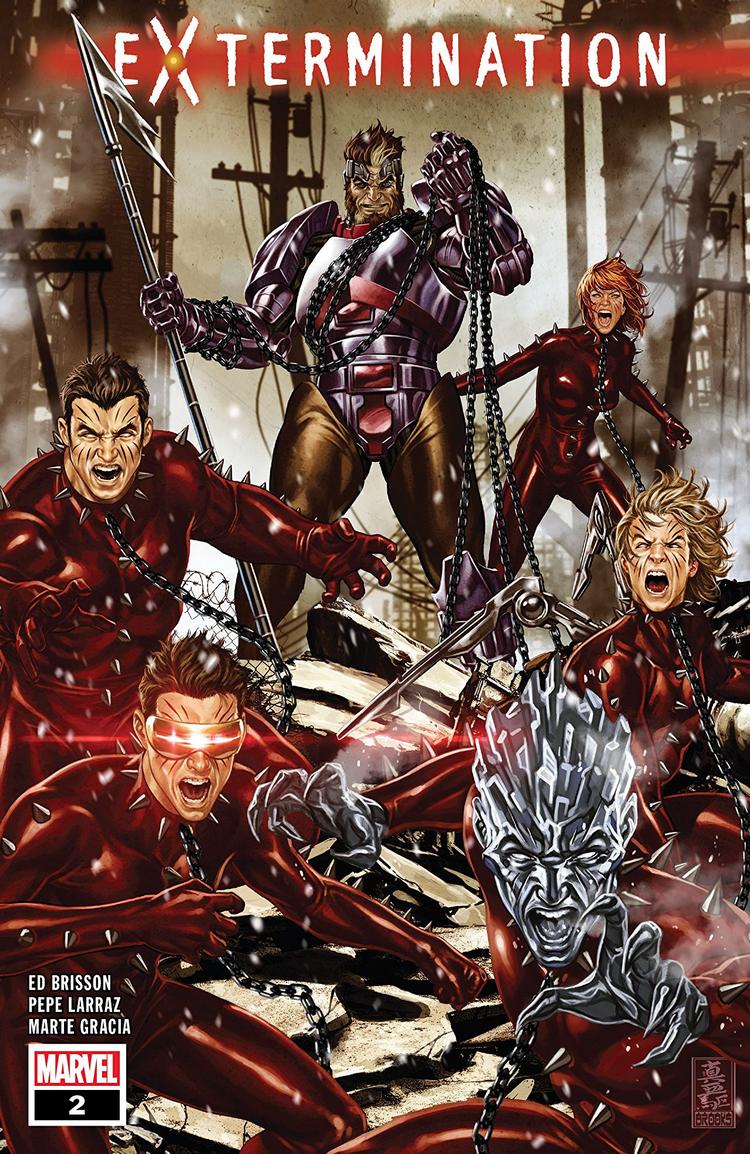 Rachel Summers isn’t talking about the alleged impenetrability of X-Men continuity. Nosir, she’s talking about bringing the fight to Ahab, the future villain who is responsible for at least one X-Man’s death and is certain to return for more. Following the results of Extermination #1, writer Ed Brisson, artist Pepe Larraz, colorist Marte Gracia, and letterer Joe Sabino have set a story with high stakes in motion.

The preview of Extermination #2 involuntarily raised my eyebrows and definitely grabbed my attention. I’m not the most scholarly of X-Fans, but when Calvin Rankin makes an appearance, it scratches the keen obscure character itch quite nicely. The X-Men, to me, have always been fringe players in the Marvel Universe, and the fringe X-Men that much more appealing. That said, Brisson and crew don’t make it obvious if Rankin will have a true role to play or if he simply serves as a red herring or deep cut, but there really isn’t enough real estate in this issue for much more than a tease of Mimic.

Larraz doesn’t work in teases, however, as he fills the panels of Extermination with cool characters, great action, and awesome “sets”. The double-page panel (it covers less than two-thirds of the spread) of the X-Men gathered in Charles Xavier’s one-time office at the Xavier Institute is filled with nuance, characterization, detail, and non-verbal interactions. That single panel would need little expansion in order to fill a “How-To” book, and it would be an amazing book at that – just like Extermination #2.

What would be even better, and perhaps more inline with the X-Men franchise, would be to have Larraz draw an entire set of X-Men trading cards, ala Jim Lee’s 1990s contribution. Larraz makes every character feel iconic and appear awesome.

Larraz doesn’t craft the art in a vacuum, however, as Gracia’s colors bring Glob Herman’s eerie glow to life across the room from present-day Hank McCoy’s thick fur. Gracia has a fun time establishing the temperature of Extermination in the issue’s opening scene by unleashing darn near a full palette in the dairy section of the Passaic, New Jersey grocery store where Rankin is shopping.

Sabino and Brisson know when to throttle back. When they do, Larraz’s art fills the space nicely, and even in the heavier-dialoged panels there is a lot to enjoy. Sabino brings some great sound effects to this comic, and his range of sound effects work nicely throughout the comic.

Quiet moments layered with detail and nuance, filled with incredible characters carved into stunning visuals pace Extermination #2 nicely between the two scraps that advance the plot and raise the stakes of this tale. The more you know and care about the X-Men, the more you’re going to get from this series. Regardless of your depth of knowledge, however, Extermination #2 is brisk adventure filled with a vibrant cast of characters. Some have bigger roles to play, but Brisson doesn’t sacrifice the rest of the cast for the few that carry the most dialog. I’m sure that’s partially due to the fact that Larraz won’t let Brisson discount any character, especially since Larraz has such a solid handle on all of the X-Men.

I know there’s big plans with the X-Men, but right now, I’m soaking this in. Brisson, Larraz, Gracia, and Sabino are giving readers an X-Men epic light on tie-ins, and big on eye-opening moments and gasp-worthy reveals. This ain’t your daddy’s X-Men, but you can find some of them in this story. The story itself is worthy of your time and attention, and it will give you something to look forward to.