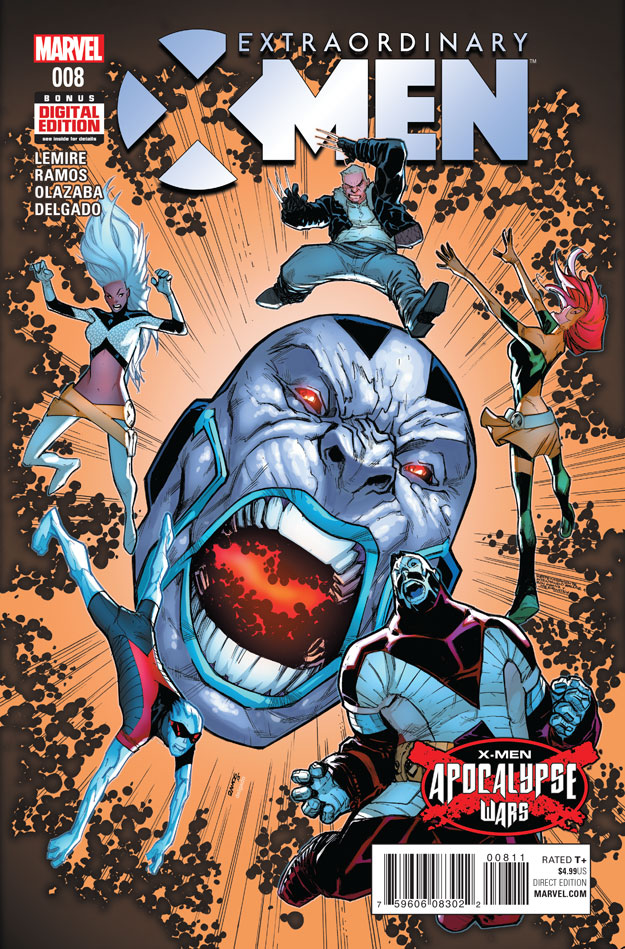 “To me, my horsemen.” That line finishes off the lead story in Extraordinary X-Men #8, but who says it and under what circumstances is remarkably different from the preconceived notion I had in mind when I opened the cover to this comic, written by Jeff Lemire and drawn by Humberto Ramos.

No, I’m not going to spoil it, but I will tease the fact that the Horsemen are revealed at the end of that tale, dubbed “Omega World” and that Lemire squeezes in the entire X-Men squad calling Extraordinary X-Men their home nowadays. The writer salts this issue with some action and some interpersonal development, giving reactive personalities to the members of the team, but stopping short of anything exceptional or character-changing. Logan (Old Man variety) and Storm have a conversation that is simply about surviving, but the abrupt appearance of (and reaction from) Forge indicates that perhaps there might have been a little more depth to the exchange than is immediately obvious.

Part of that fault falls on Humberto Ramos’s art. He delivers a wordless panel between the two X-Men veterans that looks like a borderline hostile staredown, due in no short fashion to the extreme (and very 1990s-like) lines splashed across the characters’ faces, making them less emotionally charged and expressive and more grimacing and mad. Ramos’ storytelling wavers between solid and challenging, again in no small part to the excessive linework. Some of the lines are used for shading and depth, description of settings and shape, but some are lines simply for lines’ sake. Ramos’s trademark exaggerated anatomy is even more pronounced in Extraordinary X-Men, and readers need look no further than the tiny noggin (which is dwarfed by his belt buckle!) on top of Colossus’ square torso or the hip-hugging belts Storm is wearing. Those belts would undoubtedly be an impediment when charging into battle.

When battle is engaged, Ramos’s framing choices slip between brilliant and hurting. Some scenes seem to be pulled back to reveal as much as Ramos can pour into a panel, while other scenes are obstructed or unbalanced by figures posed to look great. Inked Victor Olazaba does a fine job adhering to Ramos’ lines, and Edgar Delgado’s colors are vibrant and intense, but the art as a whole could do with a little less posing and a bit more storytelling.

Lemire also crafts a backup tale featuring Magik and her protégé, Sapna. The duo visit Doctor Strange, and as things do in comics, it all goes sideways. A magical threat attacks. Lemire and artist Victor Ibañez deliver a by-the-book meeting between the three, which, naturally, leads to Strange relying on an assist from the characters who call Extraordinary X-Men their home. Reminiscent of Phil Winslade’s style, Ibañez’s art is gritty and detailed, giving the tale a roughed up flavor, while also providing visual particulars to Strange’s Sanctum Sanctorum.

While Extraordinary X-Men #8 delivers on the promise of an apocalyptic future, it feels a bit unbalanced, as though it is buying time or padding throughout most of the lead tale. Storm’s musings chew up four pages of the comic before anything happens and the primary struggle in this book fills another six. Neither segment is particularly dense, which seems to indicate the story could have been a bit tighter.

That’s not to say this is a bad comic. Extraordinary X-Men #8 is actually an enjoyable comic, as readers are sure to find at least one fan-favorite character in this issue. Hopefully, the opening chapter of this adventure is not indicative of the pace to come, but rather a chance for readers to slowly immerse themselves in this new adventure. Maybe now that this installment is out of the way, things will pick up as Extraordinary X-Men plows forward into this Apocalypse tale.