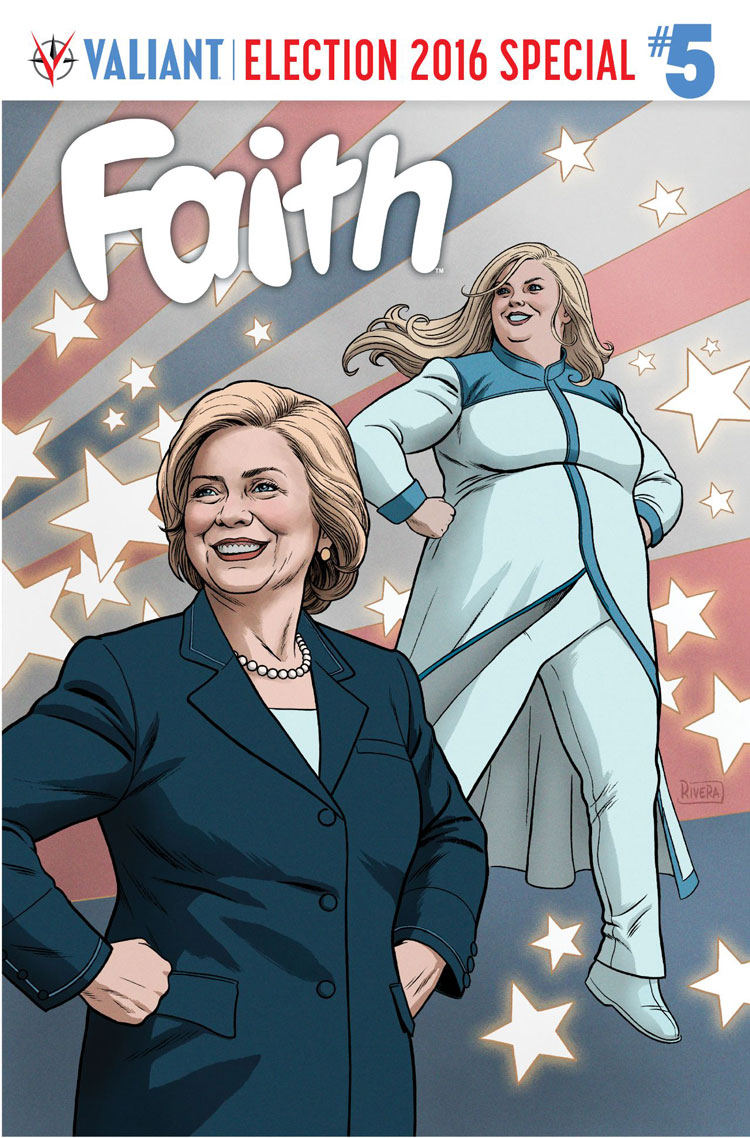 A trio of stories punctuates this oversized (but still priced at $3.99) election special, as Faith encounters a spoiled child star imbued with powers by a talking cat (!), rescues a psychic little girl prior to the return of the Renegades (!!), and meets Hillary Clinton on the campaign trail (!!!).

The last few days, I’ve been really struck by how pervasive this sense of division is all around us. It’s in our politics. It’s in our fandom. It’s unavoidable, it seems. No matter where we turn, there is someone out there not just with opposite taste, but in opposition to the very presence of us.

“Feminists shouldn’t even make comics. Comics are the last safe space for men.”

I mean, a) fuck that noise.

And b) fuuuuuuuuuuuck that noise.

But it makes me appreciate, in some ways, how bright the bright spots are. And for every Mockingbird or Nighthawk I mourn, there’s a Faith.

Until now, maybe it’s been easy to miss, this title tucked away inside the Valiant Entertainment line — the only one currently headlining a female character, I believe. A hugely successful four issue mini-series, leading to an immediate ongoing, Faith is literally what progressive comic critics dream for their favorite titles. It’s the success story we want, step by step.

And it is. Jody Houser is writing a character who is not defined by, but informed by, her body shape. She’s delivering a woman who balances proficiency in her role as a hero with self-doubt and self-humor, without ever letting it cripple her esteem. She’s providing a sense of true optimism in a market of hard-edged heroines and an happy adult woman in a tradition that tends to reserve happiness for teenage girl protagonists.

Houser is doing all of this, and keeping plot tight from month to month, moving Faith in and out of Los Angeles culture and daily life in a way that feels genuine, but not stereotypically “Hollywood.” Joined in this issue by Simonson and Roberts, Houser leads the pack with part one of a new story, introducing a new dilemma, and giving fantasy sequence artist Marguerite Sauvage another prime opportunity to exercise Faith’s deep nerddom.

I may not be that clued in to Sailor Moon fandom, but I gotta believe this double page spread is going to resonate for a lot of readers.

Hetrick brings a style to the rest of the first, full-sized story that’s not too far off of Sauvage’s soft, dream-like layouts, but with sharper edged inks and hard-lined panels. It’s a nice balance between keeping that portion of the story’s grounding in the “real world” and maintaining some consistency book-wide. Hetrick’s facial expressions and body language for Faith, especially in regard to the latter as a larger woman, are bright, natural, and expressive without falling into cartoon quality.

Simonson’s story with Pere Perez linework is fun — the veritable headliner for the election special, as it features a casual meeting between the hero and the woman who should be our next President. The correlation between a character (and book) like Faith succeeding in the market — the expectations it has to live up to and the unwarranted criticism it may receive — and Clinton’s own place in presidential politics for the last 40 years is not to be undersold. Simonson does a nice job of making that line of thinking pop without being too on the nose.

Of course, not to be undersold, the final story features script by Rafer Roberts and Colleen Doran art, a glourious treat in any event, but an especially exciting opportunity given her skill in illuminating Faith’s form, face, and figure. To be blunt, Doran delivers the most beautiful rendering of the hero I’ve yet seen, in a classic comic book style that really encapsulates best what Faith is all about.

A perfect jumping on point — no matter whether you’re voting Democrat (WOOT) or Republican (hisssss) — Faith #5 gives us the purest, most affirming sense of super-heroics on the comics stand today. Anyone out there arguing to Make Comics Great Again? You clearly blinked. Because for the true Wednesday Warriors, Faith already did that, and then some.