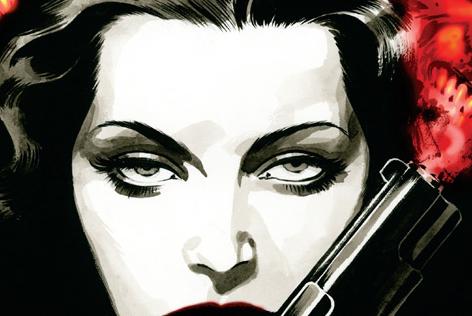 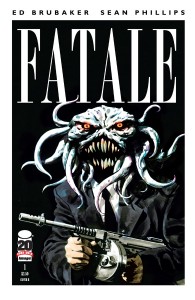 Comic readers, if you like an issue full of suspense, horror, drama, occult stuff and sheer eeriness,  this comic is for you. Ed Brubaker teams with oft-partner-in-crime Sean Phillips to bring forth Fatale #1, an excellent start to what could be one of the creepiest and most entertaining series of 2012.

Brubaker is right in his creative wheelhouse with this subject matter, dealing with corruption, criminal organizations and what appears to be secrets layered upon secrets. It is a rare treat to read a comic where a writer has such command over a story and brilliantly pulls a willing reader into what seems to be a dark world of deception, evil, and corruption. Fatale is not for the faint of heart, I will warn you, and crosses into a comics world that I typically do not care to venture, but Brubaker has written this issue so well I couldn’t put it down. I find a lot of comics attempt to evoke a feeling of suspense and fail miserably, but Fatale has suspense palpably dripping from it. From the first page to the last, I felt pulled into an eerie world filled with cigarette smoke and the real possibility that someone (or something) was going to jump out and take a swipe at me at any moment. At this point I can honestly say I have no idea what the hell is going on, but I enjoyed every second of it. Very, very few comics evoke this response from me, especially in this genre, but Fatale is also unlike anything I have ever read.

On art duties, Sean Phillips’ art fits Brubaker’s script like a glove. A script packed with this much suspense can only fly with the perfect visuals, and Phillips absolutely nails issue #1. Brubaker and Phillips have worked together many times in the past, and it shows in this issue. If I had to describe the visuals with a single word it would be “fluid”. The script and artwork flow together and work as one to bring this story to readers and it is some of the best I have seen from Phillips. There are no creepier shadows in comics than are drawn by Sean Phillips, and this issue of Fatale has set an extremely high benchmark for issue #2.

Pros: Hugely suspenseful, eerie script with excellent visuals to back it up.