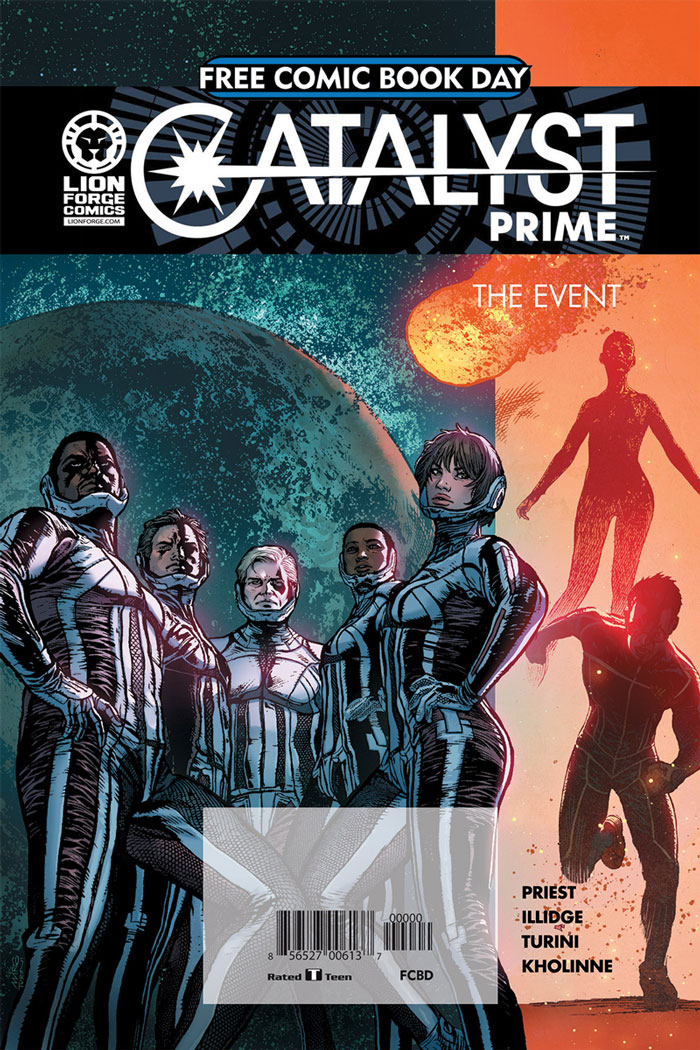 The Catalyst Prime Universe begins here with a primer that goes in-depth into the origins of the universe the upcoming publishing line inhabits and enough intrigue and detail to make any smart reader clamor for more.

In other words, this book did its job with gusto. Because the entire point of Free Comic Book Day for savvy publishers is not just to throw out something fun for a new reader, but to serve as a gateway to coming back week after week for more comics from their wheelhouse. And for a publisher JUST getting started, this is more critical than anything.

This week’s debut from Lion Forge, Noble #1, didn’t really live up to my expectations of what a grand debut should embody. Its story was choppy and slim, with art that didn’t rise past run-of-the-mill. This FREE original story, available today at (what I hope is) most comic shops celebrating Free Comic Book Day, is a total 180 from that.

Catalyst Prime: The Event features beautifully dynamic and crisp art and layouts from Turini, Rosado, and Kholinne — even shining in extended talking heads moments. It provides an amazing set-up for a deeply diverse world, setting the origin of so much of its action in Mexico, not the default United States. Its protagonists represent true diversity (i.e. not half white men with a sprinkle of a few women and POC) in largely centering Latinx, Asian, and Black women and men. Upcoming title Superb (coming in July) features a centered super-hero (!) with Down’s Syndrome. My hope, of course, is to see significant LGBT representation as well. With this track record in only 20 pages, I’m pretty optimistic.

The issue does represent glimpses of different upcoming threads, but nevertheless avoids feeling like a throwaway primer, particularly because of the INTENSE revelation at the end of the story that sets up so much of what you need to know about how Catalyst Prime is going to work. Priest and Illidge pace the story magnificently, peppering clues and teases while still providing enough for the reader to get a feel of the world.

If you are looking to jump into a bold new world that is sure to hold a lot of surprises long term and give you a universe that actually truly is more diverse, Catalyst Prime: The Event is the free book to grab today. Don’t miss it. This is the start of a better, more dangerous tomorrow for comics.