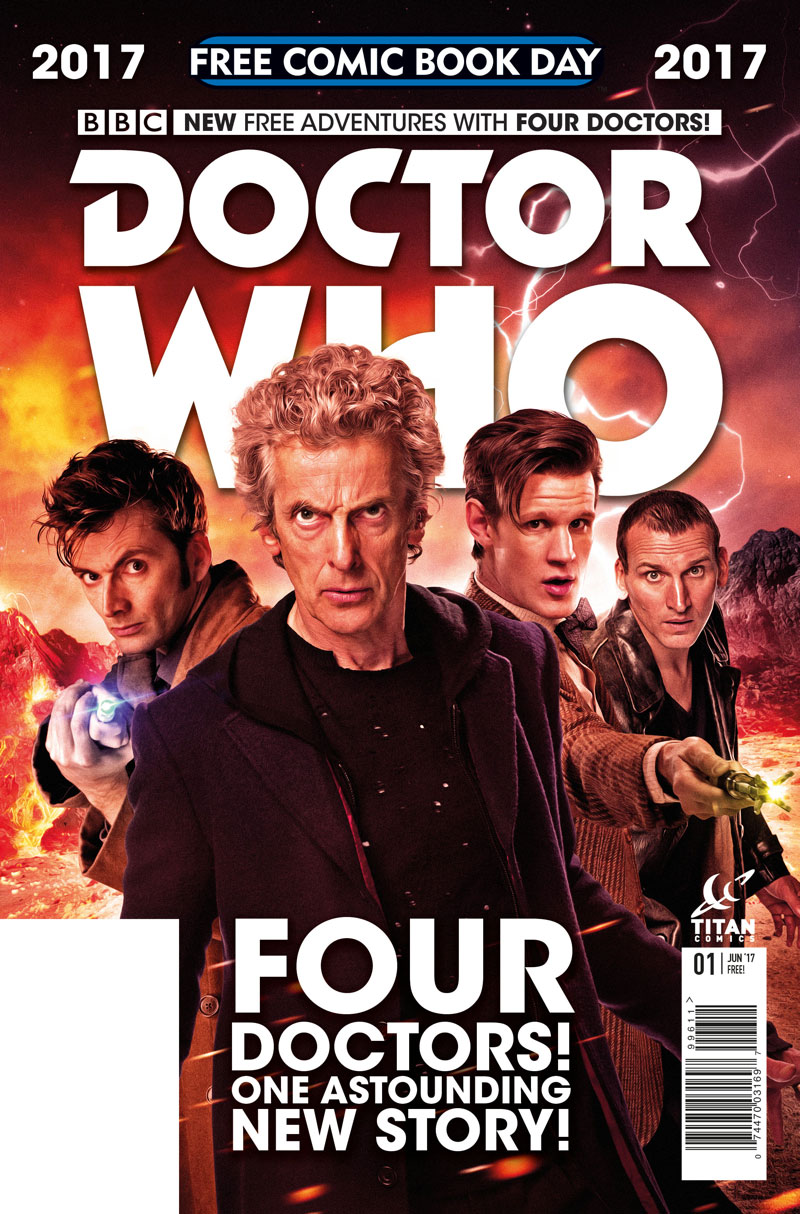 Beginning with the Twelfth Doctor (as played by Peter Capaldi on television), the story is set up of a strange alien world, familiar with the Doctor. It had descended into war, and through questioning of his companion, it becomes clear just what role the Doctor played in their feuding.

This is the first comic appearance of the show’s new companion, Bill Potts (as played by Pearl Mackie). Writer Alex Paknadel captures the spirit of Bill with brilliant quips about the Doctor’s noisy knees when he runs, and casting doubt on the logical of choices made in regenerations past.

To new fans, the Doctor is a single character that changes faces, bodies and personalities instead of dying. This comic takes advantage of that by showing various times the Doctor has visited a specific  planet.

The artistic team splits duties across the story for each regeneration of the Doctor. Flashbacks are of the Doctor’s various interactions with his alien friend Plex and the society he built. They all reflect the various personalities, foibles, and companions that the different incarnations, and therefore various comics series, showcase.

The Ninth Doctor is painted as lonely and compassionate. It’s from a time period where television companions Rose and Captain Jack are not yet traveling with him. Often described as the PTSD Doctor, this short interaction highlights another fallout from the Time-War the Doctor’s people, the Time Lords, had with the Daleks.

The Tenth Doctor’s role is more jarring. It’s a look at how cavalier this regeneration treats those he encounters. His companions, who play a prominent role in the ongoing comic series, take a backseat. This is emphasized even more with one of the greatest description of this Doctor, who was played by actor David Tennant, on television,”Great hair… extremely popular with mums.”

For those who have been watching Season 9 and the current Season 10, a familiar and controversial plot device is thrown into the mix. It will make super-fans speculate. Just how much media convergence and discussion do Titan editors and writers have with the BBC show creators?

The Eleventh Doctor’s turn is as perky and upbeat, as always. His companions get in a few quips and questions. It shows the familial link this Doctor’s era has always had on television and comics.

For those who have not been reading the latest issues there will be some quizzical moments for readers jumping aboard:

That’s honestly the only disappointment to be found in this issue, is the lack of detail or names for some of the Doctor’s companions. However, this serves as a duel role because maybe it’s these things that will get people to try these series out. The spirit and adventure are there. The artistic team does a great job of giving the companion’s reactions when they have little to no dialogue. It’s a lot of characters to juggle in such a short amount of space.

This issue also pays homage to Paul Cornell’s “Family of Blood” storyline by integrating a popular watch into the plot.

While not 100% new reader friendly, those use to the tropes, plot devices and lingo of the Doctor Who universe will catch on fast. Just like the television show, each issue is designed to give readers enough information to create an action filled story. There are also Easter eggs for those who have dived deep into the lore.

For anyone needing a sampling of the various personalities and adventures of the Doctors, this Free Comic Book Day story is for you.