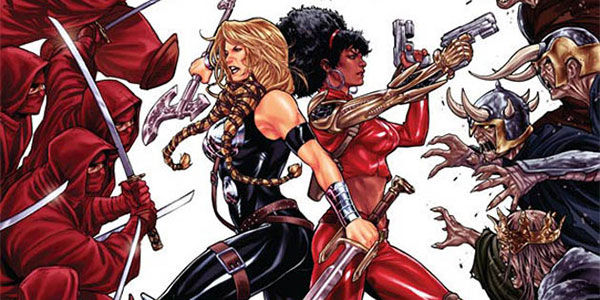 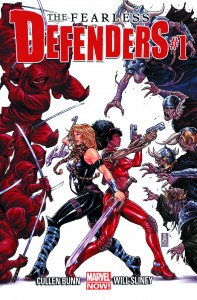 The cry for well written female-lead comics over the past year has continued to get louder, and Marvel is answering this year. Their latest submission, Fearless Defenders, hits strong and hard.

Cullen Bunn is purposefully keeping the focus of issue one narrow with the introduction of Valkyrie and Misty Knight along with an exciting civilian addition in Dr. Annabelle Riggs. The interchange between our two heroes lays great groundwork on the personalities of the Shieldmaiden and martial arts expert with fans who may not be familiar with their storylines. Fighting the bad guys is immediate and intense, the interchanges between the leads playful and exciting, the fun factor kicking high.

Dr. Annabelle Riggs is surprising in another fashion. Without magic, special physical training or special weapons to defeat zombie Vikings, Bunn has created an intelligent and powerful character. Online blogs immediately began buzzing with the realizations that this lesbian character had been introduced. Mentioning that does not spoil the story. It’s how it is revealed that is fun and humorous.

The art of the book is filled with action and purpose, except for the first few panels featuring Misty. Now, the first three or four pages had been released, uncolored for a month or more before the book came out. It was well established that the panels featuring the bionic ninja, Misty Knight, featured plenty of  her backside. By the third page, it’s not a big deal. She’s fighting and doing her thing to win. It’s just that first page.

There is no fight happening. Misty is simply talking. However, there she is striking what looks to be a potentially back-breaking pose. Now, she was preparing for a fight, so being ready to strike after verbally engaging an enemy is not a bad idea. The only question is, did her stomach have to stick out so far and her back have to curve in so much? Probably not. 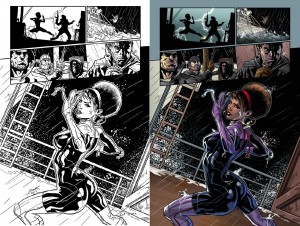 Veronica Gandini’s color work makes all the difference. Gandini has great use of highlight and shadow that helps the panels to come alive. It also keeps Sliney’s artwork clean and fun to look at, without overanalyzing.

What is fun and refreshing about Sliney’s artwork, besides the great zombie Vikings (did I mention there are zombie Vikings!) is his attention to the character faces. Each lead has her own look and personality. Valkyrie, Misty & Annabelle do not all look like the same character with a different paint job. The shape of their heads, tiny details and their mouth are all unique to them, reproduced in multiple panels.

That is something that is probably not seen enough in female-heavy comics. Other publishers, with several female characters in one book, can often change the color and style of hair and skin tone and call each woman a different name; however, the face is still the same. In this book, Sliney has given each character her own personality that can been seen on each page, which is just engrossing.

A solid foundation has been laid in Marvel’s ramp up in female-lead comics. Bunn has said that each issue after will add another addition to what has been promised to be a rather large team. This slow burn has been used in other series, and should work well to create emotional investment in each new team member. The hope is that any discovery or development with previous characters will not be lost in the new storylines. While Valkyrie and Misty are positioned to be mainstays of the book, Riggs seems to be so enjoyable and I hope that she stays around, is developed at a higher level and not lost in the shuffle.

The only way female team books are going to stick around is if people buy and read them. If that is something you like, then you need to read this book. This book should be looked at for its own merit, but it goes without saying that this is almost like a dry run for the all female X-Men in April. If Fearless Defenders continues to have a great mix of character exchange, development and action, I think interest will continue to grow.