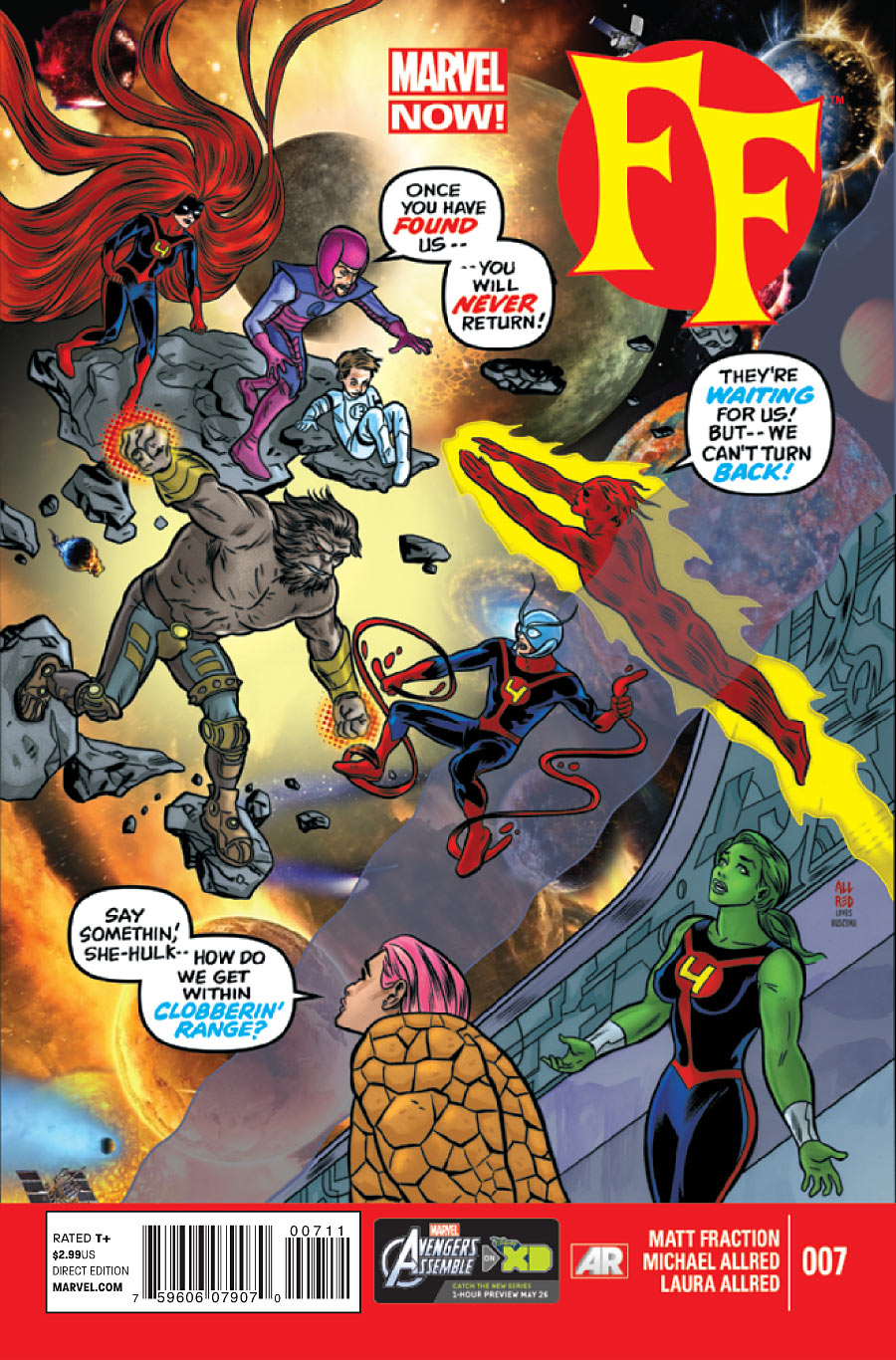 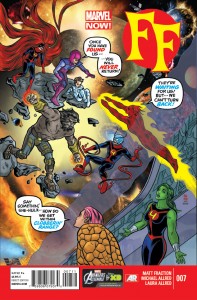 At their very, very best, a comic book will have a beating, very human heart in the middle of its madcap, hypercolored action, and right now, that’s a pretty good description of FF.

If the first six issues of FF were a little bit on the slow side — focusing on a group of second-stringers1 whose four-minute tour of duty has been extended indefinitely as they stumble around any sense of themselves or their mission as a team — then #7 picks up the pace, and then some. Ant Man, She-Hulk, Ms. Thing, and the kids fight an inter-dimensional battle not just to save their own lives, but to rescue the cloned child of a super-villain who was kidnapped by a member of their own team.

Amidst the (glorious) madness,2 Scott Lang finds himself forced to rise to his role not just as caretaker but teacher and leader of the Future Foundation’s children, and Darla Deering, pop star and girlfriend to the Human Torch, finally embraces that she can be a hero and not just an impostor in a Thing suit.

I’ve been a fan of Michael Allred’s art for a long time, and after seven issues of FF, I’m finding it almost hard to imagine that he hasn’t been put on a Fantastic Four title before. There’s something nothing less than Kirbyesque about his energy, imagination, and the shape of his characters. It would also be a crime to not give full credit to Laura Allred’s color work, which is nothing less than genius. She uses halftone dots throughout to convey the otherworldliness of the Negative Zone, but also in a closeup panel at the end of the issue to provide a very different but totally perfect sort of comic-book-ish authenticity to the moment.

And there’s perhaps no moment as satisfying as when a raving lunatic in a purple helmet declares that the Future Foundation and all the children in their care “pale before [his] heteronormative cisgendered classification of family,” and then Ant Man punches him in the face.

Fantastic Four has always been a comic about a very unusual, very real family exploring and surviving the unimaginable. FF is that tradition at its best. Its very, very best.

1. And She-Hulk. Let no one ever call She-Hulk a second-stringer.

2. For example, in an inspired move, we discover that at certain scales, Medusa’s eyelashes are every bit as dangerous as her serpentine scarlet tresses.