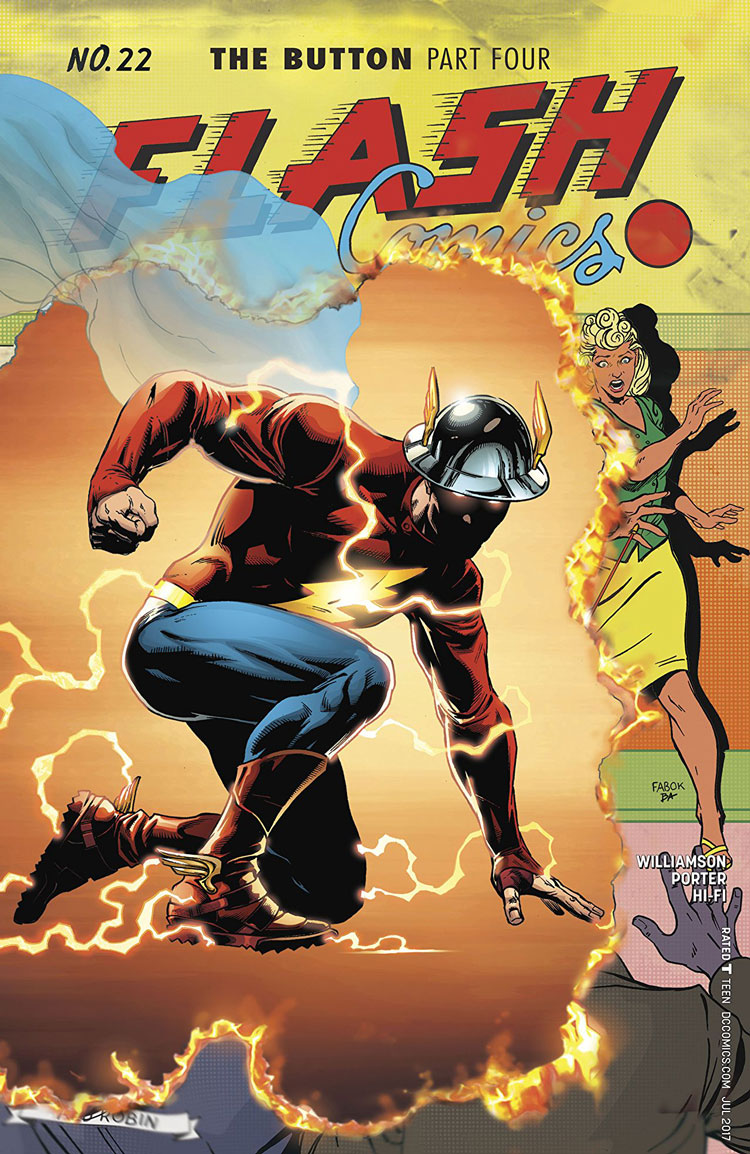 The mystery of “The Button” concludes as Batman and the Flash fly through the time stream in pursuit of the Reverse-Flash, who is hurdling toward his inevitable confrontation with a god who would take his life. But time is beginning to unravel, and a new face follows the arrival of Wally West and Thomas Wayne — one from deep in the Flash’s past. But will Barry remember him?

For all its hype and controversy, the true magic of “The Button” crossover between Batman and The Flash seems to have been lost in the shuffle. That is, the relationship between Bruce and Barry. It’s a frequently unexamined parallel, and for good reason. Historically, the two characters have little in common. But with Geoff Johns’ revisions to Barry Allen’s origins these past ten years, we have met a Flash who has suffered much the same tragedy that Batman has.

Barry’s outlook — and the difference between him and Bruce — is so aptly summed up by Joshua Williamson in the conclusion of this arc, as the two stand before Thomas Wayne’s grave and Barry refers to the glimpses of tragedy undone they’ve both experienced as a “gift.” It’s plainly hard for Bruce to understand that perspective, having spent most of his childhood and adult life mired in a darkness Barry couldn’t even begin to perceive. And in some ways, that perspective speaks of naiveté, but at the same time, we get to see how deep the cuts are to Bruce, and just how different these two men are, even in the face of similar life experiences.

Williamson takes these emotional beats and grounds what would otherwise be a somewhat perfunctory issue. We know what happens to the Reverse-Flash, as it already played itself out in Batman #21. And while we get a slightly better glimpse of the big blue antagonist in this issue, any and all motivations and direct answers remain shrouded in mystery.

We also anticipate, thanks to a stunning cover from Jason Fabok and Brad Anderson, the reappearance of Jay Garrick, much in the vein of Wally West’s reappearance in the DC Universe: Rebirth special — although with much more somber results.

But none of that is the real treat in The Flash #22. Indeed, it’s these moments of character that Williamson infuses throughout this mad dash through time and its aftermath that bring this issue to life. The Reverse-Flash’s megalomania. Barry Allen’s eternal optimism. And the first signs of crushing doubt for a man who’s spent his entire life pushing forward, never stopping. That the Batman has at last encountered something that gives his mission pause? That’s an extraordinary moment.

All of these moments are delivered with vibrant dynamism by artist Howard Porter, whose forte for action and the heroic pose are the ultimate ode to the classic Jay Garrick’s first full appearance in over five years. Porter’s expertise in the dramatic posture serves the issue well, balancing out Williamson’s infusion of small character moments, although there is some manner of stiffness in the most crucial of these scenes.

However, once it comes to the pacing and rendering of what little we see of Doctor Manhattan (at last), there’s a real majesty to Porter and Hi-Fi’s delivery. Each take extra care with the details, from floating pieces of dust to the expanding glow of blue creeping in slowly from panel to panel. And once that giant blue glowing hand appears, you can almost feel it coming out from the page.

With the conclusion of “The Button” in The Flash #22, Joshua Williamson, Howard Porter, and Hi-Fi have given us more than simply a lead-in to Geoff Johns and Gary Frank’s confrontation between the Big Blue and… the Big Blue. They’ve delivered a carefully pieced together character study of Barry Allen and Bruce Wayne that is illuminating in their differences, but far more provocative in how their similarities bare out.