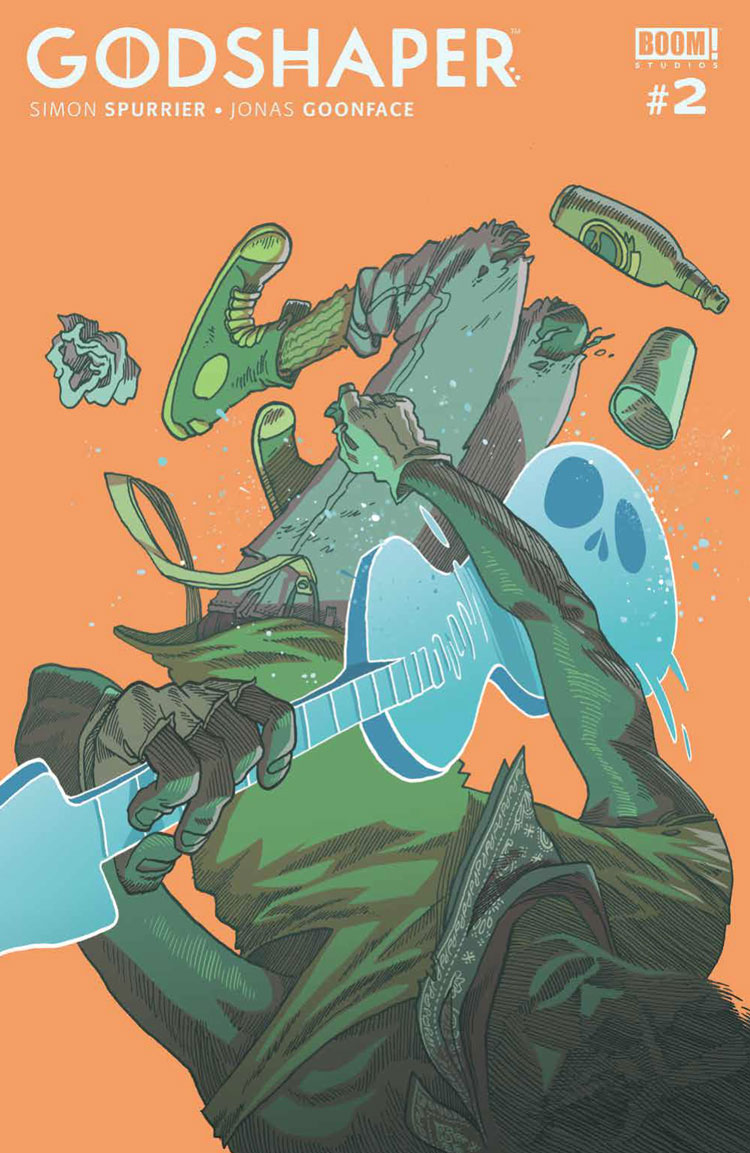 You deserve that bacon.

Ennay recounts his meeting with Clara to an aptly listening Clench and their new guest, Sal. The next day, their reunion turns bittersweet as Ennay has a new responsibility and reveals more tenuous aspects of being a Shaper. In the end, he finds that he will have to confront something he hoped to avoid in order to make sure no one gets hurt.

More of the setting of Godshaper is unfolding in its second issue. While the inaugural chapter set the stage for this wildly weird word, its subsequent installment begins to address more of the cultural particulars in depth. It’s important to take a story as is, but I disagree that they exist in a vacuum and that they don’t draw parallels to real-life experiences. That being said, some of the elements of this environment and its social factors work within the story but have a different relationship to actual events.

The narrative force of oppression has a strange presentation in the story. Shapers are clearly seen as secondary citizens, but I feel like something is missing to fully tie them to our reality, a connection which would make the world of Godshaper that much more interesting. In some ways, Shapers are treated like Marvel’s mutants, themselves an easy but incomplete ‘metaphor’ for oppression. Another way this lands differently for me is the relatively few characters of color and how race somehow does not figure into the politics of the story. It makes sense that there is not a full investigation into intersectional politics, but it does make the public standing of Shapers more complex with the presence of Ennay.

I love that intimacy between men is a feature of Godshaper, but the scene where Ennay and Clench have sex creates askew parallels to our world. Again, when oppression of anyone is a facet of a story, I do feel like it needs to have some relationship to actual experiences because otherwise this sort of element can easily fall short. There is a message I’m still trying to decode in how Shapers are promiscuous, how that sets them apart from others, and how their sexual behavior seemingly vilified. It immediately struck me like the dangerous metaphor of queer hypersexuality, but I am unsure how it fits into the larger narrative that holds the characters and their environment.

I get the impression that Simon Spurrier is trying to do more than tell a story of gods, humans, and everything in between. If that were not the case, we wouldn’t have parts of this comic that relate to dynamics of oppression. I feel that some of what Spurrier is addressing definitely gels, while other parts may not have a specific nuance to bring the story fully home. While I’m still figuring out the specifics of the politics within the story, I do appreciate Spurrier’s development of Ennay. In this issue, we see more than the bad-ass queer musician; we see his compassion and dedication to keeping people safe. While the shield he puts up is gruff and abrasive, there are parts of him that long to protect others and that I feel are valuable parts of his character.

Jonas Goonface continues to illustrate this comic with an apt style for weird and nondescript elements. I like that detail helps to portray visceral facets of the story, such as intense emotion, pain, and intimacy. The oddly shaped Gods are a perfect touch because they express the strange existence of these creatures. Goonface’s colors display important emphasis and perspective, like the campfire scene between Ennay and Clench, as well as later when Ennay is attacked by a town’s mayor. At times this contrast in shades put characters at odds with their environment, while in others it enhances tone and emotion in important scenes.

Colin Bell on letters helps to convey cadence and emphasis in speech. The use of lightly colored letters adds a dimension of reality that mirrors everyday speech. Bold letters help to distinguish what’s important in dialogue beyond their physical representation. Without Bell’s letters, Godshaper would be missing something vital.

I continue to be impressed with Godshaper even with my reservations. Beyond the mind boggling story and visuals, it provides a helpful discussion of social politics, their parallels in fiction, and why they matter in relation to reality. With odd creatures and overtly queer presentation, this comic takes many moving parts and puts them together to create a tale that is as awe-inspiring as it is thought-provoking. With the worldbuilding of this second issue, I’m curious about how the story will continue to develop.