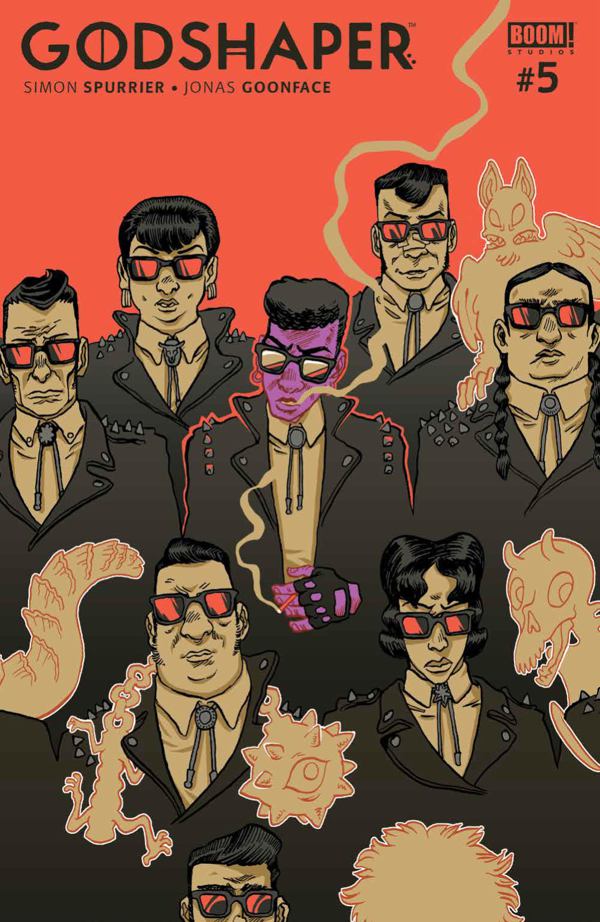 Sal and Smudge are fretful about getting by while their friend is in the enemy’s clutches. Ennay himself begins to learn more of twists and turns about the predicament he wanted no part of. With alliances wavering in every moment, it’s hard to see how things will turn out for our crew and what their endgame will be.

Godshaper #5 doesn’t hone in on politics the way that previous issues have, but it brings a new element to storytelling nonetheless. The series’ penchant for moment by moment detailed is left behind in favor of a style that draws upon the greater, more overt emphasis in each scene. The story falls within two primary contexts which reveal information that seems to be slightly disparate than what we’ve seen before, deepening lore and giving clues as to important details which inform the major characters’ pasts. All of these factors make this issue’s developments as propelling as they are surprising.

Simon Spurrier puts Ennay at the mercy of his environment in a much more acute manner than we’ve seen so far. Our protagonist typically has an air of heroic defiance about him, leaving him to challenge everything placed before him, but this issue in a different spin on his presentation. Spurrier turns Ennay, as well as his companions, on their heads, forcing them to work in ways equally distressing and desperate. Adding hardcore antagonists to the fore only enhances this effect, creating a subtly developing effect for the main characters that is beginning to challenge how the story has been shown to this point.

Jonas Goonface supplies odd aesthetics that draw on emotions vital to the story. Godshaper is a series defined by art that is colorful, innovative, and rebellious, but what comes out in this issue is not the status quo shaking visuals we’ve seen before. Instead, Goonface pulls out characters’ pain and raw emotions. Compared to the previous four issues, much more detail is put into everyone’s portrayal. There is much less of the panned out, simplistic expressions used for comedic effect; rather, what we see is a near microscopic level of detail regarding people’s reactions. Goonface’s talents are put to good use in this issue through that pointed look into characters’ feelings, matching the much more intimate foray into their place in this grand story.

This issue of Godshaper manages to touch on the politics introduced in preceding issues while also giving us a direct look into what drives the story. I like the departure from the more political themes of the other installments because this issue does not betray them and instead offers a deep, profound exploration of the major players of the story. There is so much mystery left to uncover, yet I do not feel that the comic has left readers out to dry. In fact, Godshaper #5 is indicative of this creative team’s ability to tell a story and to offer new perspectives with each issue while still being consistent in theme and representation.