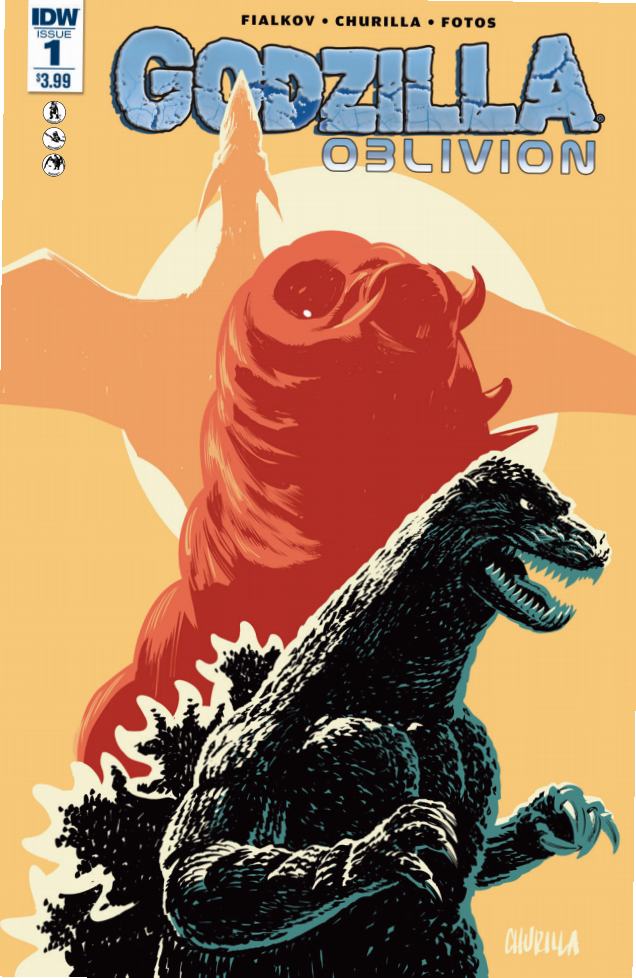 Roar, human. That there? That’s Godzilla telling you that he’s got a brand new IDW series out from Joshua Fialkov, with art by Brian Churilla and colors by Jay Fotos. I may not be a huge Godzilla reader, but I’ve been craving some crazy action and big monster fights lately, so this new series could not have come at a better time. The first installment of Godzilla Oblivion brings the monster pain, providing some exciting kaiju wrestling matches splashed across the page beautifully. But…don’t expect too much more.

The premise of this book is nothing but fun. Godzilla Oblivion #1 follows a group of scientists who cross a dimension into a dangerous warzone of big ol’ monsters. In this book, a robotic Godzilla roams the streets, fighting against an assortment of giant creatures. The group comes across a three-headed terror and attempt to make the trans-dimensional hop back home, but may have an unwanted passenger tagging along.

The story Joshua Fialkov is telling is exciting, filled with awesome monster fighting action. However, the book is rather shallow. There’s not a lot to grasp onto outside of the cool battle scenes. Perhaps a Godzilla book is not the place to have a thought-provoking story, but I feel almost zero attachment to the characters, the world they live in, and the war-torn world they jumped into. The dialogue and pacing of the book is swift, and the writing itself is well done. Overall, this is a book that’s probably best enjoyed at face value, so if you’re looking for something with a few more teeth, you might want to go for something else.

However, the art is pretty spectacular in this book. Brian Churilla has really brought his A-game to the kaiju genre, drawing some monstrous creatures that could rip your head off. The art has a smooth quality to it that flows from page to page, a constant stream of upbeat action. Jay Fotos’ colors are generally a solid fit for Churilla’s art, but they look really stellar on the panels that are heavy in black. The contrast is extremely appealing in those panels, adding to the drama of the action. The aesthetic quality of this first issue is strong, making the creatures sympathetic at time and moving the story along an an energetic fashion.

Godzilla Oblivion is all about the monster battles, bashing in giant skulls left and right. The book definitely has a sense of exhilaration that is a marker of this genre. While I wish we were able to get to know the characters a bit more, the plot is exciting and adventurous.