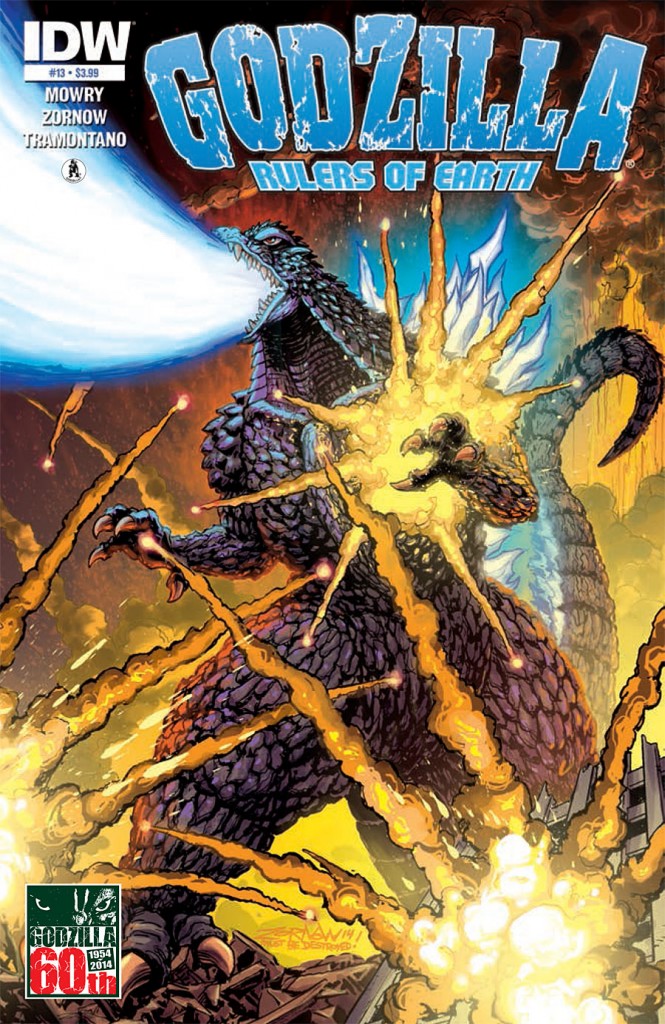 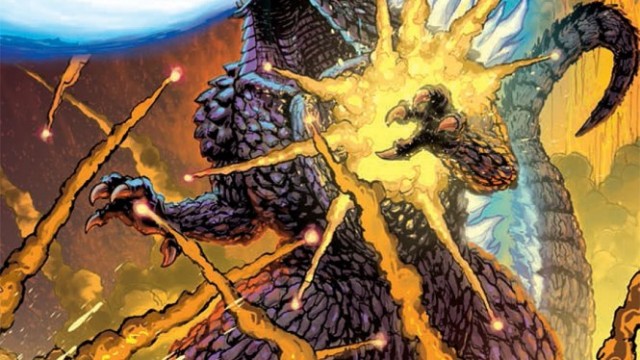 Godzilla: Rulers of Earth #13 picks up four years after the annihilation of the Devonian Kingdom under the sea. The world hasn’t been experiencing high frequency of monster sighting since the decline of the kingdom. This includes the big man himself Godzilla. With four years since a major sighting and Godzilla believed to be dead, CKR— a kaiju research group— is struggling to justify its means as a competitor introduces a more cost effective alternative to the monster problem.

Rulers of Earth #13 is an enthralling comic in concept alone. Chris Mowry and Matt Frank crafted a story in which it follows the humans as they adjust to life without Godzilla. The comic opens on a nightmare where the lead character, Ms. Castrall, witnesses Godzilla returning to unleash his fury on the city. She subconsciously knows peace is fleeting and eventually there will be a return to the past way of life and constant struggle. Additionally, the fact this think-tank has to justify its funding is interesting to me. The application of real world elements to the world of Godzilla has been a trademark of the franchise and that holds true here.

Rulers of Earth #13 feels like a perfect representation of the movies namely the first act of a Godzilla movie. The characters are adapting to a return to normalcy, but reality is soon to set in that normalcy is not what they thought it was. There is more focus on the human characters (the monsters do get some time, so don’t worry) and there is a villain established in the closing pages that sets up a major showdown in future issues.

The story of Rulers of Earth #13 is tightly focused and doesn’t squander pages to pointless non sequitur. Rulers of Earth #13’s pace is quick and to the point. No segment overstays its welcome, yet all receive proper time to breath. The story is mostly a bridge between arcs. There is some resolution to prior events, but not enough to call this a cool-down issue. It primarily focuses its efforts on setting up the next arc effectively.

The dialogue by Mowry is stilted at times, especially during the Congressional budget hearing segment. An example of this would be the back and forth between the Congressman and the head of CKR doesn’t feel natural. It feels like it was written instead of something two people would have said. The canned effect of that scene is off putting.

There are some great things about the dialogue, too. The sequence between Ms. Catrall and her co-worker was funny with good banter, while still expository in the best way possible. It provided enough information for a new reader to grasp what is going on and what they have missed. The villain’s monologue is another high point for the comic. He comes off almost religious zealot in his pitch for a new more affordable Mechagodzilla (luxury quality and a sedan price). He is delightfully animated and charismatic.

The art by Jeff Zornow is a bit uneven. It is apparent the characters are drawn in his particular style. It works mostly. The figures are uneven around the edges and could use refinement. The scene that brings that to mind is the Congressional hearing. Mr. Woods is animated look but very stiff. The scene is a dramatic talking heads scene — crucial to the comic. It just doesn’t flow well.

Zarnow attempts to be dynamic in the scene but it comes off as a bit stiff. They felt like cardboard cutouts at time. This will improve with experience and refinement but it is needed. Zarnow does a spectacular job with his monster work. They look amazing in detail and scale. They are massive beings and you can feel the heft behind them. That is no small feat and Zornow pulls it off to great effect.

Another part of Zarnow’s work that is uneven is his compositions. He breaks a major rule in comics with a couple of panel breaks. Panel breaks are when you draw something outside of the laid-out panel. The panel is meant to represent a frame of view for the reader almost like a frame of film. To break a panel you are placing something out of frame. However, all rules in comics can be broken if the ends justify the means. You have to understand the basics before you can break the rules. The effect if done right can provide energy to a page and make it amazing to look at. If done wrong, it doesn’t sit right and is noticeable like a sore thumb.

Zarnow uses them twice on full shots of the lead Ms. Casprell. One was great at setting up shock for the character and brings the eyes attention to the awe on the face and in the body. The second one is pointless other than an establishing shot that could have been done with proper scaling and composition all without breaking the panel.

Zarnow does display at times bringing the panel in too tight on the characters and making it feel like a busy panel. It does fill the void, but often negative space is best to have. It is interesting that he does seem to frame his panels too tight at times because there are scenes with Godzilla and humans that are amazing use of scale and perspective. Zarnow puts such great detail into the smallest characters and it works. He displays great eye for scale and that is key to a monster comic like Godzilla. The fact he tends to do that makes it feel uneven and unpolished at times.

The inking by Zarnow is mostly solid; some pages are overworked but he is going for a more detailed style and it works for him. He delivers a solid job with thick bold lines and seldom use of halos which are only found on panel breaks. The details in Zarnow’s inks are astonishing and he does it without mucking things up like most artists is great.

Colorist Priscilla Tramontano brings a wide palate of colors with a variety of looks. Inks are clear and not over done with extra effects. She makes the page pop with brilliant use of contrast that makes the book easy to follow and compliments Zarnow’s animated style. Tramontano does a stellar job here.

Overall, Godzilla Rulers of Earth #13 is a great jumping on point for new readers who want to see a wide variety of the Toho monsters and want a comic with a feel of a movie. The story is enthralling and to the point in its direction, setting up a showdown that is a fan favorite with hopefully some twists along the way. The art, while uneven, doesn’t break the comic. It is just unpolished in its style and with time will become more refined in style in technique. There are makings of great things in Zarnow but still some work to come. At the end of the day, I enjoyed Rulers of Earth. It was a decent comic that most people will enjoy.