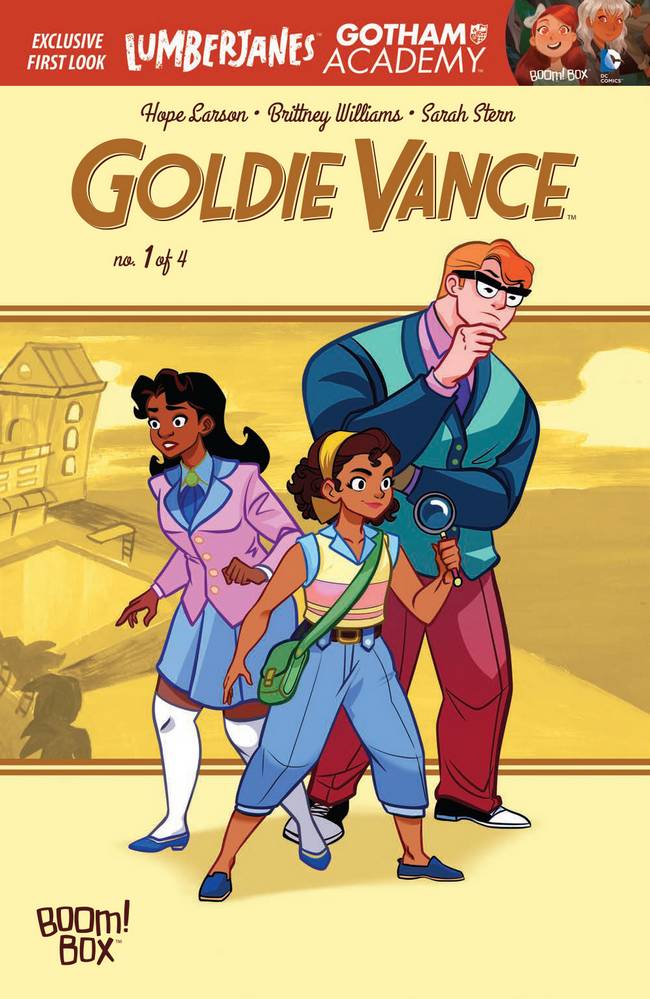 Using an art deco font (with a hint of Indiana Jones about it) for the logo and setting the tale in St. Pascal, Florida, Goldie Vance #1 projects fun and adventure from the start. Written by Hope Larson with art by Brittney Williams, colors from Sarah Stern, and letters by Jim Campbell, this debut chapter introduces Goldie and her supporting cast in the setting of the Crossed Palms Resort.

Goldie’s father manages the resort, so Goldie is quite comfortable there, serving an ambassadorship between the reader and the characters in Goldie Vance #1. Walt, Cher, Rob, Mr. Vance, the housekeepers and the yo-yos all weave into the story, as a mystery crops up. Goldie isn’t a detective by trade, but her interest in solving cases draws her in, giving this issue a story worth following.

Larson gives readers a complete story, not quite done-in-one, but certainly consumable and satisfying in one chapter. A new mystery is teased out at the end of Goldie Vance #1 to inspire readers’ return, as the next installment will almost certainly continue to add to the world around Goldie Vance. Larson makes the conscious choice to avoid caption boxes in lieu of thought bubbles. Campbell masterfully sets the thought bubbles into the panels, solidifying the whimsical visuals at the heart of this comic book.

Williams’ art, like the story itself is friendly towards younger readers, but detailed enough to absorb the readers’ eyes and imaginations. Williams is able to draw cartoony figures without reservation, but her choices come across more as style decisions than story-driven. Every character in the issue is recognizable and consistent. Even silhouetted, they would be distinguishable, one from the other. Williams’ storytelling and camera choices infuse the tale with energy, while Stern’s colors brighten the pages.

Larson and Williams set the twenty-two-page Goldie Vance #1 in an unspecified time period, allowing it to be timeless, but there are some dialog choices and visual cues that give the story a throwback feel. Whenever it is supposed to take place doesn’t preclude this comic from being a fun, introductory romp that could easily take the leap into other formats.

I recall seeing comparisons made between Goldie Vance and Nancy Drew and Encyclopedia Brown, but this transcends comparisons, drawing inspiration as respiration, instead of trying for imitation. It also adds in a certain level of blissfully ignorant confidence found in Scooby-Doo (minus the dog) adventures. Goldie Vance #1 is a comic that readers of all ages will be able to enjoy, but the young-at-heart will simply devour.