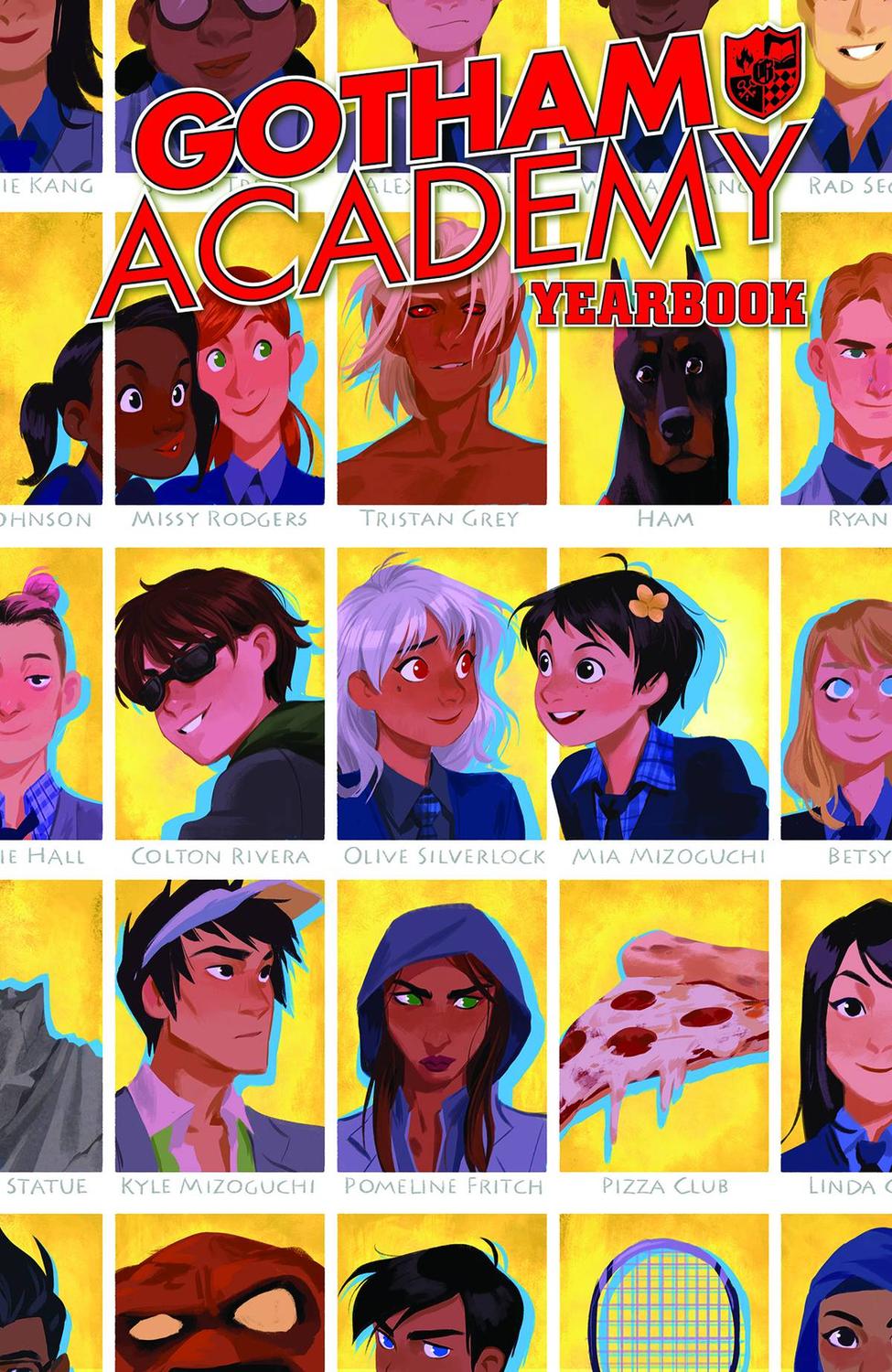 The semester is OVER! Time to look back at all the fun times. Sign a few yearbooks. Best friends forever, you know. And for Olive and Maps, it’s all that and more, as Gotham Academy goes into flashback mode with some very special guests…

I admit it. I was scared.

When you have a hit book like Gotham Academy that seems like the perfect communion of writing and art, shifting into an anthology format for a storyline is a really big deal. The potential for it feeling like “fill-in” — or worse, a total disconnect — is very, very real. But what we have instead, with this first of four issues centered around Maps scrapbooking some of her and Olive’s untold “greatest hits” of the year, is an ode to greatness that lives up to the spirit of the original.

How did it happen? I suspect it’s because these creators love the characters of Gotham Academy just as much as we do.

For a title that’s had scarcely more than a year to establish itself, Gotham Academy has certainly inspired some greatness here (and maybe reignited a little inspiration along the way too). It’s hard not to squeal in just a little bit of glee — no pun intended — with the appearance of Dustin Nguyen’s art on the first vignette story. For those who recall fondly, Nguyen’s art donned one of the first truly all-ages (kid AND adult) books DC produced in years with Batman: Little Gotham, and the spirit of that title unmistakably lives on in Gotham Academy. And what’s so funny about it in this context is that it’s possibly the least stylized art of the three vignettes we’re welcomed with here. THAT’S saying something awesome.

The curation of this issue (and I suspect, issues to come) is so well done, it makes the departure of artist Karl Kerschl (honestly heartbreaking as it is) a little easier to take. Katie Cook’s exaggerated style, a blend of Kupie doll and Monster High-looking expression, is so endearing, especially when introducing new characters of such drama to the title. Following that with the equally expressive, but much more adolescent, styling of Kris Mukai on the tale flashing back to Ilsa MacPherson’s high school years is a nice contrast that sets the stage for any number of possibilities in the future.

There is literally an entire history of Gotham City and decades of yearbooks that can provide material. And where that could come off as inconsistent, it only makes me more excited for the possibilities. I want to know more about Hope Larson’s new character, the mysterious Toni (Blindspot?), and her ongoing relationship with Professor MacPherson. Her curiously nebulous power (a line drawn very carefully with Olive over the past year, that “is it a power or not?” line so finely walked) makes me wonder if we’ve already witnessed her walking the halls without ever having noticed. Derek Fridolfs’ focus on Colton and Eric, as well as Katie Cook’s introduction of a new nemesis in Dillyn, again add to the richness of the world without detracting from the main event.

Where I’m also impressed this month is the significant improvement of Adam Archer’s framing pencils and Sandra Hope’s inks over last month’s issue #13. By contrast to the roughness of the Robin War tie-in issue, these pages capture much more of the flavor of what Kerschl had developed. And while the layouts are not as demanding in scope as a normal issue of Gotham Academy, the character expression, body language, and mood of the environment is right on. His partnership with regular co-writer Brenden Fletcher makes me confident this collection of stories will feel consistent with the first two volumes when they hit my shelf, and the hands of any number of devoted fans.

A bold move for a title so young, the Gotham Academy Yearbook starts off with a bang in issue #14 and I couldn’t be more pleased. Every creative team on this issue could launch an ongoing title at DC Comics — about anything — and I’d snatch it up in a second. Here’s hoping this primer is just that, a way for DC to test the critical waters or get us to dip our toes into the magic that is some of these story styles. Because after reading Gotham Academy #14, I want more.