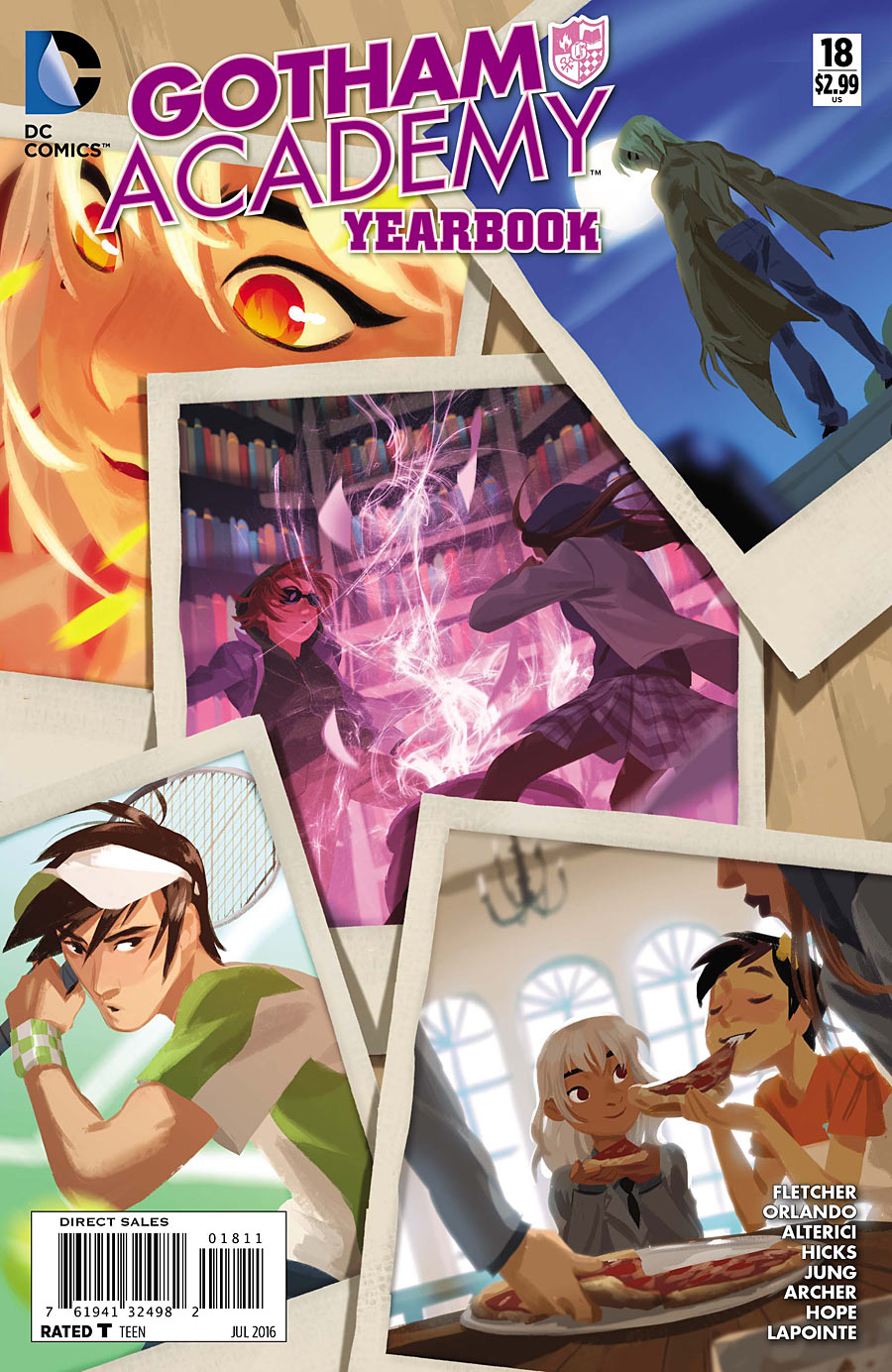 The wild goose chase is almost over, as Robin the Boy Wonder leads Gotham Academy’s own Dynamic Duo — Olive Silverlock and Maps Mizoguchi — down memory lane. But what’s waiting at the end of the road for the super sleuths? Knowing Damian, it’s probably what they least expect!

The last year and a half have been something of a revelation when it comes to what’s possible when you open up the mythos of the DC Universe — even one small corner of it — and not be afraid to work against the grain. In this case, the grain is a decade worth (at least) of in-canon Batman comics without much in the way of levity, delight, or humor.

Mind you, those were some seriously awesome serious comics. That’s not in dispute. But “discovering” Maps and Olive within the halls of Gotham Academy has been a revelation. And it’s rubbed off in a lot of ways across the Batman family. And for as much as this comic has gone against the grain of the Batman line, “Yearbook” has taken that a step forward and given us a genre chaos that shouldn’t work in such confined space — but does.

As an opportunity to delve a little deeper into some of the faculty at the school — how Orlando ever remembered Sterling Silversmith, I’ll never know! — “Yearbook” has been a fun way to get some depth and background into the world before the next big story arc commences this fall. Some of it has been goony. Some of it simply adorable. This issue’s chapter on Professor Milo by Fletcher and Moritat actually fills in some key moments in the run so far.

But the best moments by far have been some of the most irreverent, such as issue #18’s vignette on Maps’ first driving lesson from big brother Kyle by writer/artist Faith Erin Hicks and colorist Serge Lapointe. In only two pages, the eccentric, inescapable enthusiasm that is Maps Mizoguchi has been captured so perfectly.

And it’s through the divergence from the regular style of the title that Karl Kerschl set in tone (which in itself was a divergence from the standard bearers of Gotham City line and shadow) that we get that perfect distillation. No other character could shift facial expressions and moods from a single panel to another and have it be so believable. And I daresay no other artist could pull that simplicity of emotion off like Hicks does here.

Alterici and Moritat both lend their own takes on the Academy denizens that feels like a dramatic memory, with the former giving this beautifully warm glow and softness to hard-nosed Pomeline and her mother. All in all, the only art sequence that seems to fall short is Jung’s, and there only because it feels too close to standard comic book art, fetching backward past the naturalness of Archer’s connecting pieces to your regular super-hero fare. Still strong linework with good range of emotion, but lacking the uniqueness of some of the other pages.

When all is said and done, Gotham Academy “Yearbook” — like the series as a whole — has been an experiment well worth tackling, and one that’s given us moments we just haven’t seen in the DC Universe since Wednesday Comics, if then. Thankfully, the summer break in the series is shorter than anyone could have imagined with a one-shot hitting in August, the series Next Semester starting in September, and BOOM! Studio’s Lumberjanes/Gotham Academy crossover series running six months starting next month.

So, if you thought you were going to have to miss Gotham Academy, well, sorry to disappoint. Because there’s no stopping this title any more than Maps can be stopped. Robin knows it. Olive knows it. You know it, too. (If only there were a Maps emoji with heart eyes!)