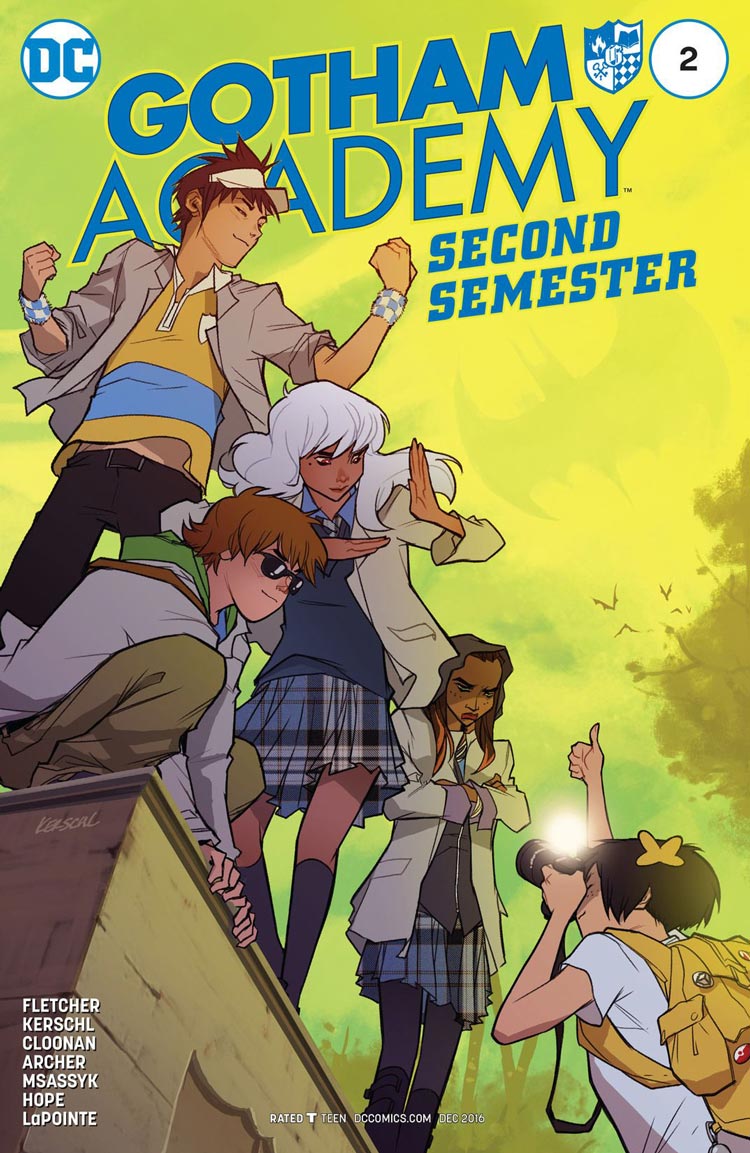 Every member of the Detective Club is back on campus, ready to start second semester at Gotham Academy! But there’s a new club recruiting members — the Witches Club — and a bunch of students missing. Are they connected?

With the entire cast back on the board, Gotham Academy: Second Semester #2 simultaneously feels more like a #1 and a less than complete story, with the writers focusing mostly on set-up and not as much on character relationships. In some ways, that’s an extra opportunity for interested readers to jump on, but I’m not sure there’s enough of the overarching cast featured to grab onto.

On the other hand, if the focus had to be on any character, the choice to narrow in on Maps Mizoguchi is pretty damn great , especially after last issue’s sole focus on Olive and her new roommate, Amy. Gotham Academy may ostensibly be Olive’s story, but Fletcher, Cloonan, and Kerschl make it more clear than ever that Maps is the true heart of the book — no question.

Following Maps through halls and down paths, we get introduced to a lot of characters in rapid fire, but there’s not much sense of what they mean to each other, with the exception of Olive and Kyle. In some ways, it’s a reflection of the distance between Maps and Olive, as her place is seemingly usurped by new interloper (and non-Detective Club member) Amy. We get her upset, even though Fletcher and company are careful not to let it go over the top.

In some ways, it illustrates Maps’ innate optimism, that even at her lowest moments, she is still that trooper that keeps moving forward. There’s nary a sign of Maps’ trademark fever pitch of excitement, and that absence weighs heavily on the page. And perhaps that’s why Archer and Hope’s layouts and line, while clean and easy-going, lack a certain energy to them as well. The dynamism we get when the entire Scooby gang is in action is replaced by stacked panels, leaving the read fluid, but a little less engaging.

Unquestionably, what pulls the book back together is the sublime background painting by Msassyk and the work by master colorist Serge LaPointe. These artists, now old hands at the environs and personalities of Gotham Academy, lend this title such a magnificent continuity. No matter what narrative or which artist lays out pages, the warm glow and cool fade Msassyk gives scenery is unmistakably Gotham Academy. There is literally no other book on the market that has the depth of these pages.

LaPointe’s palette for the foreground characters and scenes is equally as remarkable, fitting seamlessly with Msassyk’s painting and setting the tone for the issue overall. We feel Maps’ sadness in large part because LaPointe cues it, and as the witching hour tolls, we feel that as well.

Another chapter in the ongoing saga of one of comics’ most precious and entertaining reads, Gotham Academy: Next Semester #2 is the start of a new story that, while much more subdued that previous stories, is truly but a preface. As adventure ramps up, it would behoove us to prepare. It’s not always going to be this serene on campus.