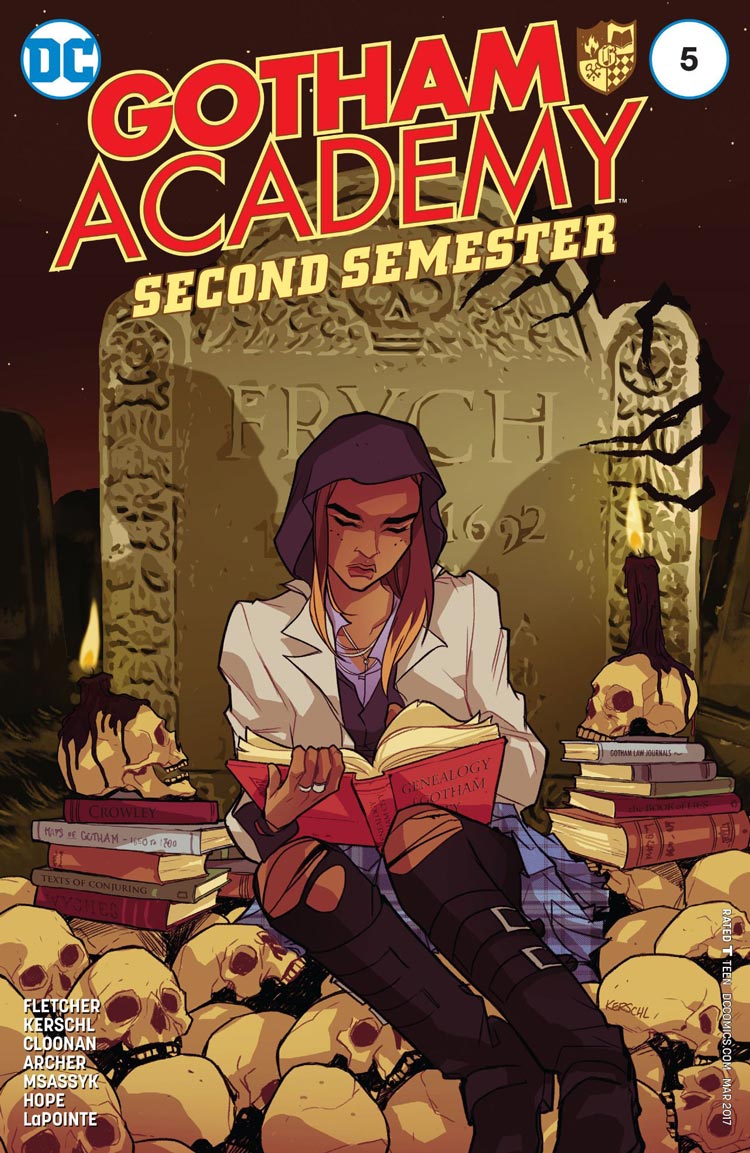 If there is any proof to the notion that Gotham Academy is an exciting place, even with a sub-par story, this issue gives ample evidence to support that idea. This can lead to two kinds of readers, each looking for different things in a given issue of the series. The first kind of reader will be the one who wants to know more about Maps, Eric, Colton, etc… They are going to be drawn into caring about the story, because the plot puts everyone into engaging situations.

This is, well … not a good comic for showing that off. The opening starts with a genuine amount of promise since the plot promises dramatic action. “Colton and Pomeline? Trapped? Oh no!” Here, however, is where things start to go wrong. The story requires the characters to escape from a threatening situation by means of the marked passages in the school. I am fine with that.

What happens, however, is that while the panels imply that Colton and Pomeline go through the passage together, we only see Colton emerge from on the other side into a new room. How does Pomeline get away? Was she behind him? It isn’t shown. This leaves me, as a reader, confused and then wonder what I missed. Pomeline is shown again, outside, while Colton encounters Headmaster Hammer.

This is only the start of the issue. Unfortunately, this is also the most exciting part. What transpires across the rest of the comic is just talking, punctuated by light sprinting. Colton’s encounter with Hammer leads him to be placed under an edict of expulsion. However, this is later allowed to turn into a formal hearing… a hearing that Bruce Wayne conveniently shows up for … and then does nothing of note.

The bizarre juxtaposition of nothing clear happening during the action and nothing of note taking place at all for most of the book is what is probably going to vex fans of the characters. They are being given too much dialogue, their plots are scattered, and with the ongoing plot of symbols and maps proceeding without a clear end in sight, this is not a story that, for this issue, seems worth reading.

Again, let me repeat: it isn’t worth reading if you are caring about the characters.

Now, did somebody say art? For the most part this issue, like every issue of Gotham Academy since the first #1 hit stands and digital marketplaces, remains a fantastic showcase of art and design, although there can be clashing between these two elements in certain areas.

The design of the comic, from Archer’s designs for the characters to LaPointe’s colors, remains a gold standard for imaginative delivery and scope. The snowy, blue-tinged world of the Academy itself remains a place I want to look at and gaze upon over and over. Unfortunately, close-up images, such as hands, or tight spaces within panels shows a glaring issue with textures that I am not sure is intentional.

Still, these nitpicks are balanced by the character designs which I adore. Yes, some line work and coloring seems sloppy, but I believe this is because the background work of Msassyk steals the show. The smooth painted feel of the ‘background’ world often clashes with the line work of Archer when examined up close, but the art as a whole remains the best part of Gotham Academy.