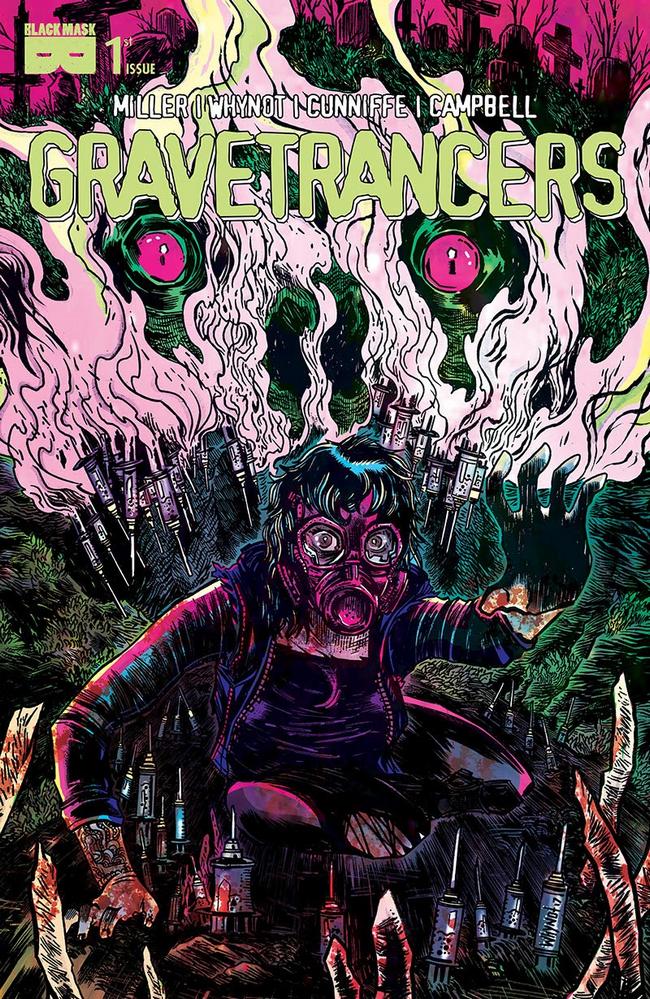 “We’ve all read the story where the guy ends up saving the girl or the girl ends up saving the guy and everything ends all hunky-dorey-like. Do you really want to read that story again? I certainly don’t.” Prepare yourself for absolute unsettling horror in this first issue of Gravetrancers!

Miller comes out of the gates swinging, delivering uncomfortable idea after uncomfortable idea. I love the siblings he introduces at the beginning – Maribel and Anthony. They feel so genuine and they even do the “you’re my favorite sister”, “I’m your only sister” shtick. It is truly devastating to watch them walk into an extremely off-putting scenario and know that something terrible is going to happen.

While I love Miller’s writing and his build up towards what the audience could feel was coming, I don’t think this comic would have been as impactful without the work of both Whynot as the artist and Cunniffe as the colorist. Whynot transforms sublime hysteria into an acid trip I’m happy I’m looking at in the morning rather in the middle of the night. While the psychedelic nightmares are upsetting in their own right, I feel the most disconcerting thing about the work Whynot creates is the casualness of graphic brutality. Those scenes truly strike fear into the viewer, which is the tone Miller was definitely going for.

I’ve read a few Black Mask Studios comics, and I’d say that one thing I truly love is their usage of bright coloring in their works, especially a particular shade of hot pink. Something about the color works extremely well in this comic, almost making it even more unsettling than it would have been with a more generic horror palette. Cunniffe’s work instills a sort of pop art feel to the issue as well, creating a vibe that reminds me of the horror elements of comics like Swamp Thing.

Also, is it just me, or does Jim Campbell work on like 40% of the things I read? I feel like I see him a lot whenever I’m looking at the lettering, and maybe I’m just randomly choosing work that he’s worked on coincidentally, But I just feel the need to commend the guy for working on so many projects.

If you like horror, you should definitely check out Gravetrancers. It’s a disturbing piece that will most likely end on an unnerving note and there’s something oddly refreshing about that, even if I do love happy endings more than terrible ones.