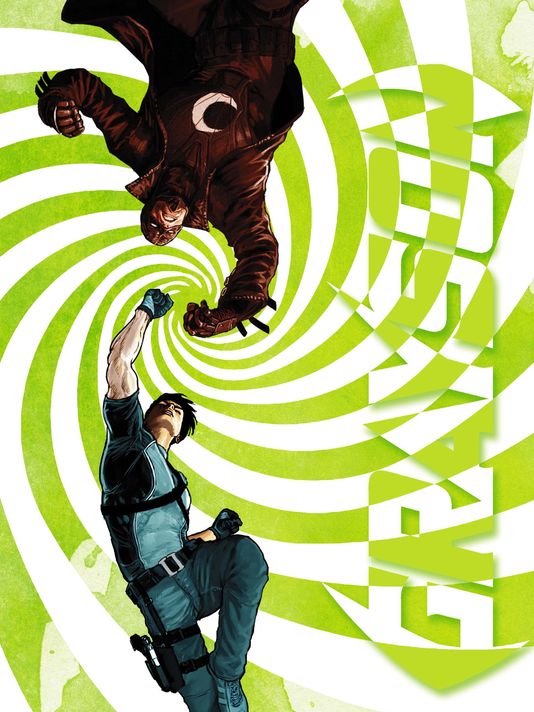 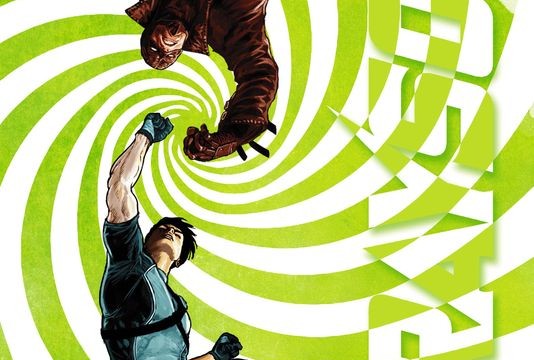 Every single time I read an issue of Grayson, I seriously wonder what god I appeased in order to deserve such a gift. To this day, I am still shocked that it is real. I’m really regretting not having listed it among my runners-up for Best Comic of 2014, because it honestly deserved it. Still, if it continues to do what it’s doing now, it’ll certainly be in the running for Best of 2015 at the end of the year.

What’s most outstanding to me about this run, and what everyone has been remarking on, is how unapologetic it is about being a beefcake comic—the androphilic gaze in Grayson is nothing short of legendary. There has been a lot said about, not just the objectification of women in comics, but also the dearth of men depicted in ways that are attractive to androphiles—in other words, the lack of beefcake relative to the myriad of cheesecake. It’s great that Grayson adds to the small pile of androphilia, but there’s a specific reason as to why that’s so amazing.

I’m sure someone will drop by and correct me, but I think this might be the first book that has taken a beefcake as a near statement of purpose, rather than just a thing that happens while all the women also look attractive. Kieron Gillen and Jamie McKelvie did a lot of work in that regard with their portrayal of Noh-Varr in his Young Avengers run, but it never felt like one of the primary focuses of the run like it does in Grayson. You read this comic and you know that the creative team are not just doing it, they are doing it on purpose and they are doing it seriously. That might turn off some, or maybe even many readers, but this reader absolutely loves it.

I love that a concerted effort is being made for Dick to not just look attractive, but particularly attractive in a way that would appeal to an androphilic audience. We get gratuitous—or, as I’d put it, necessary—shots of him shirtless, frequent commentary on how attractive he is. But then, we also get moments of how sweet he is. The previous issue depicted him shirtless in a desert taking care of a baby. I challenge you to find a more androphilic, and in particular female-slanted androphilic, depiction of a male character.

Of course, I say that, but the best line in this month’s issue about Dick came from male androphile Midnighter and that just rocks. We get plenty more beefcake this time around, even while everyone’s shirts manage to stay on. As far as I’m concerned—and I’m being funny here but I’m also not being funny—the existence of this book, the fact that Midnighter makes a direct comment about Dick’s physicality, are both victories for social justice.

Still, let’s say you’re not in it for androphilia. Let’s say that sort of thing doesn’t really matter to you. Fine. This run is still a success because the characterization of Dick is pretty much perfect, especially in this issue. Seeley and King have nailed it. We see multiple sides of our hero here—not just his typical devil-may-care attitude towards danger, but also how that attitude allows him to do his job. He is serious. He is hilarious. He is even quietly broken, if just for a second. He is a complex, multifaceted guy who also happens to be incredibly hot—and, heads up comic industry, that’s pretty much how women want to be depicted too.

To get into the specifics of the characterization, though, we’re afforded an incredibly well-written fight scene between Midnighter and Dick in this issue. One thing that I think Seeley and King have mastered is the idea that a fight does not ever have to be just a fight. We get some of this in the first issue, when Midnighter remarks that Dick “fights like jazz.” The fight in this issue calls that metaphor back and expands it in an absolutely fantastic way. The fight has narrative purpose and communicates something about who Dick is in a completely believable way. If you hustle any less than Seeley and King do, you’ll get something trite and forgettable. These two put in the work and it pays off in dividends for the readers—easily my favorite fight scene thus far and one that I think deserves to be held up as a classic characterization for Dick Grayson.

The one weakness in the story I would note is Minos, the Director of Spyral. We’re starting to get some background on him, but as yet, it is a touch clichéd. Without an incredible amount of specificity and emotional investment, a mystery man with a mystery past is more trope than storytelling. I’m sure that specificity is coming and that this is just a taster, especially as this secret background spills into the expanding plot, but given what I’ve seen the writing team do so far, I know they can be better. In addition, the main plot itself is weaker as compared to the characterization, but I get the sense that the writing team is the type that largely picks character over plot and I’m absolutely fine with that, especially considering that’s generally been the style of the book thus far.

Needless to say, none of the brilliant beefcake work could be happening without Mikel Janín. Dick is ludicrously hot from basically every angle because Mr. Janín is a paramount professional. This hotness, in terms of physicality and musculature, also ends up translating itself very well when it comes to fight scenes—for Dick and for other characters too. Dick is drawn as a pretty big guy but Midnighter is even bigger. The fight between the two is extremely physical and extremely believable. I can see both of this bodies moving through space exactly the way that Janín has drawn them and as such, the hits feel heavier and the stakes higher because I’m completely sold on its reality.

And yet! At the same time, coming back to the multifaceted nature of Dick, we get that as much through the writing as we do through the art. As much as I’m lauding the beefcake aspect, I encourage you to really watch how Dick’s face is drawn. There’s a moment in the middle of the fight scene where I can actually see the frightened twelve-year-old once-Robin hiding in the grown, now-super spy Grayson.

In addition, one of the great things about Grayson is that it is always interesting to look at. Plain, four-to-six rectangular panels are very rare in this book. In fact, glancing through it now, I’ve just noticed that it does not happen even once in this issue. Instead, the reader’s eye is constantly dancing in different directions, looking at scenes from different angles and different degrees of focus, especially in scenes with a lot of action. You’re given the effect of movement through the process of reading, even as you actually read about the movement itself—pretty cool, right? There’s also a great use of panel breaks whenever Hypnos, a hypnotic technique used by Spyral agents, comes into play. You’re sucked into the illusion and the weirdness of it all just as much as whoever happens to be put under the effect’s spell.

Colorist Jeromy Cox especially shines in the Hypnos scenes, but really, he’s just incredibly solid throughout. One fun aspect is that panel borders are almost always colored, as is what would normally be white-space on the page. I like it because it draws the entire space into the narrative, albeit subtly. Just like there are no standard panel structures in this issue, there also isn’t a single panel or page that isn’t framed in color.

However, my favorite part about Cox’s work is that he often eschews realism for effect—which is interesting, considering I just spent a paragraph talking about how realistic Janín’s art is. I can’t even begin to imagine how the line art for Grayson would look, because without Cox, it would clearly be a darker and less whimsical book. The whole thing is incredibly colorful, sometimes even luridly so, but in a way that works. We get characters drawn in purples and greens, pink swirls, blue zig-zags. Midnight is punching yellow while Dick is getting kicked in green—not exactly the sort of thing that you’d expect in a spy book, right? But then again, Dick Grayson is not exactly what you’d expect a spy to be in general, and I think these color choices work with that sort of message.

Grayson #6 continues to embody everything that is great about the run as a whole. What we have here is an incredibly progressive, fun, and well-written book that pretty much everyone should be reading, whose art and colors are doing things that are well-worth emulating in other titles. Do not miss it.