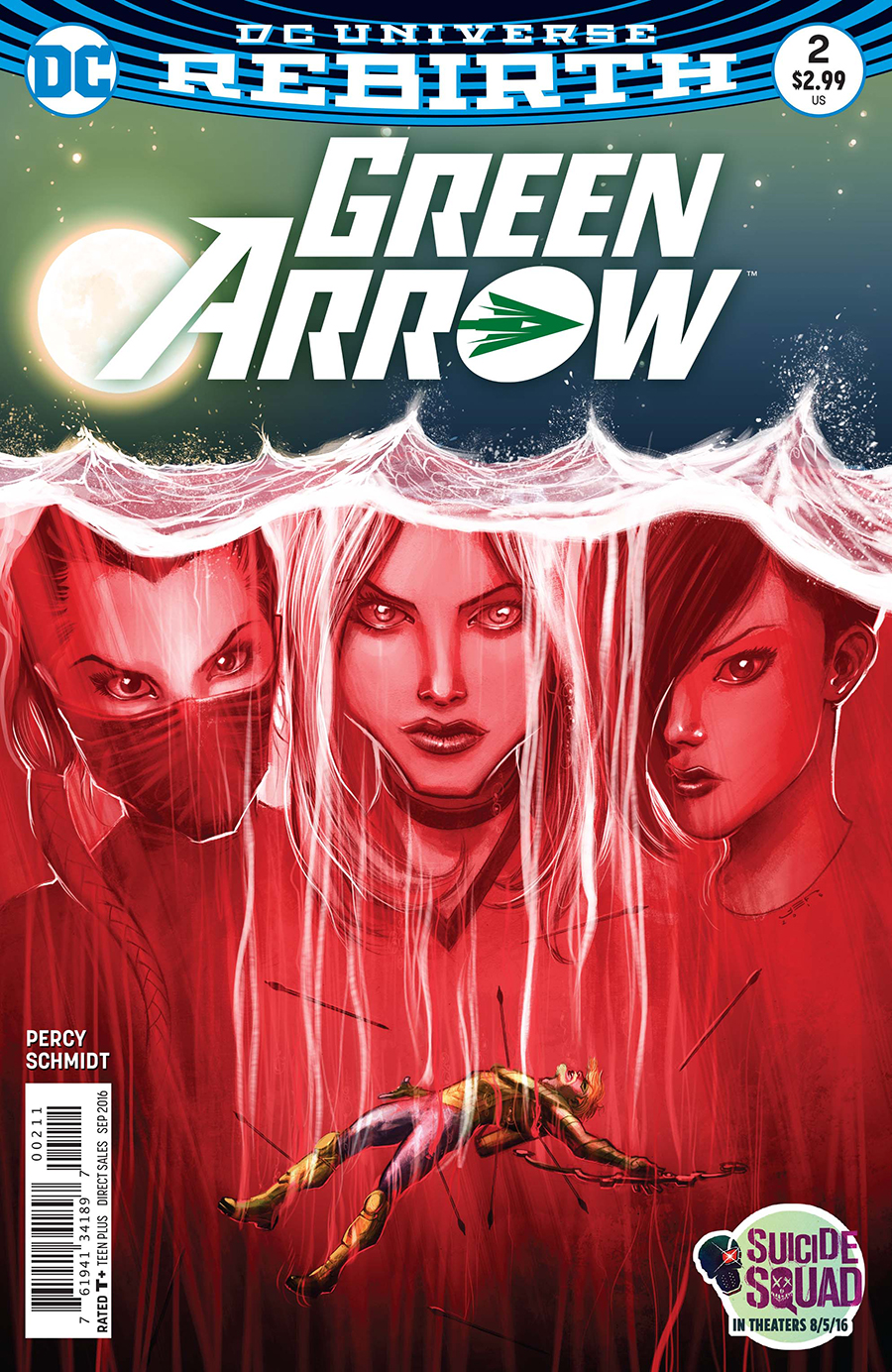 The buzz on Green Arrow coming out of Rebirth has been unavoidable and, for anyone who has sampled this comic can attest, contagious. I tried to resist, truly, I did.

Then I wound up binge-reading the two issues prior to Green Arrow #2 as well as this issue, all in one sitting, and it put a smile on my face. Well, half a smile, since I was sitting in the dentist chair, waiting for the shot to take effect so the dentist could take care of a crown.

As much as I want to like Green Arrow, I find our relationship to be a constant struggle. I really enjoyed the character under the creative auspices of Mike Grell. Yes, Longbow Hunters wasn’t the most gracious take on Oliver Queen, nor did it initially do much to properly add to the legend of Black Canary, but Grell’s art hooked me and was enough to keep my attention.

When Chuck Dixon took over writing, I continued to read, finding most of the issues enjoyable, if somewhat breezy. I lost track of Arrow with Connor Hawke wearing the hood, but tried again in the Brightest Day era. From there until now, I’ve sampled the adventures of the emerald archer, but none of Ollie’s trick arrows had the hook to draw me in or keep me reading.

Writer Benjamin Percy and artist Otto Schmidt (who handles ALL of the art chores) along with letterer Nate Piekos have crafted that arrow and put it in Green Arrow’s quiver. Setting the tale in Seattle, Percy and Schmidt appear to have crafted the entire world for Queen and his supporting cast prior to even approaching the debut issue of this series.

Green Arrow #2 truly feels like a peek into current events and their ramifications in Seattle, as this issue opens with the apparent demise of Oliver Queen.

Amazingly, Percy takes familiar and (perhaps tired) plot and subplot ideas and gives them vitality. Queen is declared dead, his company is in disarray, but his allies care about him and will not let his image be sullied. The supporting cast of this issue is strongly defined, each with personalities and mannerisms, both generated by Percy’s writing as well as Schmidt’s art.

Beyond that cast, the threat of the Ninth Circle is vast, dark, and undefined. It’s way to early to fully judge the organization, but it is clear that Percy is perhaps considering them as a Hand to Oliver Queen’s Daredevil. Or worse. Whatever the case may be, there’s potential for growth and a multi-faceted threat, which is an aspect of Green Arrow’s seventy-five-year history I do not recall ever caring about, but that lack of concern is indicative of a void Percy seems capable of filling.

As for the art, if the story hadn’t won me over, Otto Schmidt’s crafty artwork certainly would have. By camera angle alone, Schmidt exhibits an astounding amount of creativity, hitting readers in the eyeballs with cinematic framing choices and crisp storytelling beats. Whether it’s Black Canary checking out every inch of Oliver Queen’s boat for clues (all the while masterfully avoiding unnecessarily salacious drawings of the feminine street fighter despite her outfit composition and angles required for checking out a watercraft in dry dock) or Henry’s search for Emiko on Puget Sound, Schmidt mixes detail with impression, expressive faces and gestures with atmosphere, temperature, and color.

Piekos’ choice to use borderless word balloons infuses Green Arrow #2 with a burst of indie ambition that amplifies the energy present in Schmidt’s artwork quite nicely. Piekos takes that a step further by shading the word balloons when appropriate and adds in technically infused captions, such as when Diggle receives messages on the job or Canary performs an image comparison check. Schmidt and Piekos in tandem make Green Arrow #2 an exemplary read, but the fact that Percy is bold enough to stare down so many comic book tropes makes this comic even more compelling and makes me quite glad Green Arrow #3 is only a fortnight away.

So in one day, my wallet got hit twice: once for (Ollie) Queen and again for a crown. One I can highly recommend, the other I’m only going to strongly recommend you brush regularly and keep flossing. Personally, I am far more looking forward to getting additional adventures of Ollie Queen rather than any more crowns. DC has another Rebirth win in Green Arrow.