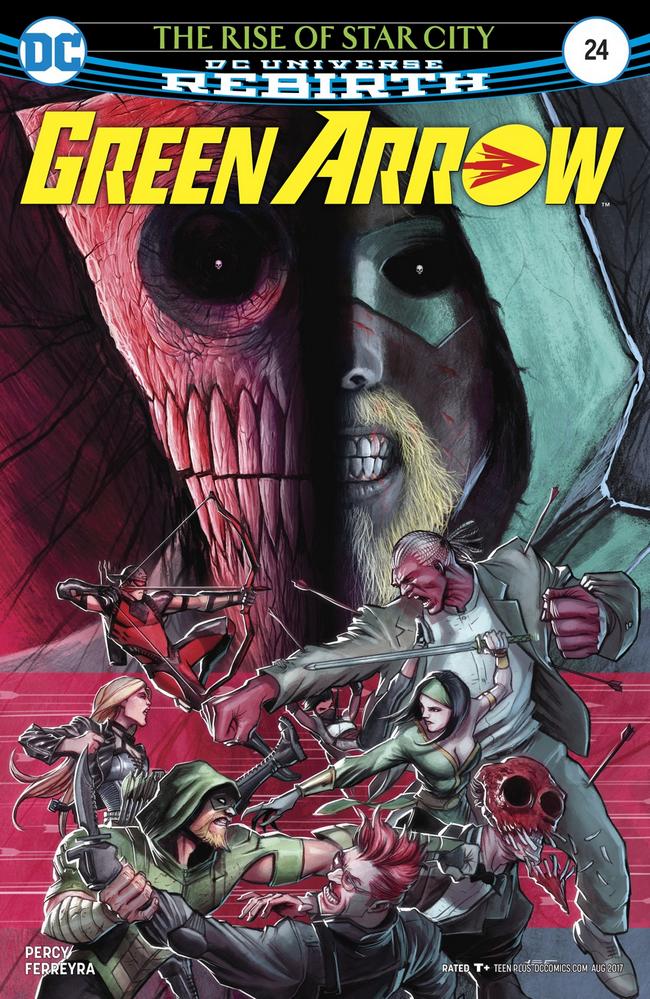 Arrows fly. Giants fall. Seattle continues to burn. Is this the end, or is this rebirth?

Percy and Ferreyra cap this arc off very well, opening up a messy new chapter for Oliver and putting and end(?) to the destruction of Seattle. This issue wraps up in a fiery blaze of glory, with mayhem going on left and right and Juan Ferreyra’s fabulous art making my eyes explode with every page.

This issue is exactly what was needed to bring the Rise of Star City to a close. Percy has been building to these moments for months now and the payoff is worth it. Is everything resolved? No. It’s as messy as ever, but it totally works for this book. It works for Ollie. Hell, everything Percy writes in this comic works.

One thing that impressed me with this issue is just how much of a team book it is. The “extended” cast of Canary, Emi, etc. all feel perfectly natural on any page, not like guest-stars in the issue that are distracting from the story that is playing out. It’s not like we’ve suddenly got Batman and Wonder Woman in the middle of this fray feeling completely out of place and derailing the story – this is the Green Arrow family dealing with the Queen family’s mess. And boy, what a mess it is.

I like that the creative team isn’t resting at all in this title. The cliffhanger at the end of the issue is a huge moment in this 24 issue run and it brings a lot of plot points full circle. Percy and Ferreyra make some bold moves considering a principal villain in this issue and it has a big impact. You don’t necessarily see this a lot in superhero comics, and I appreciate it big time.

Juan Ferreyra is a beast. At this point, I’m not sure how to properly convey how awesome his work is in this issue. I love how he plays with layouts and very few in comics can put together a double page spread like Ferreyra can. The aesthetic his pencil & colour work brings to Green Arrow is defining this run and he excels with every panel in this issue. People are going to remember the Percy/Ferreyra battery from this run in ways people talk of Snyder & Capullo on Batman – it is that damn good.

Green Arrow is an A-list comic. Percy and Ferreyra do a great job dialing into who Ollie is, what his family (literal and figurative) means and the Queen connection to the city. This is a wonderfully contained superhero story and they stick the landing for this arc with issue #24. Two dozen issues into Green Arrow I have never been this pumped to read the adventures of the Emerald Archer.