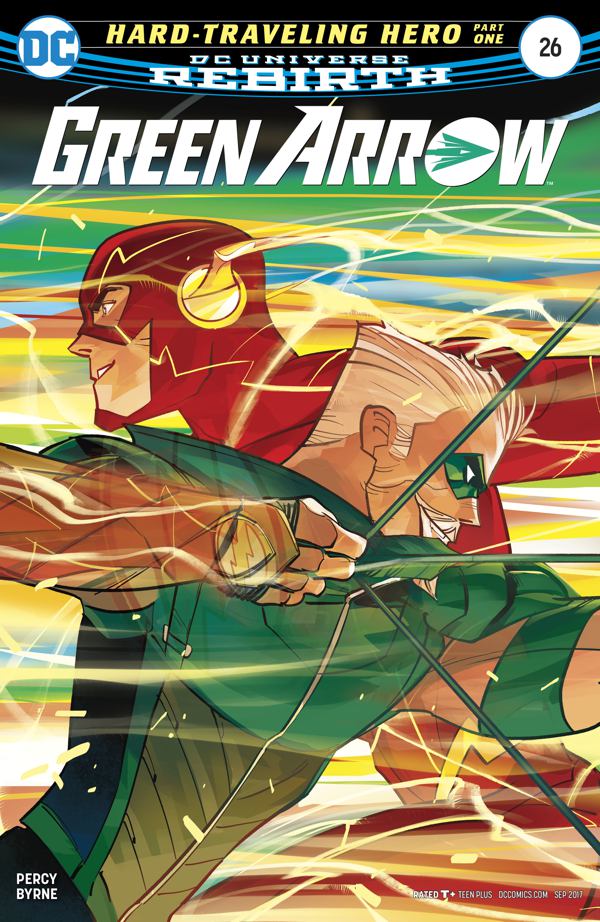 After turning himself into the authorities, Oliver Queen and skipped bail in order to clear his name. That leads him out into the wood, tracking the paper trail left by the Ninth Circle, who has framed him for murder. What he didn’t expect, was to be held up by the appearance of the Flash, who is investigating his own mystery.

Stephen Byrne’s art has a crisp, clear, visual appeal. There are strong, thematic color choices, juxtaposing green and red; Green Arrow and Flash. Orange is also used for a cutaway that lets readers know what Black Canary, Red Arrow and Kate Spencer are up to. Strong, restricted use of marks on character’s faces, clear outlines, blurred backgrounds for distance and key lighting with shading help to create dynamic scenes.

The animosity level between Green Arrow and the Flash is somewhat uncomfortable. You can tell that Ben Percy dialogue leans toward the jovial but calculated side with the dialogue. After all, Ollie has been rejected by the Justice League, there isn’t going to be a natural affinity between the characters, at this point. Flash’s overt lack of trust makes the dialogue feel hostile, in some places. This isn’t a Green Lantern / Green Arrow style team-up, right now.  There is also a repeated single line by Ollie, “… things are about to get worse,” that makes it unclear if there is suppose to be an extra emphasis on what Ollie was saying or if it was just accidentally repeated in the script or lettering.

A great inclusion, that has shown up repeatedly since the introduction of the Ninth Circle, is the levels of involvement people have with the organization. Percy has placed an emphasis on showing how some are not willing participants. Through blackmail, threats to their families, livelihoods and so forth, Percy’s stories continue to highlight how various lives are being destroyed. It’s a small detail that is once again laced in just a few short panels into this issue. This provides that much emphasis on the organization’s corporate corruption, looking to use then destroy all.

With the inclusion of the Speed Force and the tracking down and fighting of Ninth Circle henchmen there is lots of movement in the story. The actual fighting or action comes in a short burst midway as well as the climax. It’s a slow easement into what will hopefully show more team or combination fighting possibilities next issue.

Is it the start of a Rebirth bromance, Oliver Queen’s way into the Justice League or just another case of reluctant allies in the latest issue of Green Arrow? Since this is only the first part of the story, and Wonder Woman showing up next time, there is more to read and learn. Those who like seeing Ollie go ahead to head with super-powered heroes, and prove his worth will enjoy finding out.