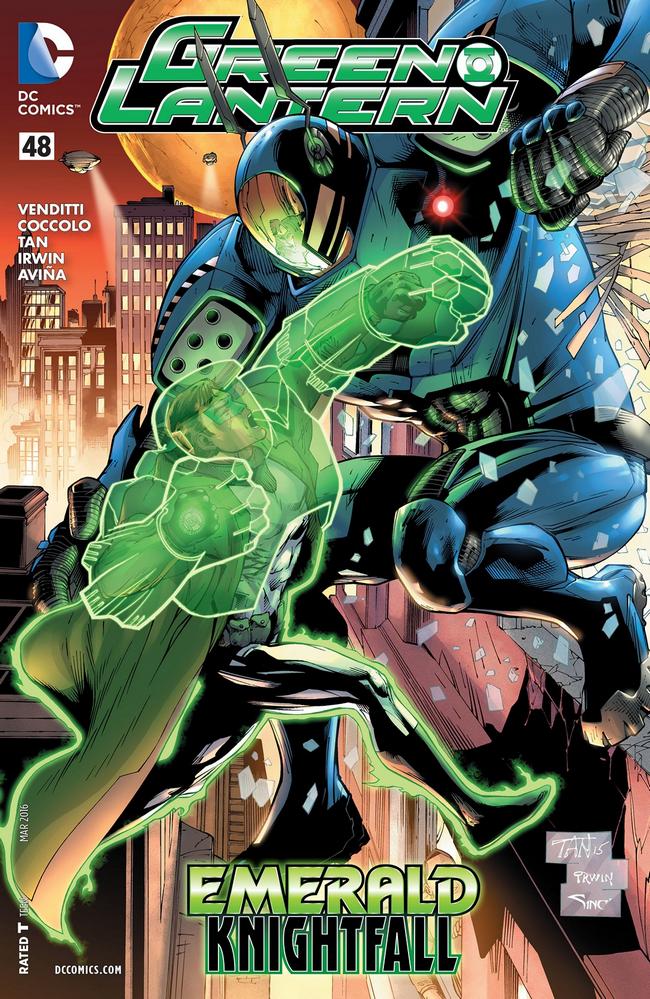 Hal Jordan hunts for those responsible for the bombing of Coast City, leading him to Gotham as he searches for information.

This issue of Green Lantern is pretty straightforward, with Hal charging headfirst toward Gotham to get Batman to dig up information for him. The interaction between Hal and Jim Gordon was surprisingly cordial, given the cover, though I was happy to see Venditti didn’t take this story down the “heroes fight each other and then decide to be friends” path. That said, their interaction is rather generic and Hal’s actions afterward are pretty standard. There isn’t a lot in this issue that makes it Green Lantern specific, and at this point in Hal’s return to Earth it feels like any DC hero could be in Hal’s place and this story would say the same. The cliffhanger at the end gave me some hope for the arc, but this piece of the story in and of itself isn’t overly thrilling.

The artwork by Coccolo, Tan, Irwin and Avina is fine, but also lacks some flair. Bringing Hal to Earth has seemingly dampened some of the dynamic visuals associated with him fighting all manner of madness out in space. Coccolo and Tan’s styles aren’t exceptionally different so there isn’t a huge shift when the duties swap, but each have some inconsistent moments on their pages. The brief amounts of action are where the issue hits its high points, but for the most part this is a slower tale. Tony Avina’s colour work is on point, but there aren’t many opportunities for him to cut loose like are typically seen in an issue of Green Lantern.

Green Lantern #48 suffers from being a middle chapter in an arc that isn’t taking many chances thus far. Bringing Hal to Earth is certainly not a bad idea, but this issue does little to make the conflict unique to this character or much more than a “find the bad guy and punch him” story. While the storytellers avoid the “heroes smashing heroes” cliche with Hal meeting Batman, the interaction lacks the fire readers are used to when Green Lantern ventures to Gotham. Overall, Green Lantern #48 is a middle of the pack, middle of the arc issue.