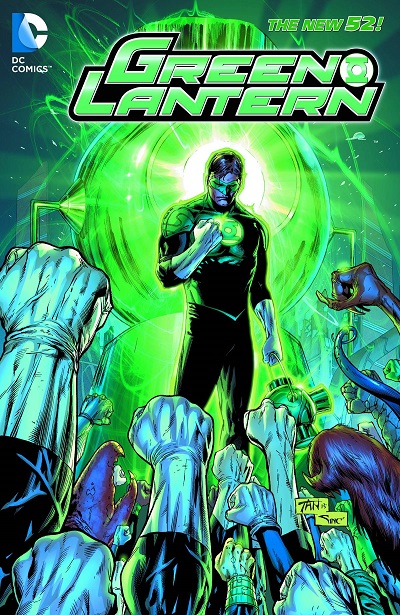 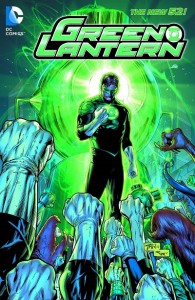 There’s a new kid on the block as Robert Venditti takes the reins of Green Lantern after an epic run written by Geoff Johns. Venditti comes in guns blazing and shows right off the bat that not only does he mean business, but that the future for Green Lantern burns bright.

Venditti inherits a Corps where the status quo has changed greatly. No longer are the old Guardians in play, nor are rings working in the same manner they used to….in this volume Venditti quickly establishes that the Corps is shook up, and that Hal Jordan is not the ideal leader they want or need, but he’s the one they’ve got. Green Lantern is a title that is at it’s best when the Corps is caught flat footed, and Venditti slams this weakened Corps hard from the get go. He writes new recruits well, and sets up some solid storylines very early in the collection. His dialogue is strong throughout the entire collection, and long time GL readers will feel right at home in the first issues of this collection. His Larfleeze is entertaining and he writes new recruits very well. Their naiveté is on full display and they add an interesting element into the first issues of this collection. It may be a situation we’ve seen a few times in the past with Green Lantern and Green Lantern Corps, but Venditti executes it well enough that it doesn’t matter. The collection includes the Villains Month issue featuring the newly created Relic, and with the Lights Out issues it is easy to see why Robert Venditti got this gig. In this crossover he shatters some fundamental pieces of the Green Lantern mythos in a very plausible way that never feels like a shake up for the sake of creating drama. The conflicts created through the introduction of Relic and the information he brings with him are very entertaining and, with this mini-event, Venditti has put his stamp permanently on this franchise.

A criticism I’ve had in the past of collections featuring crossovers is the lack of context for issues not included in this trade. Lights Out ran across all the Green Lantern titles and, rather than leaving readers completely in the cold, DC has added a hit list of the major plot beats that occurred in the other titles. While this doesn’t make up for reading the issues themselves, it does at least make this collection readable, rather than just a bunch of random issues with no context. It isn’t as fulfilling a story as reading the entire event, but the recap page is certainly better than nothing and will safe people who are looking to read Green Lantern only a few bucks.

On the art front, Billy Tan handles most of the art duties in this collection and his work, for the most part, is the best I have ever seen from him. There are consistency issues at times, but Tan excels whenever the focus is in space and the costumed characters are slinging their rings like there is no tomorrow. His art is very strong during the issues featuring Larfleeze, and he handles the massive cast well. His work is weaker during moments focusing on the un-masked faces of Hal & Carol, but most of the collection is set in space and he captures the grandure of that theatre very well. His style suits the story being told very well and a long run by Tan and Venditti is definitely a welcomed thought.

The colour work by Alex Sinclair, Tony Avina, Andrew Dalhouse & Wil Quintana is absolutely fantastic. The constructs leap from the page and their collective work brings a dynamic energy to the collection. Poor colouring sinks any GL title, and these four colourists never falter. This is top flight colouring that takes this collection to the next level, visually.

Green Lantern Vol. 4: Dark Days really shows that there is light after Geoff Johns and that Robert Venditti and Billy Tan are not messing around with this title. The duo have come in firing on all cylinders and this is a very solid read. I highly recommend readers who enjoy the last half of this collection check out Lights Out in full, as it is a very strong crossover event, but if you are looking to read Green Lantern alone you will get the highlights needed to know the status quo of the universe going forward. This is a strong debut collection for this team that proves readers have no reason to fear the quality of Green Lantern will decrease post-Johns.