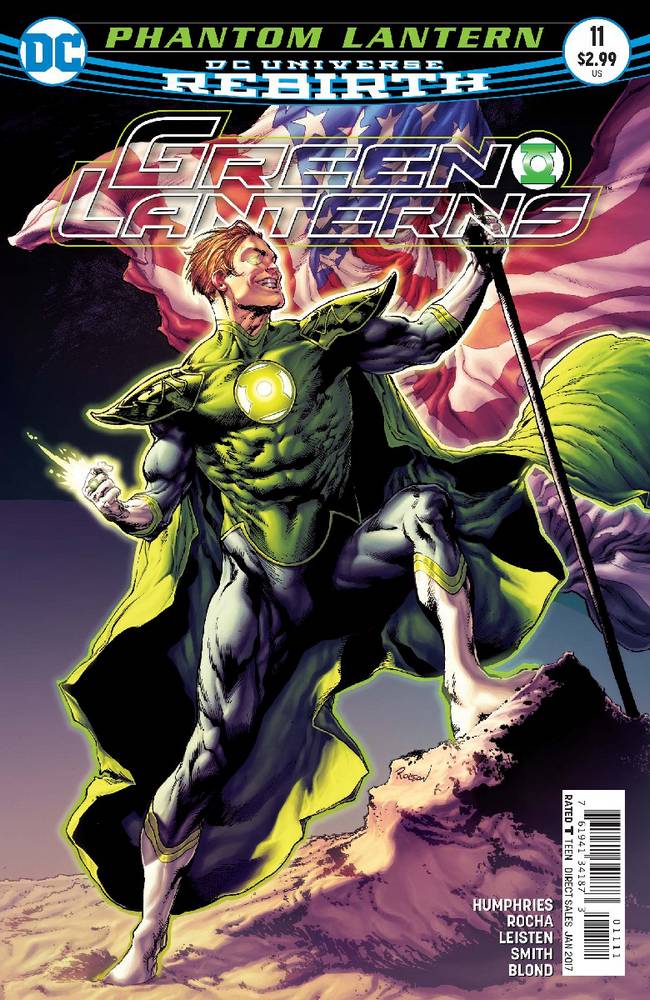 Simon Baz and Jessica Cruz have their first encounter with the new bearer of the Phantom Ring. Is he friend or foe?

Frank has taken on the guise of the new Green Lantern and travels the world enjoying his newfound powers while telling himself comforting affirmations. Simon and Jessica, meanwhile, hunt him down and confront him, leading to a breakdown.

There’s a really fascinating tale of privilege being told in this comic. Frank is not qualified to be a Green Lantern. We know this. Simon and Jessica know this. On some level, Frank must know this, too. But he spends the entire issue insisting that he deserves the Lantern ring, because he tried hard and believes in himself and good things always come to those with self-confidence. It’s a fascinating example of the meritocratic self-justification of privilege; I got it, so I must deserve it, and it must be because of my hard work. Never mind that, in this case, Frank got the Lantern ring he wanted by setting fire to a house, stealing the ring, and kidnapping a Guardian.

And on the other side of the coin, we have Simon and Jessica, who wind up questioning whether they deserve rings. Rings that actually chose them because they truly are deserving, unlike the ring Frank stole. We see this manifest as Impostor Syndrome. Frank questions how Simon and Jessica could be more deserving of being Lanterns than he, when Simon spent time in prison and Jessica can’t form a proper construct. And they both doubt themselves because of his words. That’s the power of White Privilege; two qualified people of color questioning their merit because they lack the self-confidence of a white guy who utterly lacks it. And, ultimately, the thing that convinces Jessica and Simon of their right to be Lanterns, the thing that sends Frank into a rampage, isn’t the impartial judgment of the rings; it’s the imprimatur of worthiness bestowed on them by another white man, Hal Jordan. It’s a fascinating story of how deeply baked into our psyches privilege can be.

The story itself flows nicely and the dialogue is well-written. It suffers a bit for being good as part-two-of-a-six-part-story, but perhaps not working so well as a standalone story. Still, if you’ve been keeping up with Green Lanterns so far, Humphries’ work continues to improve.

Robson Rocha’s pencil work is highly effective here. The way he draws Frank is especially off-putting, in an intentional way. There’s an uncanny valley aspect to the way Rocha draws Frank smiling. Frank’s mouth is just a bit too wide-open, he’s showing just a few too many teeth. It’s a great way of illustrating how Frank’s friendly heroism is just a facade, an act put on to mask the ugliness within him. Blond’s colors are, as usual, perfectly suited to the book, with ethereally growing constructs and bright primaries used throughout.

Green Lanterns is a good book that keeps getting better. Humphries is exploring some interesting themes and the book looks gorgeous.