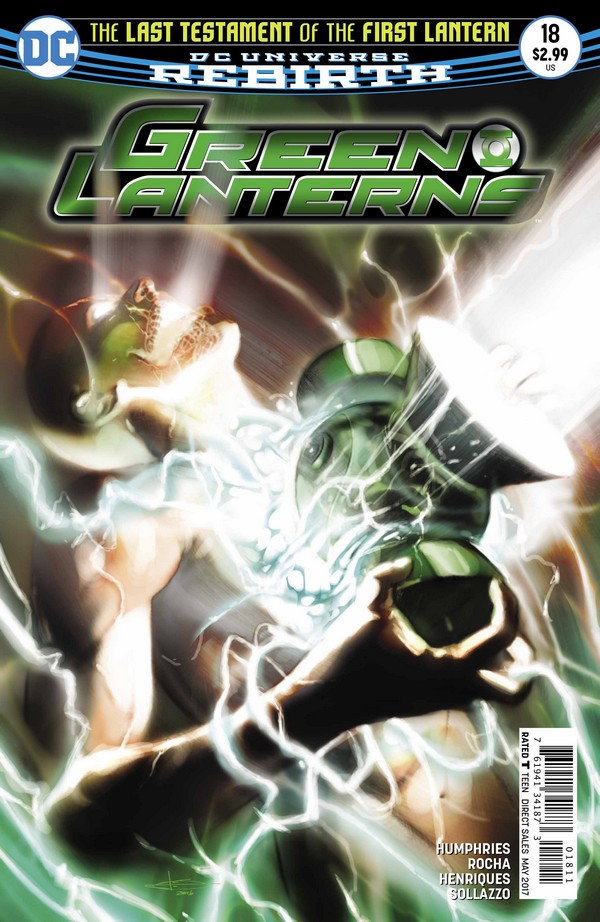 Learn the secret history of Volthoom, the First Lantern, now back from the brink of death to exact revenge on Simon, Jessica, and the Guardians!

This issue is entirely dedicated to giving the life story of Volthoom, a character introduced a few years ago as the first Lantern, who now serves as the hidden antagonist to Green Lanterns Simon Baz and Jessica Cruz. In this issue we learn how Volthoom, echoing Superman and any number of comic book characters who followed in his footsteps, was the last survivor of a dying planet, sent with a Travel Lantern that he could use to traverse time, space, and alternate dimensions. We follow Volthoom as he finds his way to the Guardians in the distant past, where he gives them the emotional mastery necessary to forge their various power rings. And we watch as he first becomes a lantern himself, then is imprisoned by the Guardians for being too powerful and dangerous to allow to be free.

Back story issues are not, ordinarily, one of the better parts of continuity comics. They often have the feeling of being perfunctory retroactive continuity, designed more to fill in gaps and mark time than to tell an interesting story in and of themselves. Green Lanterns #18, while not wholely bucking that tendency, manages the rare feat of being a back story issue that serves as a reasonably satisfying one-act play. We get the life story of the heretofore mysterious Volthoom in a single issue, and it sets him up nicely as a character of both great evil and great pathos. By issue’s end, the reader finds themselves sympathizing with Volthoom’s plight, while not necessarily agreeing with his actions, as the reader should with any good villain.

This issue is actually quite similar to Green Lanterns #9, an issue that paused the main narrative to give the life story of Frank Laminski, the man who would be the Phantom Lantern. That issue did a great job setting the table for the story arc to come, establishing character themes that would play out both with Frank and with the Green Lanterns. Green Lanterns #18 appears to be doing much the same, setting up themes of abandonment, betrayal, and the heartless aloofness of the Guardians that will, hopefully, be drawn out over the next story arc.

What really makes Green Lanterns #18 stand out, though, is its incredible, evocative art. Characters are rough and sketchy, and the colors contrast an overall dark pallette with ethereal glowing that makes every page striking. When the Maltusians gave their emotions to the power battery and the entire pallette shifted to bright greens and dull blue-grays I found myself lingering on the pages for minutes at a time. The creative team also illustrates the the Guardians’ betrayal by showing us just the Green Lantern insignias and the newly-created Lanterns’ glowing green eyes, a fascinating choice that puts the reader in Volthooms perspective, seeing Lanterns as sinister rather than heroic. It’s a gorgeous comic from start to finish.

Green Lanterns #18 is a great issue of a great comic. It’s a well-told story that serves as an intriguing bridge to the next arc, and the art is some of the best I’ve seen in a good while.