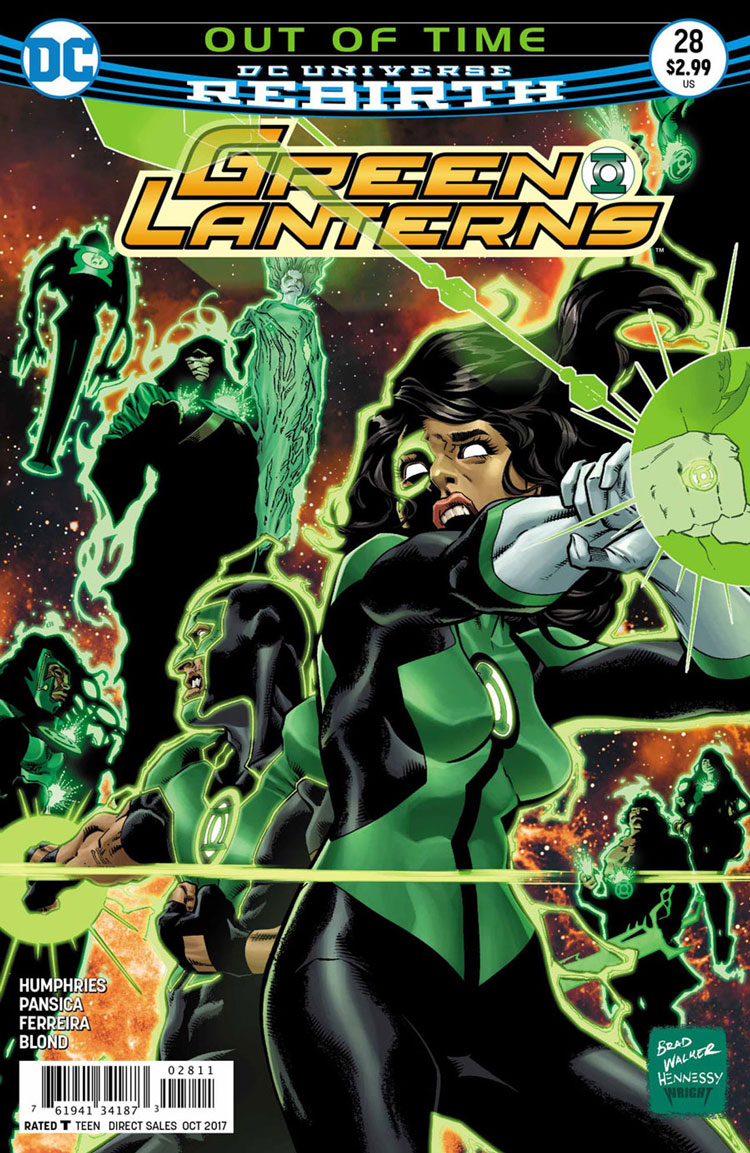 In the second part of “Out Of Time,” wherein Jessica Cruz and Simon Baz have been thrown ten billion years back in time, we get to meet the very first seven recipients of the Green Lantern rings.

It does not go well.

Our focus this issue is on Jan-Al of Krypton, a deeply religious woman with complete faith in Rao, the Kryptonian god. The ring chooses her after she saves the lives of her marooned crew by letting her faith guide her. We’re treated to an ethereally beautiful splash page of Jan-Al flying through space in full Lantern regalia. Eduardo Pansica does fantastic work with facial expressions, which is something of a lost art in comics, and Julio Ferreira’s inks teamed with Blond’s colors elevate the page to breathtaking effect.

Jessica has really flourished since her training on Oa, showing decisiveness and leadership. Simon, on the other hand, didn’t really do anything this issue aside from providing some narration. That’s a bit disappointing. Even without the ring, Simon’s the kind of man who steps up when he knows he should, and it would have been better had he spoken up alongside Jessica to present more of a united front in front of the First Seven.

Speaking of the First Seven, their designs are fantastic. Kaja Dox looks amazing, and Calleen interested me right off the bat because I really want to know how a plant-based life form would get along with Mogo.

Personality-wise, the first seven Green Lanterns are, as the hip youths of today are wont to say, “a hot mess.” Kaja Dox is a bit of a jerk, Brill is overly philisophical, and only Alitha seems to grasp the responsibility of wielding the ring. Z’kran Z’rann, whom we met in issue #24, is more or less Batman of Mars. Tyran’r is a power-hungry alpha male type, and Calleen only cares about her homeworld.

What really did not sit well with me was Jan-Al’s story. I won’t spoil it, but her behavior escalated without any real explanation and it felt as though a fascinating new character became little more than a warning label.

Green Lanterns #28 started out strong, with the promise of exploring new characters and letting them flourish, but the plot beats weren’t given much time to breathe and the conflicts felt rushed and their resolutions nonsensical. While ordinarily I love this series, I was disappointed in this issue. Hopefully it picks back up next month.