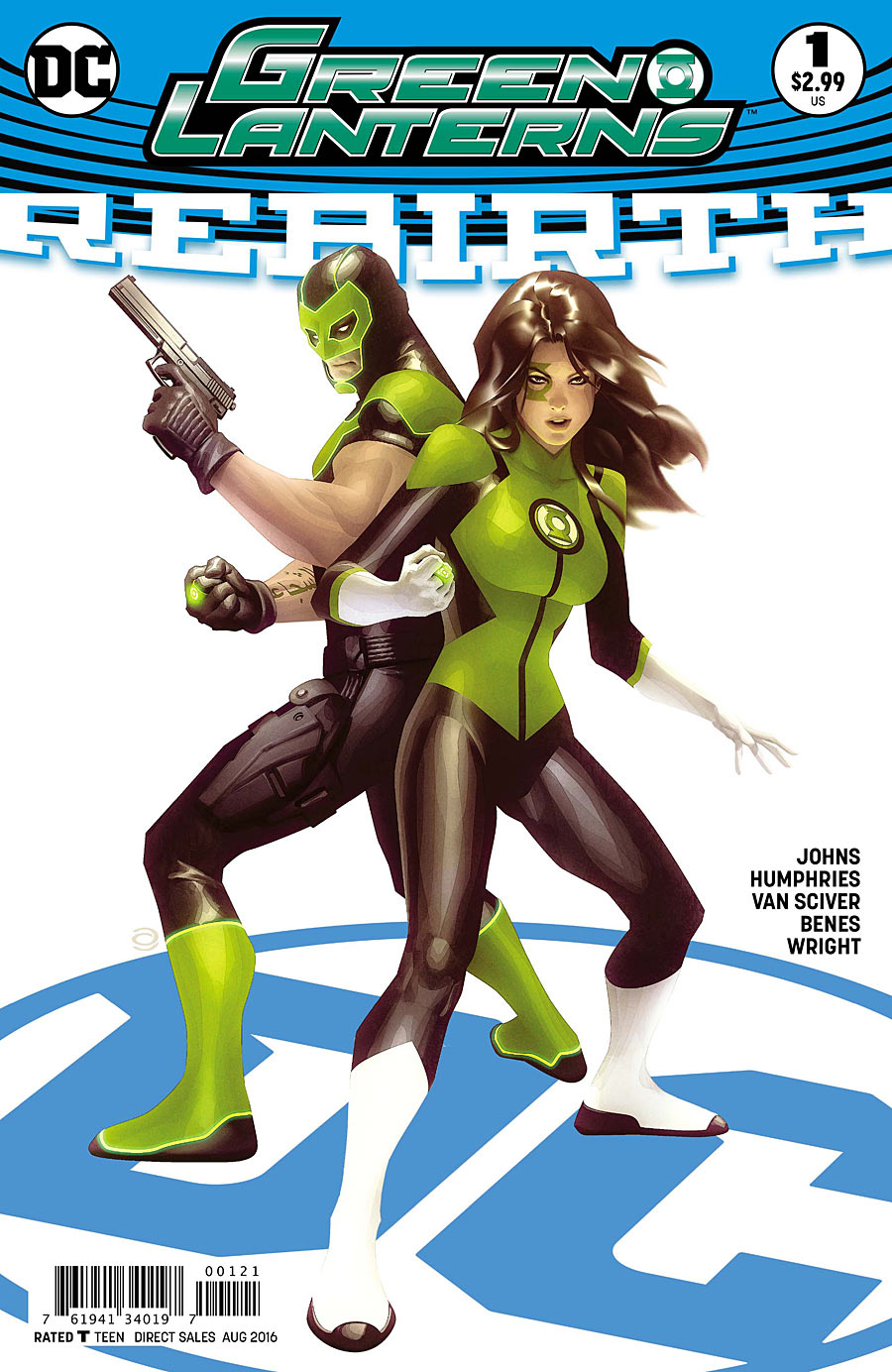 One Earth. Six Green Lanterns. But only two will remain to hold off the Red Dawn. And they’re going to have to learn to be Green Lanterns — and work together — along the way. Welcome to the Corps, Jessica Cruz and Simon Baz.

But seriously, it’s a fitting moment for Johns to hand over the reins of the Green Lantern franchise he built from scratch — starting with, of course, the original Rebirth — to the next generation of writer in Sam Humphries. And even more fitting to have that moment be all about two Lanterns Johns himself created.

Simon and Jessica are important to a lot of fans for a lot of reasons, and not simply because of their recency. As DC’s premier Muslim character who has long been waiting for his chance at the spotlight, Simon Baz has an enormous potential that we haven’t even seen the surface scratched on. And Jessica Cruz, the former Power Ring of the Justice League, is Earth’s — believe it or not — FIRST native female (and Latina) member of the Green Lantern Corps, a fact that hasn’t gone unnoticed for years and years. (Five guys were really close to those crash sites over the years. All the ladies without fear must have been on holiday.)

So, this is a big moment. For Johns to say goodbye, sure. But really, for Humphries to say hello and set his own course with two brand spanking new characters that now have to play off of each other for the foreseeable future. It’s not an unfamiliar dynamic narratively, and Humphries certainly gets them off on a rough start. The odd couple who need to work together to make it work. But the real trick will be where he takes it next.

Like more than a few of the Rebirth specials so far (Green Arrow excluded), Green Lanterns functions as a bit of a prelude only, relegating most of its pages to character introduction, seeding future plots, and setting up a brand new status quo. In terms of actual story momentum, we don’t get a lot. Nor do we have much of an insight into each character beyond surface.

In most instances, recap pages feel like a bit of a cheat in a new #1, but I feel like a lot of my interpretation of these two characters comes from having followed them through previous titles. And it leaves me wondering if a new reader would feel much of anything for either of them at their start. Certainly by comparison to their true first appearances, both Simon and Jessica seem to lack a bit of context — Simon’s past is alluded to, as is Jessica’s, but the emotions behind each traumatic event have grown cool to the touch.

The art duties split between Ed Benes on the first half and Ethan Van Sciver on the second, neither of which are the ongoing series artists, is a bit of a mixed bag. Van Sciver’s pages are characteristically elegant, with his self-inking maintaining that trademark sharp feel we’ve come to expect of major Green Lantern events of the past decade. It’s a pleasure to be able to have Van Sciver on loan from Hal Jordan, even for a few pages — and even if just for the pages Hal appears on. It gives a sense of history to the moment of passing the torch (or power battery, as the case may be) and is a true delight to have for that great final page reveal as well.

Benes’s self-inked pages featuring Jessica and Simon’s first meeting are fairly unremarkable by comparison to his usual work, unfortunately. The level of detail and smoothness I typically register when Benes is inked by a third party seems overlooked with Simon not particularly recognizable out of clothing. His action shots are well-structured, although Jessica seems oddly posed at times, with her legs in a half-standing squat on more than one occasion once donning the GL togs.

Overall, it’s a disconnect between Van Sciver’s hyper-realism and a less finished approach on Benes’ pages, that even colorist Jason Wright can’t quite smooth out. What isn’t in question however, is how luminous Wright’s colors are on Van Sciver’s pages, taking full advantage of the extra detail in the artist’s inking to weave shades and waves of green in and out of the backgrounds. It makes for a much richer experience overall.

A preface that feels only that, Green Lanterns: Rebirth #1 is a solid start — and delightfully rendered for its second half. Where Humphries and his art teams take the book next is the true test, but the bones of a great new adventure are here. Time to build a new era of Green Lanterns.