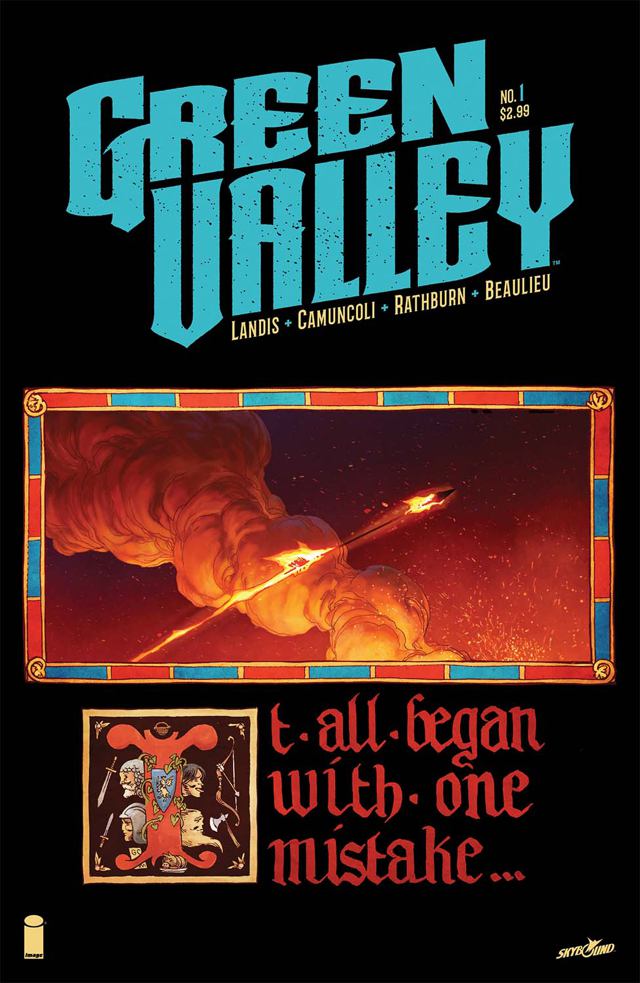 I just read a comic about knights and medieval barbarians, and I loved it. It’s not every day you can get me to utter those words, as period-style pieces tend not to grab my attention as much as other genres. But, when I saw Max Landis was penning a new series, creator-owned at that, and Giuseppe Camuncoli was going to be drawing it? I was there.

Green Valley #1 is a monster of a first issue, taking you on the battlefield to watch the famed knights of Kelodia take on an army a hundred times their size. With their cunning and skill in battle, the baddies retreat, and the knights return home to their kingdom. The four knights party it up, one of them newly engaged, until, well, tragedy strikes. I don’t want to say too much, because this issue is best read just going with the flow of the plot, as it unfolds naturally in a well-paced manner with each turn of the page, but, things get bad.

Landis has done it again. I thoroughly enjoyed his Superman: American Alien mini-series from earlier this year, partly because the characters always felt like I could pick them up off the page and hear them saying the things they did in real life (minus, you know, the superheroics). His dialogue is probably his strongest suit, as every line feels natural and the characters are incredibly genuine. Even when he has these badass medieval knights saying things that could fit just as well in the modern-day, he does so in a way that’s charming and authentic. You really feel the bond between the four knight friends, and it’s something that is easy to look forward to as the story unfolds. Each character has a distinct personality, just one issue in, a feat that not every writer can tackle with as much thoroughness and fun as Landis has here.

The story looks as beautiful as it sounds. Camuncoli is incredibly consistent throughout, drawing each character with easy to recognize features, but still keeping a realistic shine to the book. The four knights emote well, and there’s strong acting present throughout the issue. The action is easy to follow from panel to panel, yet I found myself stuck, staring at the finely crafted art at every turn. The backgrounds are immensely detailed, glowing with natural beauty, helped along by Francois-Beaulieu’s stunning colors. This book looks painted, but clear in its execution. The inks are delicate, but firm, and every page breathes a kinetic quality that only furthers the energy Landis is crafting with the dialogue and plot. It’s hard to get over just how polished every page looks, a true product of a team working together to create something beautiful that doesn’t disappoint once throughout the first issue.

This book was an immediate addition to my pull-list. While I wasn’t thrilled at first with the man-pain unfolding in the last few pages, I’m hoping that Landis will stay true to his words in his letter at the end that we have no idea what’s coming. I can’t wait to see these four friends battle through the toughest enemies as the story continues. What a truly exciting book this is.