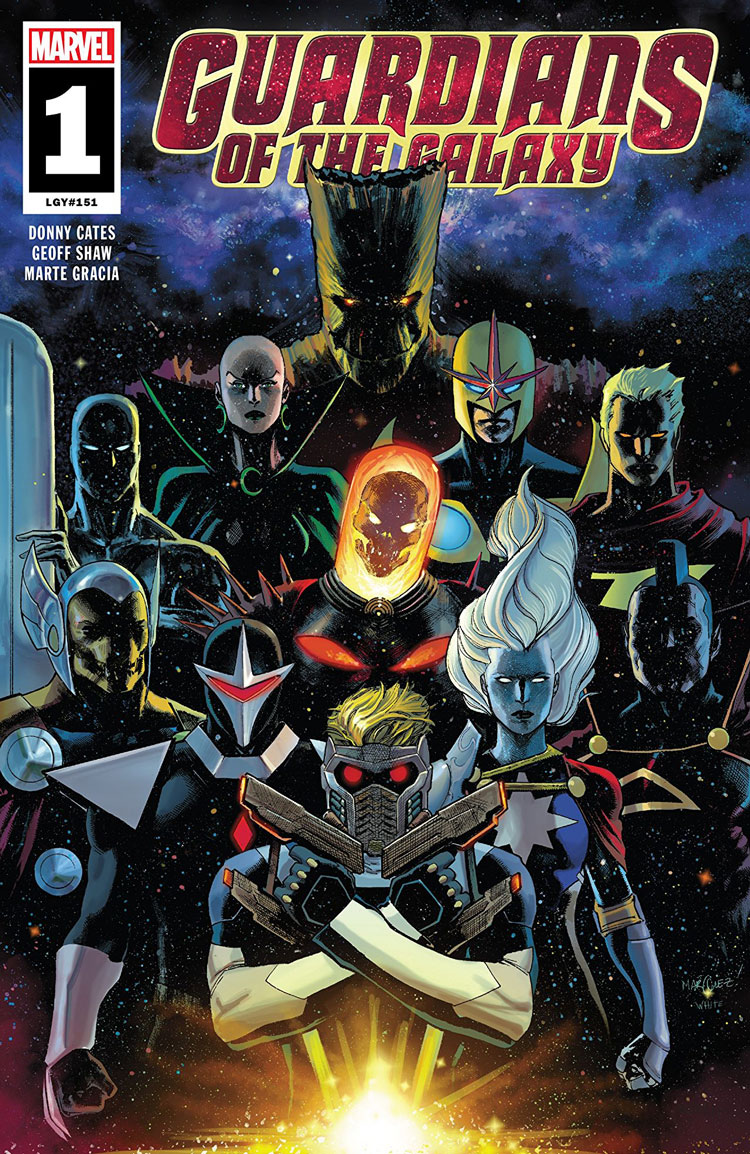 Since 2008, this is the seventh time I’ve reviewed a #1 issue of a Guardians of the Galaxy comic book (including Guardians Team-Up and Guardians 3000), but this time it truly feels like the entire galaxy is present. Written by Donny Cates and drawn by Geoff Shaw, with colors from Marte Gracia and letters by Cory Petit, Guardians of the Galaxy #1 takes the first steps into a bold new direction where the Guardians as everyone knows them are no more.

Following the events of Infinity Wars, Thanos is dead. His absence has created a vacuum in the Marvel Universe. That vacuum — literal and figurative — brings a crew together around Peter Quill, a.k.a. Star-Lord, hence a new Guardians of the Galaxy series. Getting there is part of the gosh-wow fun of comics as most of the cosmic beings in the Marvel Universe are present to hear Starfox deliver the last will and testament of his departed brother, Thanos.

That gosh-wow comes through in the Shaw-Gracia artwork, particularly in a double-page panel (not the whole spread, but definitely more than half of the spread, top-to-bottom) where readers are treated to Starjammers, former Heralds of Galactus, Imperial Guard, tangentially related Guardians and Guardians of the Galaxy adjacent characters. If the script notes from Cates to Shaw simply read, “Go nuts”, I would not be surprised. That one image is so chock full of imaginative characters designs from a galaxy of comic book creators, all amalgamated by Shaw, colored by Gracia, and given voice by Petit that is gave me pause and has had me flip back to it at least a half dozen times since starting this review.

And that’s just one image.

The story gives Shaw plenty of room to play. He draws a wide range of beings, from Moondragon to Ch’od, in a wide range of settings, from Knowhere and the Ryder to a gaping hole in the fabric of space. Shaw is remarkably adept at all of those settings and all of those beings, but infuses his style into the art nicely. He’s not aping any artist who has come before him, but certainly delivers influences of Cockrum, Starlin, Lim, and many more of the comic book artists who strode the Marvel cosmos before him.

The heart of this comic is Thanos’ legacy. Cates makes a bold move to introduce a number of concepts, bring in “all” the characters, and set up different levels of conflict. I’m not totally sold on his take on the Black Order, but I’m more than interested to see where he goes with them.

The creative team deliver a sequence of Thanos transmitted via hologram, that is bone-chilling, awe-inspiring, and gorgeous. It sums up Thanos perfectly in his death as to give his life new purpose and his enemies new fear. And then all hell breaks loose, as Cates, Shaw, Gracia, and Petit whirl around the scene, giving many characters moments to shine, from current sensation Cosmic Ghost Rider to one-time Thunder God, Beta Ray Bill. Every character given lines has a voice of their own, but Rider and Bill are given a little more room, high makes for some fun, dark-tinged interactions.

Gracia’s colors – both the choices and the execution – are stunning. The collection of characters present in this story and the events that shuffle through the pages of Guardians of the Galaxy #1 give Gracia a chance to color a comic that looks nothing like the other Guardians #1s that I’ve reviewed. Phyla-Vell’s cosmic complexion alone is worth your attention, but Gracia continues to paint the setting around Vell and all of the other characters at the core of this comic, elevating Shaw’s lines quite exquisitely.

Petit, per usual, letters like this comic depends on it. Every word balloon is carefully inscribed in typeface, deftly assigned a position, and wonderfully choreographed against the other balloons throughout Guardians of the Galaxy #1.