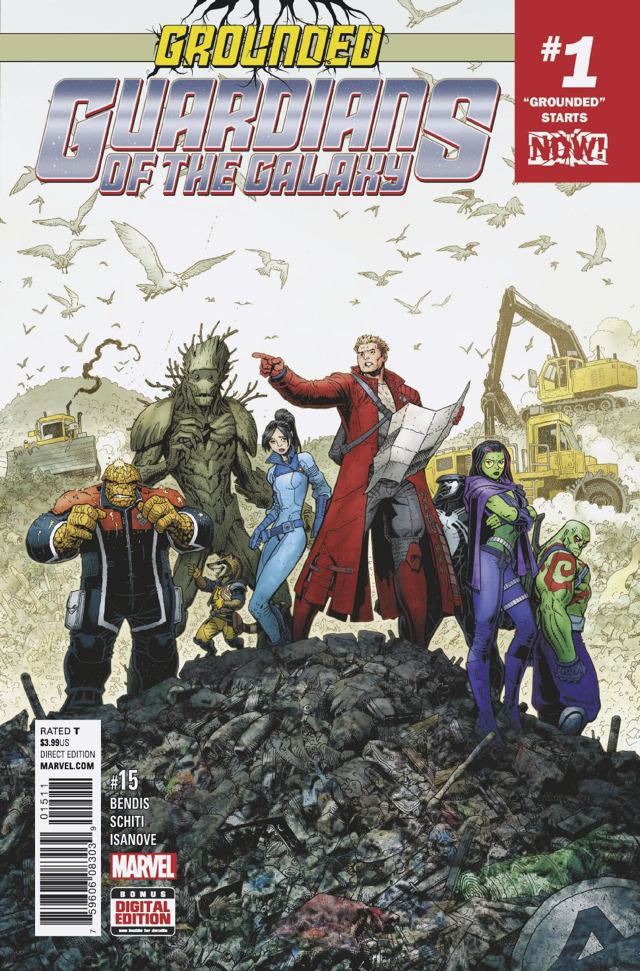 Here’s the thing with Guardians Of The Galaxy #15….it’s about the Thing. And that’s a good thing.

Bendis, Schiti and Isanove dial in on Ben Grimm for an entire issue as he (seemingly) transitions off of the Guardians roster and becomes an Agent of S.H.I.E.L.D. Being away from Earth hasn’t been easy on the big guy with the heart of gold, and when he’s given the chance to hunt down a newly reformed/reforming person he knows very well from his days in the first family of the Marvel Universe, well that’s going to make him question whether or not the Guardians are the team for him.

This issue really impressed me. Some Guardians fans looking for the rest of the Guardians may not be all that happy with the focus of this issue being on Ben, but I’ve always loved this character so I’m perfectly fine with it. Bendis is able to tap right into Ben’s font of pain in his chest: this gaping void that the disappearance of the Richards family has left in his core and it is heartbreaking to read. Schiti sells the pain in every panel, using amazing work where Ben’s eyes are concerned to simultaneously show his hurt and his huge heart…and how much he hates Victor Von Doom. Bendis and Schiti get this guy and where he’s at and they deliver a great Ben Grimm story with this comic.

So much so, that I really want this pair to launch a Ben Grimm, Agent of S.H.I.E.L.D. ongoing. I’m not kidding. Ben’s banter with Maria Hill is great and I really loved seeing Ben back in his neighbourhood. Other than Daredevil with Hell’s Kitchen, I can’t think of many other characters where a street and neighbourhood are such core pieces of who a character is like Ben Grimm’s ties to Yancy Street. Bendis and Schiti show how much Ben means to this neighbourhood and how many times he’s helped the people who live there, whether he knows it or not. The scenes with “common folk” and non-powered entities were some of the best in the issue and really delivered great moments showing who Ben is and why it’s time for him to be back on Earth.

From the first page to the last, Valerio Schiti’s artwork is phenomenal. This guy crushes it month in and month out with Guardians, but I really enjoyed how he hit the emotional beats in this one. More so than clobberin’ time action all the time, this was a more reflective take on Thing for the most part and Schiti nailed it. He sold the pain, he sold the joy and he sold how this guy just really doesn’t know what to do with himself, but how the S.H.I.E.L.D. offer could immediately give him focus. You don’t need dialogue to explain these things, Schiti’s artwork sells it completely.

Richard Isanove’s colour work is strong throughout the issue as well, polishing off the artwork and setting the proper mood throughout the comic. He works well with Schiti’s lines and they continue to be a really strong art tandem on this title.

Guardians of the Galaxy #15 could probably be rebranded as a Thing one-shot, but as Ben has made himself a member of the Guardians through this volume it does feel like a proper send off for the character, at least for now, I don’t know if this is “permanent”. Bendis, Schiti and Isanove deliver a great look at one of the most iconic characters in the Marvel Universe and throw down some serious storytelling clobberin’ time with this one.