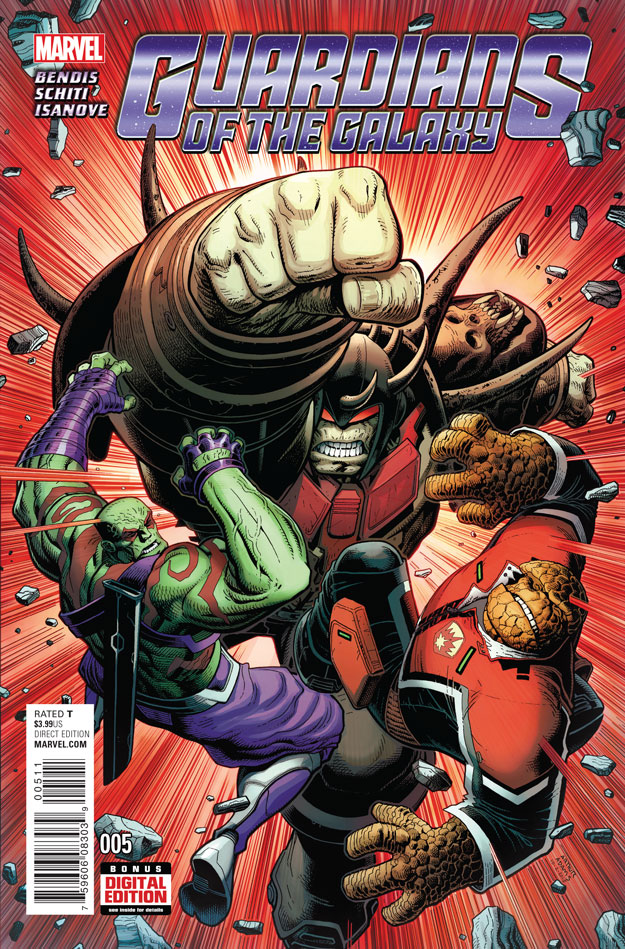 This comic is just a good ol’ fashioned cosmic slobberknocker. The Guardians, reeling from being pummeled are getting slammed once again as it seems they are pretty skilled at making enemies…

Brian Michael Bendis seems to be having fun with this team, or at least that is what comes across in his script. This madcap crew is at their best when surrounded by mayhem, and lucky for us that is quite often. Even though they still make no sense as a team, despite the core being together for years, part of what makes the Guardians work is the fact that they shouldn’t. Right now the team is a mash-up of the original crew, a prominent X-Man, Spider-Man’s teenage bully wearing the symbiote of one of his greatest foes and a founding member of the Fantastic Four. It shouldn’t work…but it does. Kudos to Bendis for making it so, because I can’t think of many other situations where such random characters are tossed together and it is anything but a hot mess.

This issue is pretty much just a brawl, but it works and is a ton of fun. We get some background as to who Yotat is and what his beef is with the Guardians, but even that features some brawling. The dialogue that connects the punches is great and this rock ’em, sock ’em fist fight works for this crew and where they are at right now. For Ben Grimm, especially, I feel this issue really cements him as a member of the crew and Bendis has a good thing going with Ben & Drax’s banter. It’s almost like a new Rocket/Groot relationship, and it really works well in this comic.

Valerio Schiti’s work is as flawless as usual and the wall to wall action lets him really go wild. While I crave a new design for a few special guests’ costumes, his pencil work never falters and he can easily handle the huge action and the humorous moments in this issue. Guardians of the Galaxy is one of the best looking team books being published by the Big Two, and Schiti’s work with Richard Isanove is a welcome treat each month. The two are able to build sprawling worlds with diverse characters and hit emotional beats for individual characters at the same time, bringing top flight work to the flagship book of the Marvel Cosmic world.

Guardians of the Galaxy #5 is a fun cosmic brawl with great action and great quips, well executed by our cosmic hosts Brian Michael Bendis, Valerio Schiti and Richard Isanove. I really like the current team dynamic and roster, and this first arc since the relaunch has been fun. Bendis’ humour and Schiti’s excellent pencil work make this one worth the price of admission and I’ll be back for #6.